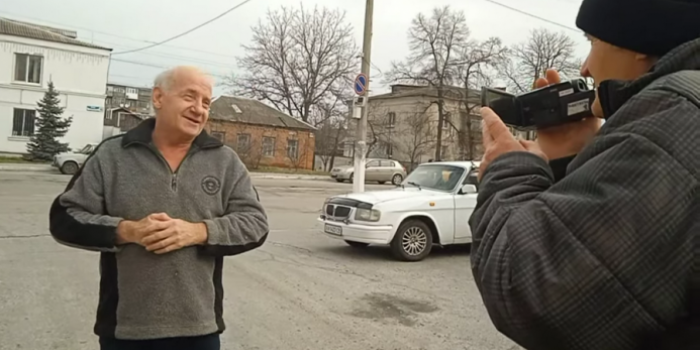 On March 2, he filmed a Russian tank convoy entering Savintsy and posted the video on social media. His wife, who always supported him in everything, started persuading him to stop filming the consequences of the Russians' stay in Savintsy. But Anatoly did not agree to this. Still, he moved to his dacha, hoping that the occupiers would not find him there.

The man was detained on May 28 at 6 a.m. He was visited by eight armed Russian soldiers with their faces covered.

The man managed to run into the barn and hide behind a pile of firewood. However, the Russians still found him and searched every corner of both his dacha and his apartment. They took away his video equipment and everything that caught their eye. They accused Anatoliy of adjusting the UAF artillery fire. The man denied the accusations.

He was first interrogated in the village council's garage, where he was thrown with a promise that an investigator would arrive soon. The investigator, unlike the men who had searched Anatoliy's home, had his face open and asked Anatoliy whether he had been giving the Russian troops' coordinates to the Ukrainian military. Unable to get the right answer out of him, the investigator ordered for electric wires to be attached to Anatoliy Gargatyi's toes and for the man to be tased through them. After the second "shock", Garagatyi fainted.

As soon as the man came to his senses, a sack was thrown over his head, and he was thrown into a car and driven to another barn – in Balaklia.

"My wife, having found out where I am, made five unsuccessful attempts to send me food and personal hygiene items. The Russians only approved of the last two packages. To top it all off, our fellow villagers turned their backs on her, afraid to taint their reputation by ties with the wife of an "undesirable" person and thereby share his fate. She became socially isolated. It was hard to bear the sidelong glances, the ostentatious silence, the outright silent treatment," the man recalls.

Cell No.3 in the Balaklia detention center at the local police department became Anatoliy's place of imprisonment for 100 days. The occupiers put eight prisoners in a cell designed for three people. In the summer, the cell was suffocating and cramped. The prisoners were fed plain porridge. They saw the sun for five minutes a day, while being taken to the toilet. Anatoliy Gargatyi lost 10 kilograms of weight during his captivity. Before being kidnapped, he weighed over 70 kg. On September 4, two days before the liberation of Balaklia, Anatoliy Gargatyi and another man from their cell were unexpectedly released. At the same time, the Russians threatened the blogger with death if he picked up a video camera even once.

Anatoliy Gorgatyi's home, like those of most Savintsy residents, remained intact.

"Of course, one can't forget living without gas for five months and cooking food in the open air, having no electricity for a month and a half in a row and living on generators. But that's all in the past now. Even my dacha survived. There were 'hits' indeed. A five-story building downtown was damaged, but the suburbs suffered more. There are many houses with crushed roofs. Three houses near the railway, where the Russian occupiers made a checkpoint, have also been significantly damaged. The 'Russian world' left a 'noticeable trace' in a village named Rakivka as well," the man says.

As IMI reported, on January 2, Yevhen Shybalov, a Donetsk journalist and volunteer, co-founder of the public organization "Responsible Citizens", was released from Russian captivity.