37% of jeansa in the regional online media outlets is from local level politicians: IMI study

The largest share of materials that have features of being commissioned by politicians is published in online media outlets of Dnipro, Kherson, Cherkasy and Poltava.

This is the results of NGO “Institute of mass information” study, which was conducted in 10 regions of Ukraine in July of this year.*

At that, most materials in regional media outlets that are likely commissioned are about local politicians. 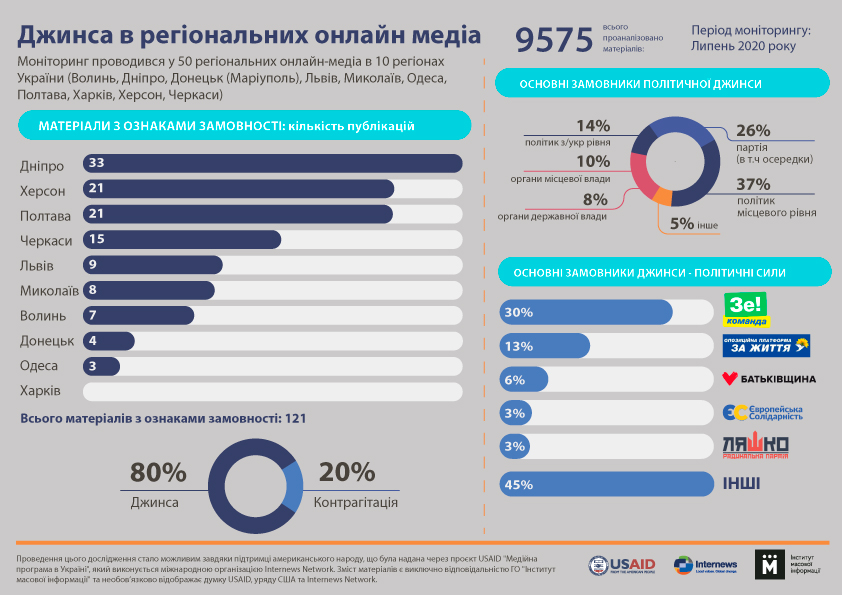 In Dnipro, such materials were 4.4% of all publications in the region, in Kherson - 2.7%, in Cherkasy - 2.6%, in Poltava - 2.4%. No news that have features of those being paid for were found in online media outlets of Kharkiv. Average indicator for commissioned materials in all regions was 1.3% from the total number of publications.

As to the positive materials that are likely commissioned about major political forces, the most active PR in the regional media was conducted by "Ze" team (largely at the cost of advertising the project “Large-scale development”) - 30% from the total positive materials that are likely commissioned about political forces, and Opposition Block For Life (13%). In 6% of such news, it was about representatives of the EU, 3% of similar publications were about representatives of Batkivshchyna and the Radical Party.

*Within the framework of this study, 9575 news were analyzed, of them 121 news that have features that lead to believe it was commissioned, 97 positive materials that were likely commissioned, 24 were counter-propaganda from 50 regional online media outlets in 10 regions of Ukraine (Volyn, Dnipro, Donetsk (Mariupol), Lviv, Mykolaiv, Odesa, Poltava, Kharkiv, Kherson, Cherkasy). The monitoring includes only news from the newsfeed of the online media outlets: articles, journalist investigations, analytics, blogs, op-eds, announcements etc. were not analyzed.

The methodology of the monitoring included analysis of the number of publications that have features of being commissioned in newsfeed of the regional online media outlets,  analysis of amount of positive jeansa and counter-propaganda, identifying main customers of positive publications that are likely commissioned (politicians of local level, Ukrainian politicians of national level, political parties (including their local branches), bodies of local government, bodies of central government, others), analysis of number of commissioned publications by parties and their representatives.

The monitoring was conducted in the following media outlets: