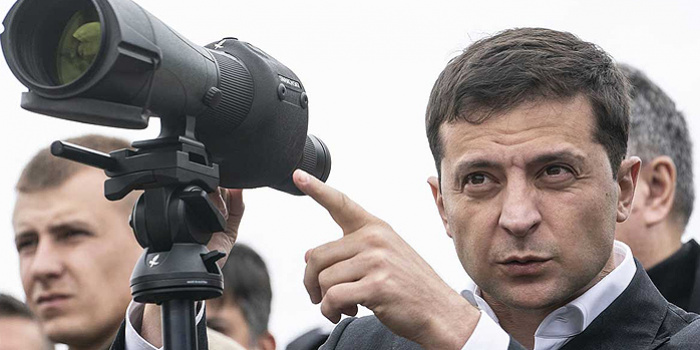 On October 1, 2019, the Trilateral Contact Group in Minsk agreed and approved a document which elaborated the so-called "Steinmeier formula, as Radio Svoboda reported.

For Ukraine, this document means introducing of the law on the special status of the occupied part of the Donbass after the local elections held there, in accordance with the legislation of Ukraine, and in case if OSCE observers confirm election being free and democratic.

If in Ukraine it caused a wave of indignation and another protests at Maidan, the mass media of the occupied territories took this information very positively.

On the "DAN" site, the news about signing followed one another:

As we have already written in the article “Elections or Special Status: How the“ Formula of Steinmeier ” is interpreted by the media of the occupied territories of Donbas” , for the politicum and, accordingly, the territories controlled by it, this means, first of all, granting these territories a special status, which requires amendments to the Constitution. On the pages of agency DAN it is reported by so-called Foreign Minister of the unrecognized DPR Natalya Nikonorova: "Kyiv must carry out constitutional reform to implement the Steinmeier formula."

The “Novorossiya” site transmits the Nikonorova's words saying that signing the formula is a remarkable victory for the self-proclaimed republics: “Despite the abundance of extremely destructive statements from Kyiv, we could convince the Ukrainian side to agree on the Steinmeier formula in the form in which it was written out at the Normandy Four Summits. This can rightly be called a serious diplomatic victory in the negotiations at the Minsk site - first of all because this step opens the prospect of further political settlement.”

There is a significant discrepancy in the vision of control over the border with Russia. If the Ukrainian media, in interpreting the formula, see Ukraine controlling the border with the Russian Federation, for example, it says "Ukrainska Pravda":   "We are not talking about the structure of these elections, but we as citizens understand that if we want elections to be held under the legislation of Ukraine, then there can be no machine guns and the border should be ours," the so-called propaganda sites "L/DPR" publish the joint statement of self-proclaimed heads of unrecognized republics Denis Pushilin and Leonid Pasichnik, who states that Ukraine would not get any control over the border: "We urge Mr. [President of Ukraine Volodymyr] Zelensky not to dictate to us the conditions. When he says that the elections in Donbass will be held only when Ukraine gets control of the border, he does not understand that it is not to him to decide when the elections will take place, but for we will do. The Kyiv authorities will not gain any control over the border , ”the heads of republics emphasized.

The self-proclaimed leaders of the so-called “L / DPR” also perceived as a negative news about the new law on the special status of the Donbas: “Mr. Zelensky also stated that a new law on special status would be adopted. It is interesting to know which one? We do not like many things in the current edition of this law, in which Poroshenko had put several unacceptable provisions. And these provisions and insertions should be removed from the law. But it also contains important provisions that cannot be changed under any circumstances. ”

One of the key provisions of the Steinmeier formula is the holding of elections in the non-controlled by Kyiv areas of Donbas, but the local media and, respectively, the self-proclaimed L / DPR governments keep being silent about it.

The vision of the formula by the Ukrainian authorities is also incomprehensible for now – the President Zelensky's briefing left more questions than answers.