The year of the corona crisis has significantly affected the online media market. In March-April, the websites traffic increased by an average of 30-40%, and for some websites did even twice. However, after the end of strict lockdown, there was an even greater decline, an average of 12% compared to the pre-lockdown period.

As a result of such "roller coasters" three leaders of Ukraine websites traffic have replaced one another in the space of eight months in 2020. These are the results of a study held by the Institute of Mass Information to survey the top 50 Ukrainian online news media in terms of websites traffic.

IMI experts analyzed data from SimilarWeb . This site, in its turn, analyzes the traffic of more than 80 million websites from around the world and provides open access to the general statistics of this traffic. Here are the results of a study of the traffic of the 50 most visited Ukrainian online media.

Recently, SimilarWeb  made public the latest statistics of website traffic in August 2020. Based on these statistics, IMI compiled a rating of site frequency of Ukrainian online media, which follows:

Why the list is made of 49 websites? Because one of the 50 topsites is BBC Ukrainian service. But SimilarWeb does not make open to public the separate statistics for BBC News Ukraine, but only for the BBC.com domain.

As noted above, in 2020, as many as three media outlets replaced one another at the top of this ranking. Thus, in February, the front-runner in terms of hits was Obozrevatel.com (32.9 million hits), during the next two months, it was rbc.ua (58.2 million hits in March and 52.1 million hits in April). In May, Ukrayinska Pravda got the top position with 49.09 million hits and held that position untill August.

IMI compared the latest online media rating with the data of the 2018 rating list.

The change of leaders of the top ten looks like this: 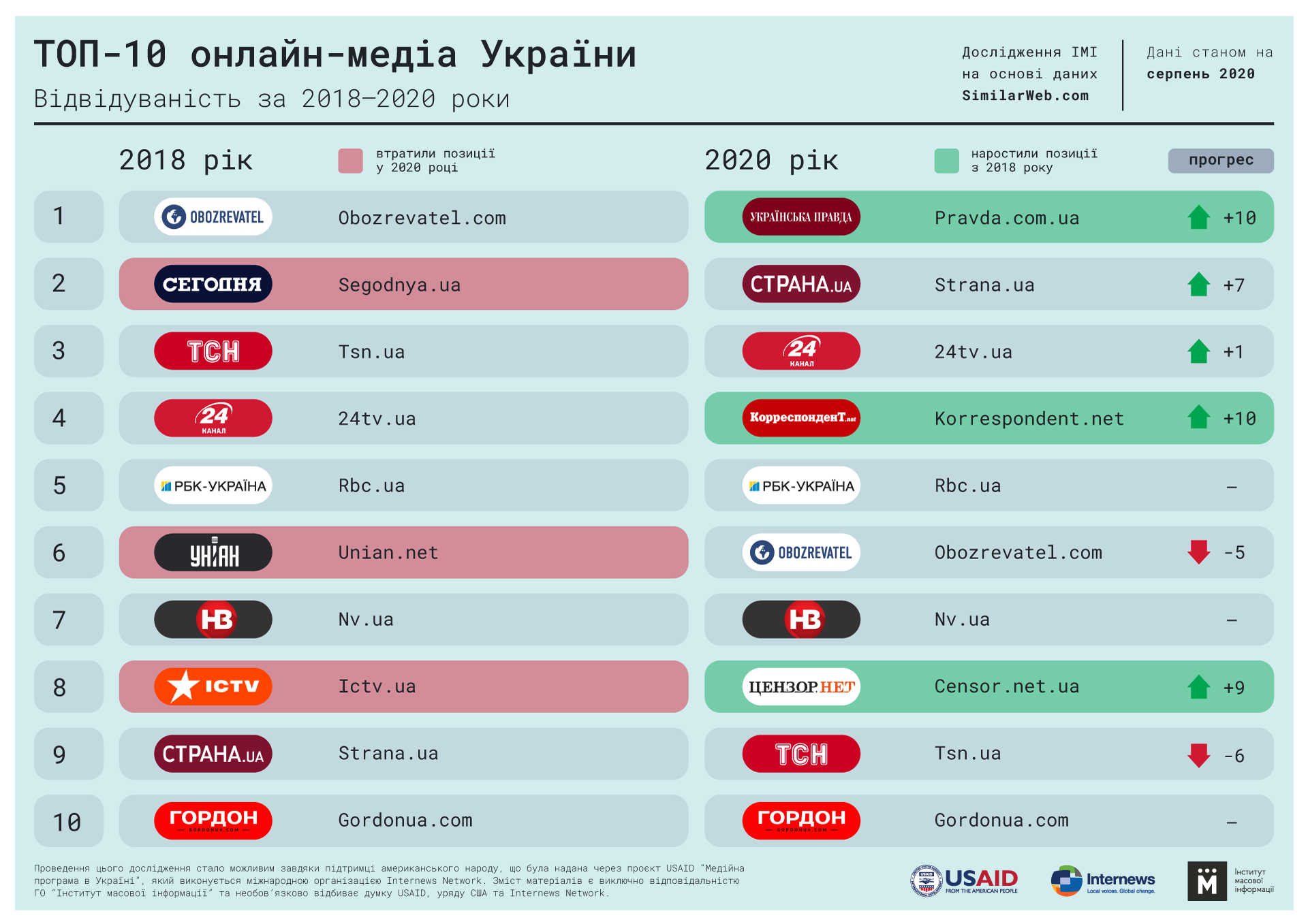 As you can see, the sites Segodnya.ua, Unian.net and Ictv.ua dropped out of the top ten list. They have been replaced by "Ukrayinska Praavda" (rose by 10 positions), Korrespondent.net and Censor.net.ua.

Pravda.com.ua got to the top due to a record increase in traffic. In August, Ukrayinska Pravda got by 3.49 million more hits than in February. The websites Liga.net (+5.53 million hits for the same period in 2020) and Gordonua.com (+3.66 million) also showed the greatest progress.

As to relative indicators, the largest increase in traffic frequency was shown by the site Liga.net: in August 2020, the website got 2.3 times (230%) more than in February.

The highest traffic frequency for top 10 websites is seen from Ukraine. However, if for Obozrevatel.com these figures are 88.61%, so Nv.ua has only 63.67%.

Russia is the second country to provide traffic frequency to Ukrainian websites. Only for Rbc.ua the users from Russia are not among the first three countries that provide the most of hits. The most hits from Russia got: Korrespondent.net got 13.81%, Gordonua.com got 11.21%, Strana.ua got 11.16%.

The top three countries that provided the most traffic for Ukrainian media in August 2020 were the United States, Belarus and Kazakhstan (only for Rbc.ua - 3.68%).

As to shift toward other sites, there is no such unanimity.

As you can see, from Pravda.com.ua most visitors go to the related site epravda.com.ua. And from Censor.net.ua and Gordonua.com they switch to its youtube.com, since there are its own stories of these media on their YouTube channels. And only Strana.ua is the leader in transitions to Russian resource smi2.ru: every fourth reader who left the site "Strana" in August, switched to smi2.ru.

As to social networks, the biggest frequency traffic for the top 10 sites is provided by Facebook. In Rbc.ua has 89.83% of readers who come from Facebook. Instead, RBC-Ukraine is the only site where Twitter is not among the first five social networks from which readers come to.

YouTube is the second social network that provides the most switches for top 10 sites. It is from YouTube that every third reader of Korrespondent.net and Tsn.ua comes from among those who visit these sites from social networks.

The part of transitions from Odnoklassniki.ru from all social networks is the largest for Obozrevatel.com (8.53%), from Vkontakte is for Korrespondent.net (15.39%).

SimilarWeb notes that search traffic for four sites is on a paid-for basis. That is, sites to attract traffic from search engines are paid by some or other keywords, which search results lead to this site. SimilarWeb recorded the most "paid" readers in Rbc.ua. 0.18% of those users who come to the site from the search engine, are identified as “on paid-for basis” by SimilarWeb. Korrespondent.net, Tsn.ua and Nv.ua has 0.01% of the readers of the kind.

There are three other key indices as it is defined by SimilarWeb This is the time spent by visitors on the site, the number of pages viewed on the site and the failure rate (indicates the percentage of visitors who left the site directly from the login page or viewed no more than one page of the site). These indicators are summarized in the following table:

IMI plans to regularly evaluate the ratings of Ukrainian online media traffic and the sources of their traffic.

This study was made possible by the support of the American people through the USAID Media Program in Ukraine project, which is run by the international organization Internews. The contents are the sole responsibility of the Institute for Mass Information and do not necessarily reflect the views of USAID, the US Government or Internews.