Only 1.7% of national media that published opinion polls complied with election law. And every fourth story with the ratings of the candidates and parties had some attributes of being ordered.

These are the findings of the monitoring in 20 Ukraine websites * that published opinion polls. The online service Semantrum was used for this study. The research period was October 1-22, 2020.

During this period, 178 stories were found, which had the results of sociological research and ratings of participants in the election.

Total violation of the law

One of the manipulation tool during election campaigns is the public opinion polls. More precisely, manipulation of the ratings of election nominees.

To do this, political technologists use both pseudo-sociologists and mass media to spread fake ratings. 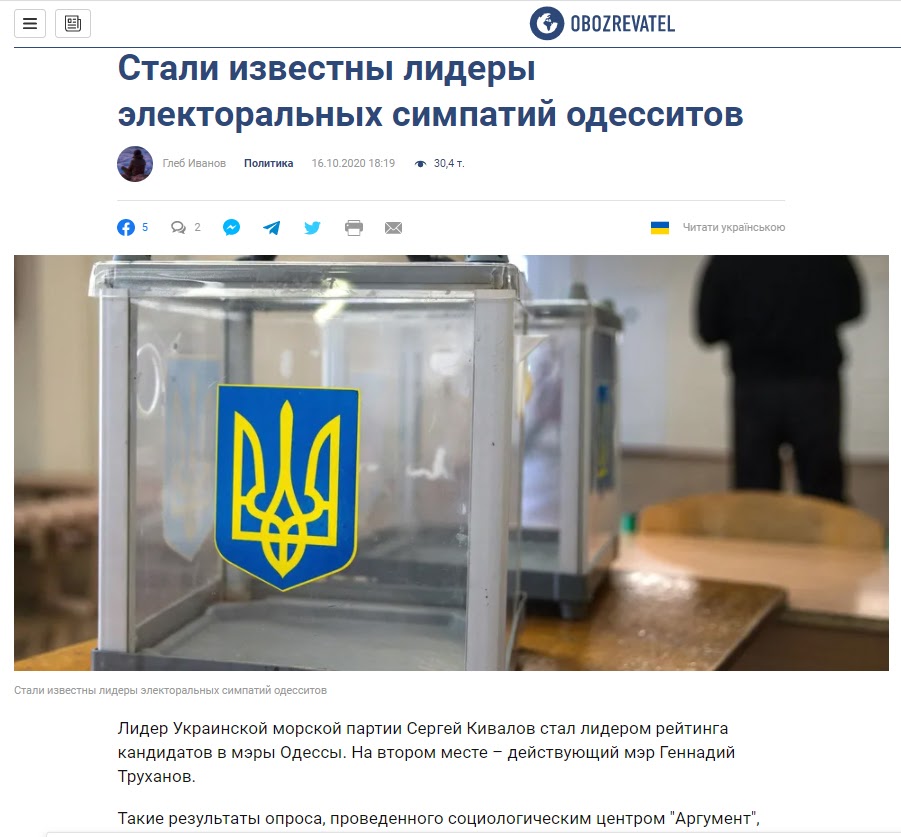 They are also trying to fight against ratings manipulation at the legislative level. Thus, the Law "On Local Elections" for the media establishes the peculiarities of disseminating information about the results of public opinion polls. Article 53 of this law specifies nine points that the media must cite while publixhing the results of social surveys: starting with the name of the company that conducted this survey, and ending with a margin of error.

IMI's research evidenced that during the last election campaign to local authorities, mass media almost absolutely failed to comply with these requirements. Only three stories out of 178 contained all nine items. Instead, 10 pieces did not contain any of the items required by law, another 36 - indicated only the name of the sociological center. 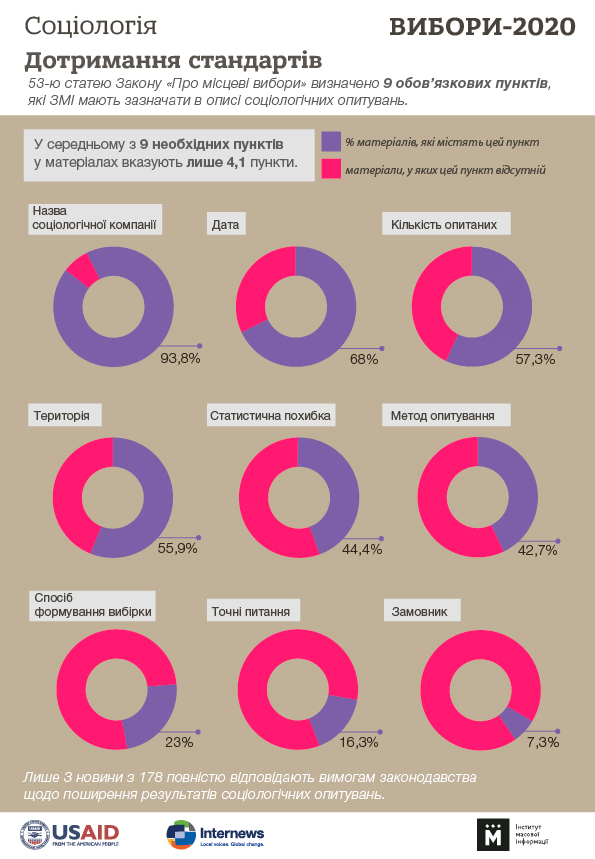 Also, the IMI study revealed three news items that contained eight necessary items (except for the customer of the survey), but at the same time haveattributes of an order:

-A few days before election day, the website znaj.ua published the results of a survey of Vinnytsia residents that would be conducted by the public organization “Koncept”. According to them, the current mayor Serhiy Morgunov had a rating of 23.8% and had to go to the second round with the candidate from the "Servant of the People" party Serhiy Borzov - 17.5% of the city's support. Instead, according to the election results, Morgunov won in the first round, and Borzov took only third place (according to the exit poll of the Savik Shuster Studio, he got only 9%).

-On the same day, the same site came out with the results of a survey by the sociological service "Rating". And although the poll is correct, the news for itself shows some signs of order from the party "For the Future".

-On October 13, the 112.ua website published the news " Five parties are running for parliament, the gap between the “Servant of the People” and the “Opposition Platform - For Life” is narrowing, RTS poll reports”. There are also signs of ordered news by a political party - OPFL. In the same social survey, the sociological company RTS was interested to get the opinion of Ukrainians about the Russian vaccine against coronavirus. Earlier, the Institute of Mass Information reported that pro-Russian forces have launched a wide-ranging campaign in Ukraine of fake news and manipulations about the need to negotiate with Putin on this "vaccine."

Sociologists note that even indicating all the statutory points on sociological research is not a confirmation of its authenticity.

"In the part, some faux centers used to publish not very correct information about the research. But now they just copy it. They are studying them too, and there is a great evolution in the activities of these pseudo-centers. At first, there were no explanations about the survey methods ( IMI ), just journalists published it. Then there were the people behind it, then the fake centers. Sometimes they copied, say, margin of errors for another sample size. Then you can still see them as incompetent. And sometimes you can't when the sample is the same. So we still have to see if there is any methodology. Sometimes the site does not show that they are conducting any research, "- Volodymyr Paniotto, Director General of the Kyiv International Institute of Sociology. said at a press conference" Uprising of Black Sociologists".

The media is playing up to the manipulators of opinion polls

Deputy Director of the Institute of Sociology of the National Academy of Sciences of Ukraine Yevhen Holovakha emphasizes the importance of the media in establishing the reliability of sociological research results and disseminating fake ratings. However, the IMI study found that not all media perform its function in this regard.

So, out of 20 online editions 12 punblished storie with signs of ordering which contained ratings of politicians and parties. It is both a matter of disseminating the results of pseudo-polls and of manipulative use of real social research in favor of one or another politician / party.

Here is an example of how utterly different two online editions used the results of the KIIS survey : gordonua.com and obozrevatel.com :

(Gordon.ua: Half of Ukrainians associates corruption and Poroshenko and his party –sociological polls)

In total, IMI experts found 46 stories that have signs of an order during the monotoring. This is 25.8% of all stories that contained party / candidate ratings. 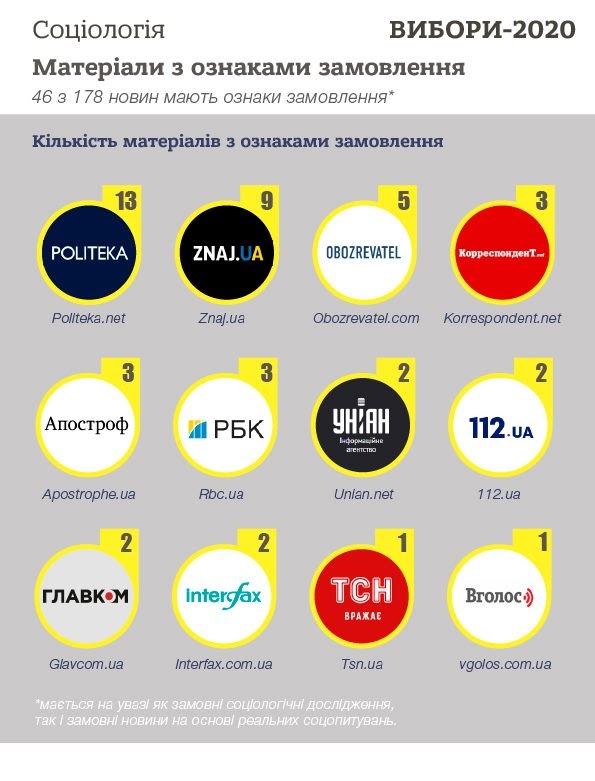 Oleksandr Oksymets, the coordinator of the Pseudo-Sociologists Database project, also draws attention to the leaders of this anti-rating.

There are such sites as "Politeka" and "Znay", they are part of the same holding and are considered information garbage cans. Their pages were even removed by Facebook from its platform. Palchevsky's terrible PR was on these sites for half a year for several times with different headlines. That is, a poll is published on Monday, and they write about it for another two weeks. I have never seen such a thing in the history of the project, " Oksimets said about  such pseudo-polls innovation.

At the press conference, Oksymets cited examples of pseudo-research in favor of Kyiv mayoral candidate Andriy Palchevsky, which were published by Politeka and Znay. During the several months of the election campaign, these "results" were actively disseminated on social networks. However, finally, the Facebook pages that did so were deleted by the administration of the social network. According to the Opora Civic Network, thousands and tens of thousands of dollars were spent to promote ratings featuring fake polls on deleted afterwards Facebook pages.

In mass media, on the other hand, pseudo-sociology is not taken down. So you can still get acquainted with it. Here are some examples:

-"Local parties have high ratings in Prykarpattya region – as sociologists said". The website korrespondent.net published the results of a poll conducted by the Ukrainian Institute for the Study of Public Opinion with an inflated rating of the Ukrainian Galician Party in the elections to the Ivano-Frankivsk Regional Council. In total, this survey scored as much as 103.7%. The same results were published by rbc.ua and glavcom.ua .

"The leaders of the electoral sympathies of Odessa residents have become known ." "Obozrevatel" referenced to the poll of the sociological center "Argument" and called the leader of the mayoral race in Odessa Serhiy Kivalov.

"Fresh ratings of parties, whom Ukrainians are going to vote for" . The survey of the Center for Social Monitoring, interpreted in favor of the OPFL, was published on rbc.ua.

-"Kyiv mayoral election: results of new poll became known ." The site politeka.net informed its readers about its own telephone survey of Kyiv residents. Mykola Tomenko was in second place in the mayoral election with a rate of 8.1%. In another news item, citing a poll by Legal Lead Initiatives, the site called Oleksiy Kucherenko, Batkivshchyna's candidate, as the most dangerous rival for Vitaliy Klitschko.

-"Kernes and Kucher go to the second round of the Kharkiv mayoral election - poll". The data of the sociological survey of the company Content Dynamics with signs of ordering in favor of the candidate from the "Servant of the People" Oleksiy Kucher was  published by the website glavcom.ua.

-"The mayor of Dnipro Filatov cedes ground to the leader" Public force "Krasnov - poll" . This was the news on interfax.com.ua about the social research of the Center for Social Development INTER-ACTION in favor of Krasnov. This news was published on the website tsn.ua .

IMI's study of national media coverage of public opinion polls showed an almost absolute violation of the law. Only 1.7% of the stories with the ratings of candidates and parties contained nine items required by the Law on Local Elections. Most often, such materials do not indicate the customers of opinion polls, a little less often they cited the exact questions asked to respondents. All this is a field for manipulating the minds of readers.

However, this does not mean that the editorial offices deliberately committed violations for selfish purposes. Among these materials, 25.8% have signs of order. This is both the spread of bespoke sociology and real social research in a favorable light for politicians.

Local elections in Ukraine have shown that the administration of the social network "Facebook" has started to fight against the spread of pseudo-ratings. Under conditions of mass spread of fake ratings, the whole pages and accounts are deleted there.

On the other hand, this is not the case with the Ukrainian media. Most of the respondents (12 out of 20) placed ordered stories with ratings. And, therefore, we can talk about pseudo-media, which act together with pseudo-sociologists during election campaigns.

This study was made possible by the support of the American people through the USAID Media Program in Ukraine project, which is run by the international organization Internews Network. The contents are the sole responsibility of the Institute for Mass Information and do not necessarily reflect the views of USAID, the US Government or the Internews Network.