Only 3.6% of regional online media news about JFO - IMI research

Only 3.6% of total news are reports on Joint Forces Operation (JFO) in regional online media newslines. At the same time, most often the regional mass media report on conflict-sensitive population groups, provide information on the line of demarcation and information about the disengagement of troops, and least they write about the situation in the front-line settlements.

These are the results of the survey conducted by NGO "Institute of Mass Information", which was held in 10 regions of Ukraine this November. * 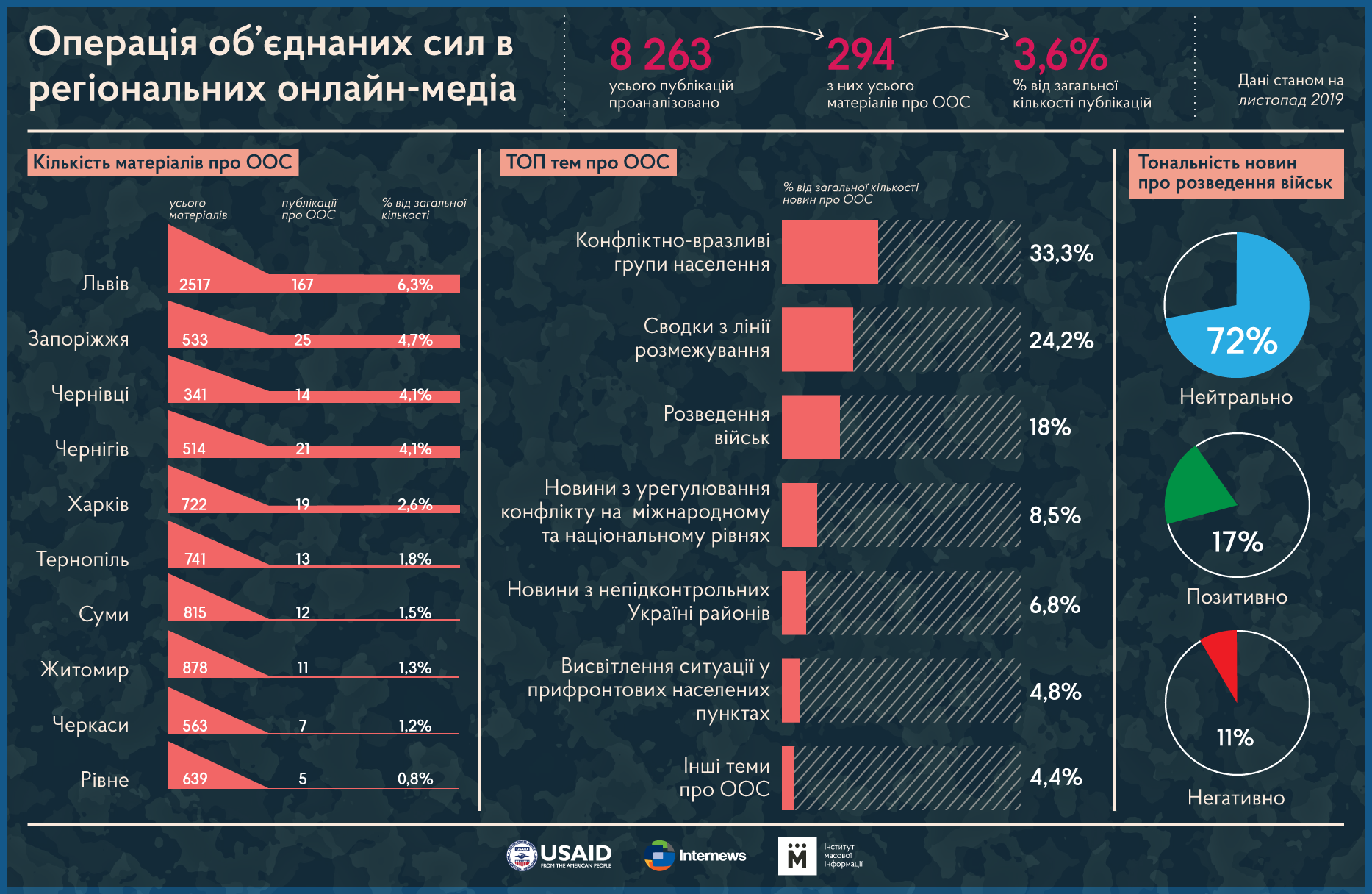 The reports from the delimitation line were covered by every fourth story (or 24.2% of total publications on JFO). This was mostly reported by the online media of Chernihiv (57.2% of the total number of publications about JFO in the region) and Kharkiv (52.6%). Zhytomyr, Rivne, Sumy, Cherkasy and Chernivtsi did not cover this subject in the news.

18% of the materials covered the disengagement of troops. Most of them were published in Kharkiv online media (26.3% of the total number of publications about JFO in the region), Zaporizhzhia (24%) and Lviv (22.7%). There were no news reports about disegagement in Chernihiv, Sumy and Ternopil media.

At the same time, the tone of news coverage of the disengagement of troops on the demarcation line was largely neutral. Thus, out of 53 news on disengagement news 72% were neutral, 17% were positive and 11% were negative.

* Within the survey, 8263 news items were processed from 50 regional online media in 10 cities of Ukraine (Zhytomyr, Zaporizhia, Lviv, Rivne, Sumy, Ternopil, Cherkasy, Kharkiv, Chernivtsi, Chernihiv), which were published in newslines from 4 to 8 November 2019  Only the news from the online-based mass media were subjected by the monitoring: no articles or journalistic investigations, analytics, blogs, author's columns, etc. have been analyzed.

The monitoring methodology covered the analysis of the number and topics about JFO, as well as the number and tone of coverage of news about the disengagement of troops in Donbass region. The topics of the JFO news contained, in particular, the following categories: conflict-vulnerable groups, disengagement from the demarcation line, troops disegagement, news on conflict settlement both internationally and domestically, news from areas outside Ukraine's control, coverage of frontline settlements conditions. A total of 294 JFO news items were analyzed.

Monitoring was held in the following media: