In the run-up to the local elections, the presence of women experts in the Ukrainian media increased by 3% compared to the beginning of the election campaign. As of mid-October, female experts commented on almost every fourth article in mass media (27%, for comparison, in September this figure was 24%). At the same time, 73% of male experts gave comments to mass  media.

At the same time, the number of mentions of women as heroines of stories has decreased - from 35% as of early September to 31% as of mid-October, when the campaign for the local elections was in full swing.

These are the results of the monitoring of twenty most popular national online publications, five printed press editions and eleven national TV channels, conducted by the NGO "Institute of Mass Information" and "Detector Media" in October 2020 at the request of the National Democratic Institute (SRI). *

The results of the research study showed that mentions of heroines in online stories are less frequent than mentions of men heroes. On average, this figure is 29% of female heroines against 71% of male heroes.

Most mentions of women-heroines were in the stories speaking of show business (32%), criminal chronicles (21%), in international news (14%) and politics (6%). 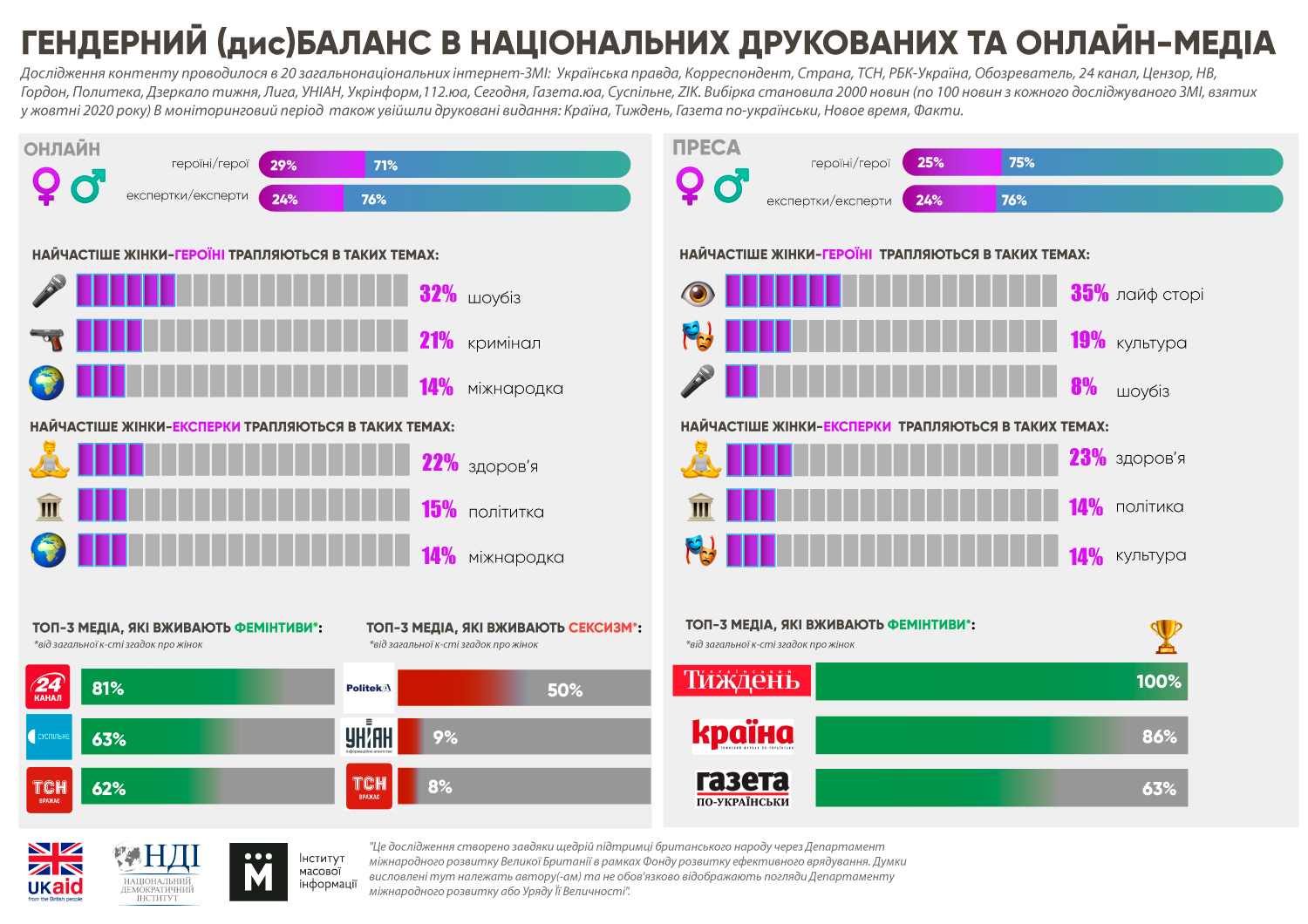 “In the run-up to the 2020 local elections, the percentage of female experts in politics and mentions of Ukrainian female politicians has increased to some extent, compared to the results of previous monitoring. At the same time, some Ukraine "tabloid" newsrooms continued to fill in the newslines with degrading women and sexist content. Due to toxic messages / headlines, the employees of these editorial offices make money on clicks and discriminate women and girls, ” IMI analyst Yana Mashkova commented on.

The IMI experts noted that during the monitoring period, 8 out of 20 media outlets published at least one story with signs of discrimination or sexist tokens. Employees of the tabloid sites resorted to detailed descriptions of the female body, emphasizing in the headlines about the neckline, lingerie, lexically abused the natural features of the body and resorted to ageism.

As for feminine gender-specific job titles, they are employed in all Ukrainian mass media, but the highest index of feminine suffixes was recorded: "Kanal 24" (81%), "Suspilne" Public broadcaster (63%) and "TSN" (62%) of the total number of content mentioning women. Experts also noted that media that have a low index of femininitive suffixes employed it only in a negative context with emotionally focused attention, while the neutral news had no feminine gender-specific job titles. 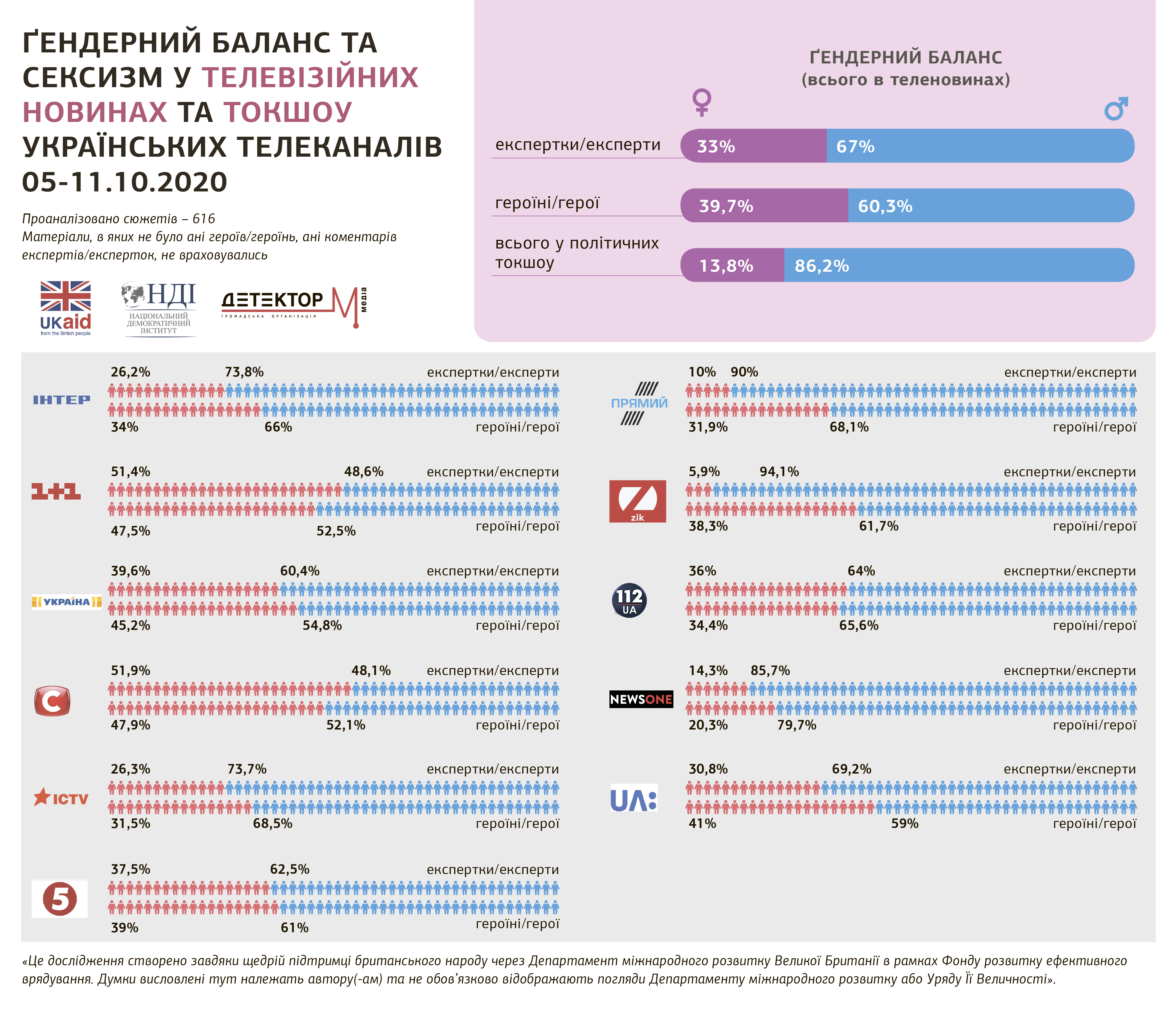 In the news of TV channels that aired from 5 to 11 October, there were 39.7% of heroines and 60.3% of heroes. Most often, female heroines appeared in the news stories of STB, "1 + 1" and "Ukraina" channels, and least often in NewsOne news.

The percent of women in the talk shows of the national TV channels is smaller than in the news editions: only 13.8% against 86.2%.

Men in talk shows often dared sexist and discriminatory statements. For example, a guest of the "Ukrainian format" on NewsOne Yevhen Chervonenko gave a sexist lecture on "poseessing a wife" on the air : " Your own wife does not owe you either. Because other people brought her up before you. She had a different last name. And for her to owe you, you must give her what a normal man gives a woman. Who does not pay separately, inviting her to a restaurant, does not require to pay separately. This is our Slavic, any culture. And the power of a man. Then maybe she owes you on her conscience, otherwise no one owes anything to anyone. "

In the news of the national TV channels, women were often the heroines of stories covering the social issues. They often appeared in the news as victims of violence, accidents, natural disasters, relatives of perished persons. They are portrayed in their traditional roles - as teachers, mothers of schoolchildren, saleswomen, pensioners, volunteers, cultural workers, medical workers, etc. In materials about politics, economics, war, women are mentioned less often.

Most of the news services of the national TV channels mostly use feminine gender-specific job titles. However, sometimes the heroines of the stories stood against it. In the article "Facts of the Week" on the ICTV channel, the military Olga asked: " Just don’t write" Sergeantesse" . And she explained that she was against feminitive suffixes, because there were no statute like "female grenade launchers" or "female machine gunners": " I am against women in war. I am categorically against combat positions. " The author of the story clarified that in fact the heroine spoke not against women in the army, but against feigned helplessness, and then quoted: "If a woman goes to a military position, she must be aware of the full responsibility of this position. There is no such thing as carrying a machine gun for her, doing something for her. We are going to NATO. Try to take her portmanteau for an American woman and bring it - it will be regarded as disrespect. " The author says that the heroine has a " strict, tough character ", which the heroine herself denied. In addition, the military was asked if she felt sorry for its enemies.

"1 + 1" reported that girls were enrolled in the eighth grade of the Bohun Kyiv Military Lyceum for the first time. Journalists talkув about it like about something extraordinary, that one of the girls was put in command of the boys, and they were surprised that the girl's cabin was no different from the boy's: " neither soft toys nor jewelry ."

In the article about corruption of judges, "1 + 1" focused on women judges. Speaking of Judge Mariya Zelinska, the accent was placed on her elite cosmetics, expensive designer clothes, and exquisite watches. " After difficult meetings, she was de-stressing at beauty contests. Mariya Zelinska became the first judge to appear on the podium of Mrs. International Ukraine, ”the story read. Another judge, Victoria Kytsiuk, was called a rebel. Journalists summarized: “ According to the court administration, more than half of the more than 5,000 judges are women. However, the representatives of Themis do not consider themselves more successful in this field than men.” The story was entirely based on the quotations of the heroines-judges and evaluative judgements the authors made, which do not concerned equal opportunities for women and men in the judiciary or other problematic issues.

Women experts in the news of national TV channels accounted for 33% against 67% of men. The highest percentage of female experts was on STB and "1 + 1", the lowest one was on Pryamyy Channel and ZIK.

Women experts were often invited to comment on social issues. Comments were given by representatives of government agencies, employees of press services, law enforcement agencies, NGOs, psychologists, nutritionists and so on. Women commented on political and economic issues much less often than men did.

Every fourth article in the printed press was commented by female experts - 25%.  For example, in September 2020 , this figure was 28%. Most often, female experts comment on the issues of health 23%, politics, international issues and culture (14% each).

At the same time, the presence of the heroines of publications decreased. During the monitoring period, female heroines occured in 24% of printed stories. In September, this figure was 36%.

During the monitoring period, the largest gender balance was observed in "Gazeta po-Ukrainsky" :45% of heroines against 55% of heroes.

During the monitoring period, no women discriminatory or sexist texts were recorded in the printed press.