Ukrainian mass media cited women as experts in only 24% of content items. However, men were cited as experts three times more often - in 76% of stories.

Articles covering political and economic issues barely mentioned women, or in the stories about hostilities in Donetsk and Luhansk regions. Most frequently, women became central figures at the stories and reports dealing with society issues, they appeared in TV news as victims of accidents and violence, were portrayed in their traditional roles, as volunteers, teachers, mothers of schoolchildren, saleswomen, retirees, health workers and cultural workers, as well as sexual objects or representatives of show business.

These are the findings of the monitoring in twenty most popular national online editions, five printed press editions and eleven national TV channels, conducted by the public organizations "Institute of Mass Information" and " Detector Media " in September 2020 at the request of the National Democratic Institute (NDI) *.

According to the research study, women are three times less likely appearing than men as characters in online editions’ stories. This figure averages 28% of female characters against 72% of male characters. 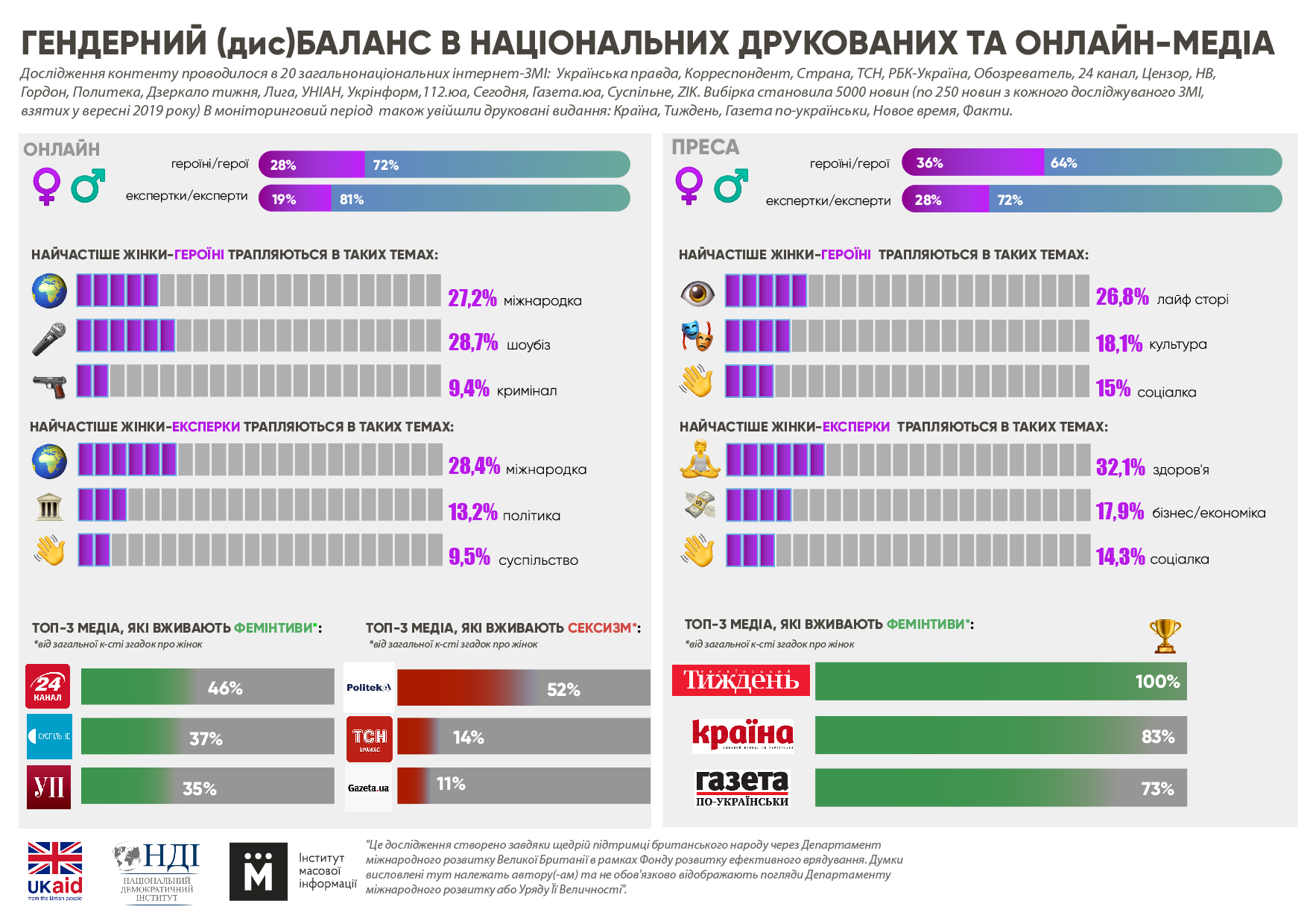 "In some yellow media, the indice of gender balance of female characters against male characters may seem more or less balanced. However, if you examine each story in such media in details, you can see that these media are full of harmful sexist, degrading phrases, vocabulary and headlines about women. Some media still suffer from sexism and discrimination, so it is not worth talking about the gender balance on such resources  ”, as IMI expert Yana Mashkova said.

The most frequent mentions of heroines in the online media were in stories covering show business (28.7%), international news (27.2%) and criminal chronicle (9.4%).

As for the female experts, their comments can be found only in every fifth story: on average, it is 19% of women experts against 81% of men experts.

In the space of this monitoring period, they mentioned the following experts the most often: German Chancellor Angela Merkel, Belarusian opposition leader Svitlana Tikhanovska, Ukrainian MPs from the "Servant of the People" Yevhenia Kravchuk, Lyudmyla Buymyster, MP from the "European Solidarity" MP Iryna Herashchenko, and there were some single mentions of women MPs from "Holos” (Voice) and "Batkivshchyna” (Fatherland): Inna Sovsun and Alyona Shkrum.

IMI experts noted that during the monitoring period, 9 out of 20 media outlets came out with at least one article which had signs of discrimination or derogatory sexist messages / lexical units about women. Most often, the journalists employed a coarse language to describe a female body (objectification) and resorted to ageism.

As for the index of feminine gender-specific job titles, all online media in the monitoring survey employed them. However, one should pay attention to the frequency of its usage. Most frequently, feminitive suffixes are used by following media: The 24th Channel : 46% of the total number of materials where women were mentioned, "Public broadcaster": 37% and "Ukrayinska Pravda” (Ukrainian Truth): 35%.

Among the people mentioned in the content items of national TV channels as heroes and heroines, there are women on average 42%, and men : 58%.

These are the results of the monitoring of national TV channels conducted by “Detektor Media”  from September 7 to 13 inclusive **.

Most often women as character of news stories are present on STB, 1 + 1 and "Ukraina", and the least they are on ICTV and NewsOne. 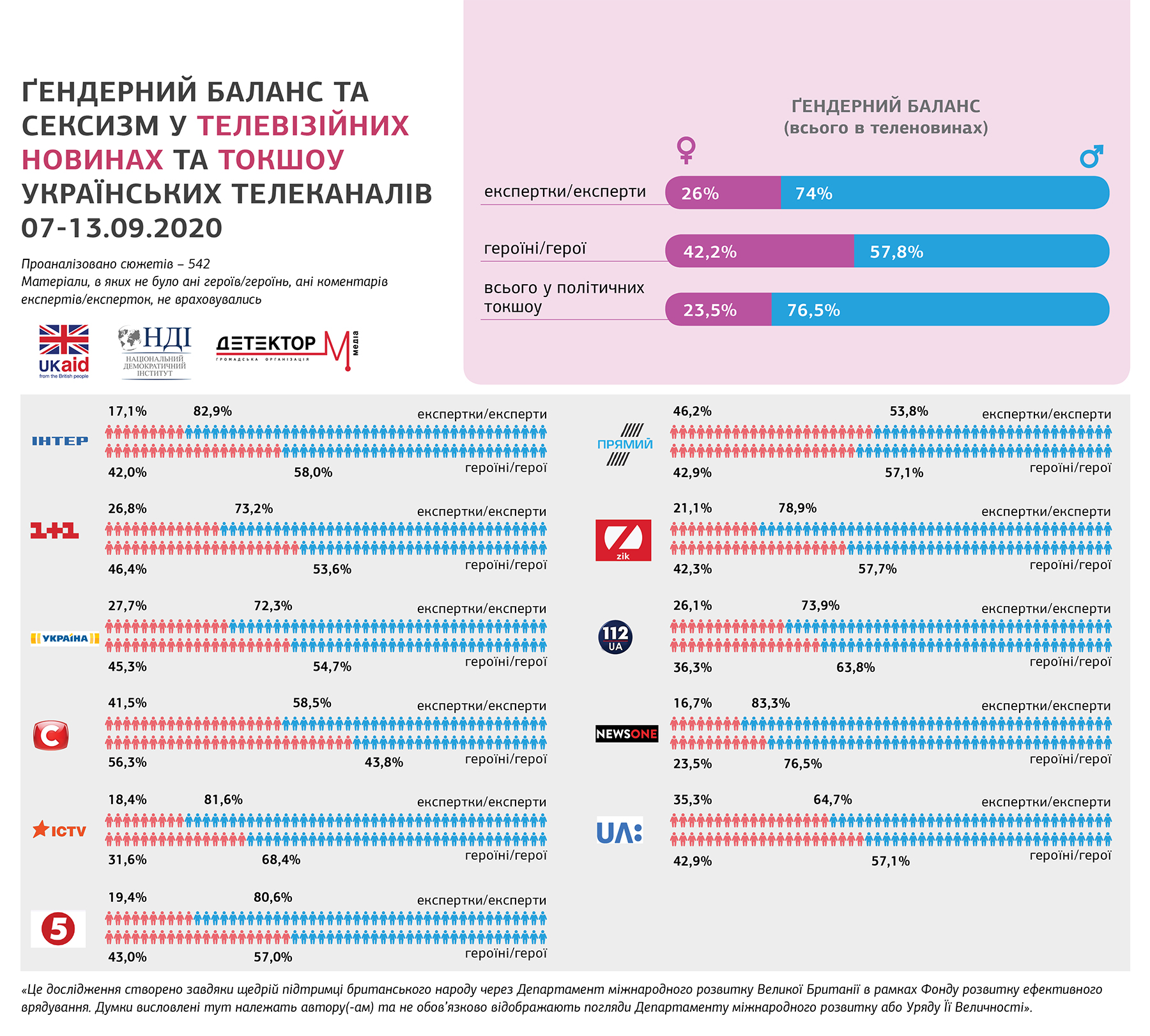 23.5% of women and 76.5% of men take part in the political talk shows of the national TV channels (here the division into heroes and experts does not apply, as it is difficult to determine the specific function of the participant of the talk show). It was in the talk show that obvious cases of sexism and prejudice against women were recorded.

For example, one of the guests of the "Ukrainian format" on NewsOne on September 9, politician Mykhaylo Dobkin, speaking about MP Halyna Yanchenko from "Servants of the People", made incorrect statements: "Yanchenko, you’ve got to see yourself: it would do no harm to wash your head more often. You could, please, make a remark to me." The hosts did not react to this phrase. Monitoring studies by “Detector Media” show that this case is typical for talk shows on TV channels belonging to the Medvedchuk group (112, ZIK and NewsOne).

Kyiv mayoral candidate and female MP Iryna Vereshchuk saw sexism in the words of journalist Ihor Lesyev in the program "The People vs. together with Natasha Vlashchenko" on the “Ukraina 24” channel, including his irony about the slogan "The new mayor will be a woman." Instead, in the program "Right to Power" on September 10 on the "1 + 1" channel, MP Iryna Herashchenko asked Iryna Vereshchuk about her attitude to "crass sexism" in the ranks of "Servants of the People".

Women-heroines almost do not appear in content items covering political and economic topics, in the stories about hostilities in Donetsk and Luhansk regions. Most often, women are the heroines of social stories, get on TV news as victims of accidents and violence, are portrayed in their traditional roles - as volunteers, teachers, mothers of schoolchildren, saleswomen, retirees, healthcare employees and cultural sphere experts.

Due to attention to the events in Belarus, where women's marches are part of the protest rallies, the presence of women in international news has increased to some extent. In particular, the floor is given to female protesters and female activists.

26% of women experts in news and talk shows are against 74% of men experts. The highest percentage of female experts was recorded on Pryamyy, STB and "UA: First". Much less it was done on ICTV, Inter and NewsOne.

Women experts most often appeared in the stories covering issues of society. Comments were given by representatives of state authorities, heads of social services, press services, law enforcement agencies, and representatives of public organizations. Most male experts are in the news covering political and economic topics.

No examples of sexism were found in the news of national TV channels during the monitoring period. On September 1, 1 + 1, a story about feminine gender-specific job titles was published , in which passers-by were asked about their attitude to these words. The illiterate versions of "lawyer girl" (from "lawyer"), "electricianess" (from "electrician") and "ambassadoresse" (from "ambassador") were heard from passers-by in the street. However, in the story, an expert from the Institute of the Ukrainian Language stressed that by and by, feminitive suffixes would cease to amaze speakers.

In printed press, in every third article, a woman appears in the role of the heroine : 36%. At the same time, men are twice as more frequent as heroes in mass media : 64%. The following printed publications adhere to the gender balance: “Gazeta po-Ukrainski”: 54% of women and “Fakty”: 50%. The lowest number of female characters was recorded in the magazine "Novoe Vremya" : 22%.

Most often, women in the printed press commented on the issues of health, business and social problems.

No sexist or discriminatory texts were recorded during the monitoring period.

The leader with the highest rate of feminine gender-specific job titles is the magazine "Tyzhden” (Week) (100%), in all its articles, which mentioned women, femininitive suffixes were used. The least femininities are used in the publication "Fakty" (30% of the total number of mentions of women).