Many buttocks, little of journalism. How does Ukrainian show biz hyped oneself in mass media

Ukrainian show biz is a victim of stereotypes. The celebrities, who could shine with their diversity, are confined to some lame images the mass media are producing. And mostly, they are used to seek the limelight with their personal lives or on their denuded bodies.  This is the conclusion of a monitoring study held by the Institute of Mass Information, which analyzed what and how the most popular Ukrainian online media covering show business *.

All news mentioning celebrities (famous athletes, actors, singers and other representatives of show business) were selected for the monitoring. The sample included news items about the professional activities of show business stars, as well as the news about their personal lives.

-The gender balance was calculated from the total number of news items.

-Materials with signs of sexism (ie bias or discrimination against people based on their sex or gender) are assessed separately.

From the very beginning, the results of the IMI study showed a strange mismatch: 75% of materials about show biz and stars was about women, while men accounted for only 10% (and another 15% was star couples). It would seem that show business is dominated by matriarchy.

But in reality this is not the case.

Almost half of the show biz news items (namely as much as 43%) are stories about the naked bodies of women. For example, the news saying about "voluptuous breasts she cast out", "attracted men with her spicey low dress", "showed off her seductive figure" and so on. For 101 news items with naked and half-naked women, there were only two news items where men's torsos were exposed (besides, it was about courage and creativity). This indicates that show business not only does not evaluate its impact on the audience, but does not even realize for what target audience its content is produced.

Another 35% of show business news items were speaking of personal life. Mostly these were news about treatment or that someone was injured, the others were abed having contracted COVID. Here we included information that someone had divorced or got engaged, or other news about other family events. Some of the news about personal life concerned the illness of public figures, pregnancy, the birth of children or the celebration of holidays:

Sergey Babkin had head trauma: the artist showed a photo from the hospital ("Obozrevatel")

Reese Witherspoon showed a rare photo with her son (Channel 24).

Only 18% of the total number of news about show business were somehow related to the actual work of show business stars. Anyhow, we had to include to it, for example, the participation of stars in various shows as judges or Poplavsky's jeansa about the opening of his cafe. There were some few news about the Oscar ceremony with a review of the nominees.

To sum up, show business in Ukrainian mass media does looks something like this: naked singer H. swam in the pool, then topless peeled an orange, broke her leg, and her husband got vaccinated without her. Singer H. told about all this on a TV show. Because it seems that only three options are available for domestic stars: get off one’s clothes, talk about something personal and take part in a TV show.

The study sample did not include news about public or charitable activities of Ukrainian show business stars.

Whom did they speak about?

Ukrainian journalists in tabloid news preferred domestic celebrities. More than half of the news (58%) of show biz concerned the ours. Russian show business accounted for only 10% of such news, and another 32% spoke of other foreign stars.

Among Ukrainian celebrities, Nastya Kamenskykh, Lesya Nikitiuk, Tina Karol and Alyona Alyona are the most mentioned ones. Mostly such materials are based on posts from social networks. Example:

Depressed Nastya Kamenskykh spokefrom Mexico about her personal tragedy: I ​​wanted to share it… ("Politeka")

Some of these news were supplemented by comments from the posts:

(“Pussy not shaved”, How much to take photos of one’s doodle-sack”? Kamenskykh flashed her body”

But they tried to boost interest to her with some rumors about her personal life.

Alyona Alyona replicated the looks of her famous colleagues.

As to foreign celebrities, the mass media in Ukraine like to write more about women than men. Jennifer Lopez, Angelina Jolie and Kim Kardashian were mentioned the most. And the latter, Ukrainian online editions have already depersonalized and turned into a symbol of all women "with seductive forms":

According to IMI experts, one of the highest degrees of depreciating women is to call them not by their own names, but to say she is split and image of some world-famous celebrity, as, for example, they did in the above-mentioned news.

News about foreign stars were made mainly with reference to foreign tabloids:

According to IMI experts, Ukrainian show biz stars are much more willing than foreigners to hype themselves with naked bodies. It is likely that this type of PR is quite acceptable to them and they do not see any negative effects. And they hardly reflect upon the values ​​they are transmitting to the audience. In fact, show business stars are often examples to follow. Thus, anthropologist Jamie Tehrani found that " Fame is a powerful cultural magnet. As a hyper-social species, we acquire the bulk of our knowledge, ideas and skills by copying from others, rather than through individual trial-and-error. However, we pay far more attention to the habits and behaviours demonstrated by famous people than those demonstrated by ordinary members of our community”. Such behavior of famous people can make teenage girls to imitate them, and this, in turn, can threaten children to become victims of pedophiles.

Research has shown that in show business news, a woman is portrayed primarily as a sexual object. Almost half of the material on show business contains objectification, where a woman is seen not as a person, but as a designer of a certain set of body parts.

The most beautiful woman in the world Hadid in panties allowed to admire the curves: Angel, you shine… ("Politeka")

This news vehiculates that a woman's main value is to be sexually attractive to a man and to have a perfect body. For example, news items such as Sofia Stuzhuk showed breast size 4 after surgery - video, can encourage women to consult plastic surgeons and to suffer from complexes because of their own appearance.

For comparison: in the news about men of show business, the media mostly write about their professional achievements:

- whether the extraordinary events that happened to them:

Serhiy Babkin was injured and fainted in the forest: what happened (Channel 24)

Such a distorted image of articles reinforces gender stereotypes in society. As the media shape norms and assert stereotypes, the spread of sexism through mass media and social networks directly affects society. Sexism is dangerous to society because it can lead, for example, to violence against women.

Most of the show biz news in the sample was written in violation of professional journalistic standards. For example, in violation of the standard of separating facts from comments, such news contained unassuming evaluative judgments and emotional epithets (for example, “spicey ccurves”, “seductive curves”, “tempting appearance”):

Mila Kuznetsova, a Ukrainian with a size of 15, unbuttoned her blouse, casting them out in the middle of the street: What's next? ("Poleka")

Ex-Nikita Anastasia Kumeiko wearing no pants lured with an tempting look in inside pictures: she is a woman ("Politeka")

Although adding emotional epithets is the journalist's responsibility, the characters themselves are responsible for the content of the information. Experts have identified two main sources of information about show business, which is social networks of public figures and press releases that they send. Accordingly, the media often broadcast the form of presentation offered to them by the stars themselves and their PR staff. It also indicates that few people can still write professionally about show business in the top Ukrainian media.

Katy Perry admitted that she stopped shaving her legs ("Obozrevatel")

The most show business content came out on “Politeka” website: this resource accounted for 28% of all tabloid news recorded during the monitoring period.

The site abused with manipulative headlines. Almost all content related to show business on the site "Politeka" had sexisms and objectification of women.

Playful Lesya Nikitiuk jumped on the pool table, conquering with her forms in a mini: What a man can …

What epithets the authors of such texts give describing female forms. These are "sweet melons", "peaches", and "hills".

Russian Kardashian dazzled by the record size of her wet "melons": "Queen of Temptation"

Such content has no informational value and only multiplies the depreciation of women.

In second place in the number of news about the stars is the site of TSN, which accounted for 15.5% of all news in the sample.

The editors of this resource also abuse women's objectification and manipulative headlines that contain evaluative judgments:

Slava Kaminska in a bright swimsuit impressed with a slender figure

The sites "Channel 24" and "Obozrevatel" accounted for 15% of the show business news that were included in the sample.

As for the materials of Channel 24, although the editorial office employs some emotional epithets to the headlines, the news is quite decent and the photos of naked women are much fewer compared to other sites. This site mainly tries to avoid sexism and humiliation of women:

Nicole Kidman won the image at the SAG Awards 2021

Instead, the Obozrevatel website features both women's objectification, photos of naked women, and manipulative headlines and emotional epithets in the news items. 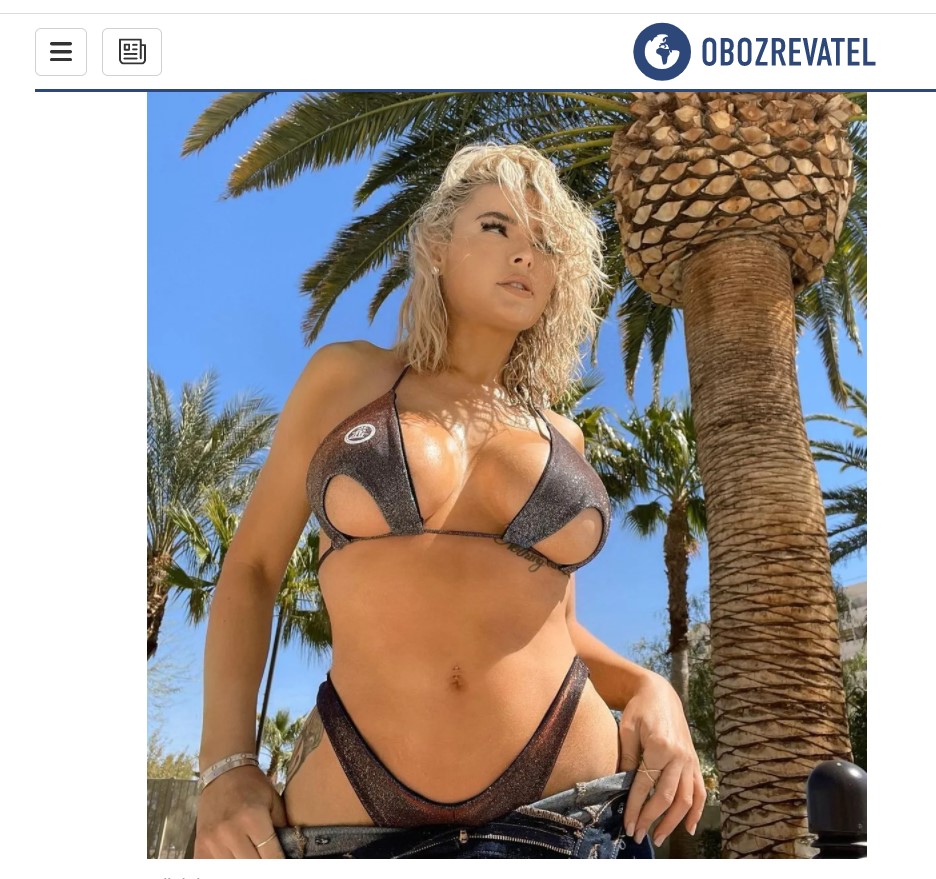 Such content is also undesirable for children. However, the Obozrevatel website does not have the appropriate tags.

Media researchers identify the entertainment function as one of the key functions of the media. For example, researcher C. Wright in his work "Mass Communication. A Sociological Perspective" calls entertainment one of the main functions of the media. According to the “Detektor Media” study , entertainment content occupies a leading place in the structure of media consumption. Many citizens need online entertainment content, especially young and middle-aged people. At the same time, three questions arise: what values ​​does such content transmit, what audience is it aimed at and can it be done professionally, in accordance with journalistic standards.

It seems that neither the those ones who produce such content, nor the media that publish it have thought about these issues yet.

IMI experts have prepared basic recommendations for the preparation of materials on show business.

What to do if sexism, stereotypes and devaluation of women in the media are annoying

The Commission on Journalism Ethics is a body of self-regulation of the work of journalists and editorial offices, which allows discussing and proposing ways to resolve conflict situations, based on the Code of Ethics of Ukrainian Journalists.

Mediachek is an initiative organized by IMI and “Detector Media”. The complaint can be filled in online. The review will be conducted on violations of the law, as well as basic professional standards of journalism and journalistic ethics.

This study was made possible by the support of the American people through the USAID Media Program in Ukraine project, implemented by the international organization Internews Network. The contents are the sole responsibility of the Institute of Mass Information and do not necessarily reflect the views of USAID, the US Government or the Internews Network.