The election campaign for mayor of Kyiv has not officially started yet, but the campaign ad of  future candidates have already appeared in the capital. They also promote one’s posts on social networks.

But in the web-based media the running candidates are extremely rare. Among more than a dozen people who run for mayoral position, only Vitaliy Klitschko is regularly appearing in news of online editions.

Only the chief sanitary doctor Viktor Lyashko can compete with the Mayor of Kyiv in terms of the frequency of mentions in the online media. He is called a potential candidate from the mayoral party "Servant of the People". So far, Klitschko and Lyashko are competing almost equally by number of news items on coronavirus and lockdown measures.

Such are the main conclusions the Institute of Mass Information had based on the monitoring  which covered 10 online media: Dzerkalo Tyzhdnya, RBC-Ukraina, Strana, Newsone.ua, UNIAN, Pryamyy, Gordon, Obozrevatel, Segodnya, Kyiv Vlast. We monitored all the news items published on these websites on June 8-14.

Klitschko vs Lyashko. Under the influence of quarantine

Vitaliy Klitschko and Viktor Lyashko were the persons who among all potential candidates running for mayor position in Kyiv appeared most often on news sites during the monitoring period. Thus, the mayor of the capital was mentioned in 85 reports, and the chief sanitary doctor was in 69.

The vast majority of these news items concerned the spread of coronavirus and lockdown. Klitschko figured in 66 of the news of the kind (or 79% of all news mentioning him), Lyashko did 59 news items (86% respectively).

However, the frequency of mentions of both varies dramatically depending on the media.

Thus, during the monitoring week, Obozrevatel and Segodnya issued 14 and 13 news with Lyashko, while Kyivvlast did only one. Instead, Klitschko most often appeared in the UNIAN news feed : 16 times, and only one news spoke of the Mayor of Kyiv on the website of Pryamyy TV channel. 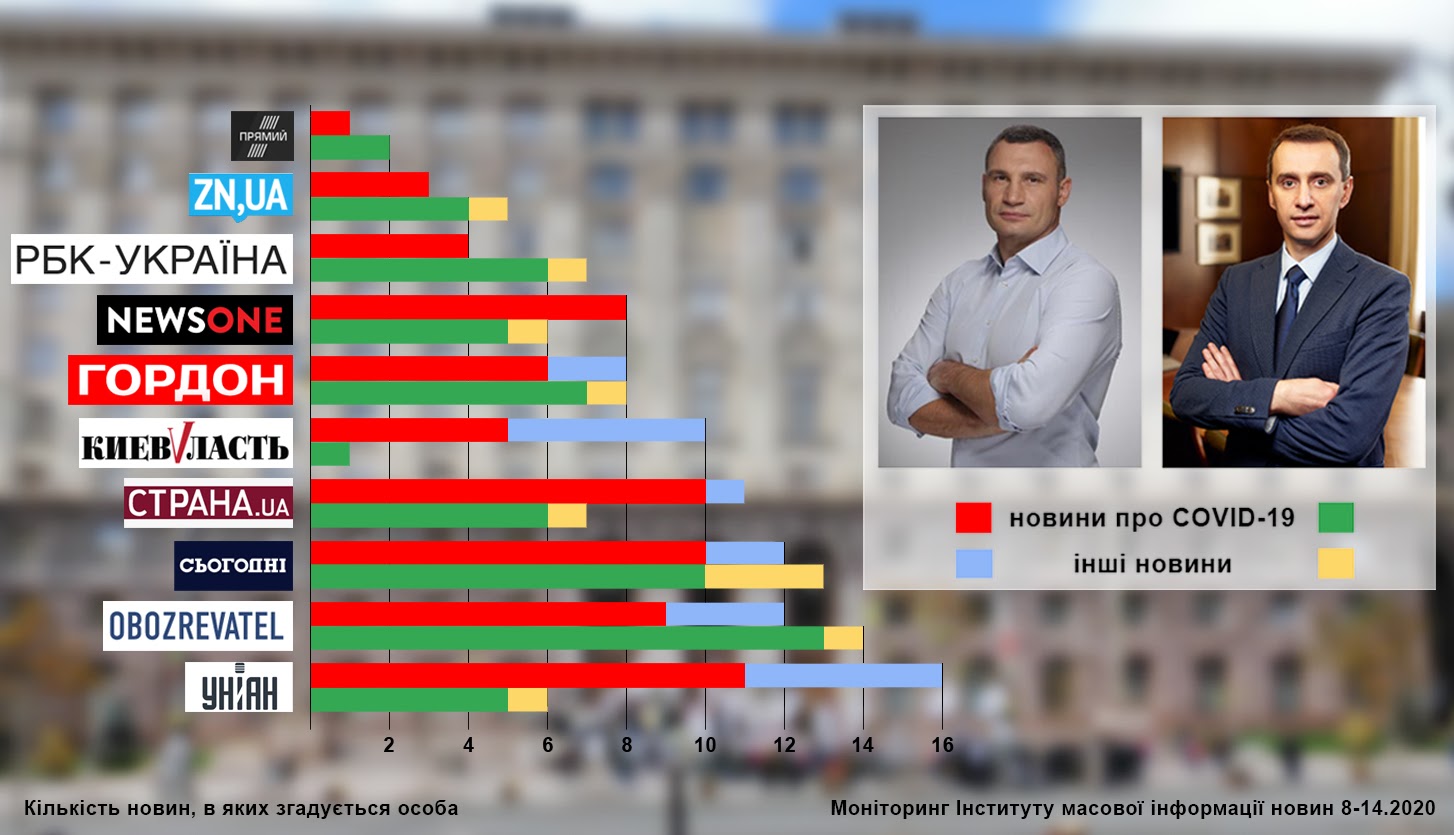 During the week, IMI recorded nine negative news covering the potential candidate Lyashko. All of them mentioned the lockdown violation he made together with Volodymyr Zelensky in Khmelnytsky. Recenttly, it became known that the police had drawn up a report on an administrative violation, which entailed fine of at least 17,000 hryvnias (around $636). Only two online media failed to publish such a news: KyivVlast and Pryamyy.

Vitali Klitschko was also spotted as lockdown defier this week. On June 8, the Gordon website reported that the mayor came to “Avalon” restaurant and greeted happy birthday to some girl (the corresponding video circulated on social networks on June 6). And on June 14, the KyivVlast and UNIAN reported about the violation of quarantine by Klitschko in one of the restaurants on Vozdvyzhenka district. Other sites did not report that the mayor of Kyiv had broke lockdown restrictions during the surveyed period.

In total, four negative news about Klitschko were recorded during the week. In addition to those ones above mentioned, another news was published by Gordon website. On June 10, the site issued news based on Geo Leros' interview with the Censor.net, in which the MP from “Servant of the People” supposed that the head of the Office of President Andriy Yermak had pre-arranged with the Kyiv leaders: to nominate a weak candidate in order to drop him to the benefit of Klitschko.

In addition to news about the coronavirus and the fine for "coffee break", Lyashko got into only one news item of Segodnya website, announcing his participation in the program of the “Ukraine 24” TV channel.

Klitschko had 14 non-quarantine or non-negative news:

UNIAN, Obozrevatel and Segodnya reported on the meeting of brothers Vitaly and Volodymyr Klichko;

Strana, UNIAN, Segodnya and KyivVlast spoke of abolition of free travel on Kyiv public transport for unregistered in the capital benefit holders;

Obozrevatel and UNIAN (this one twice) spoke of dismantling of a support of shopping center which was placed on the carriageway;

Obozrevatel reported on Klitschko's statement on the renovation of the bridge in Borshchahivka.

All others who are going to run for the mayor of Kyiv were still losing a lot in citations and mentions in mass media.

The survey revealed 11 people who have either already expressed their desire to run for the elections in Kyiv, or were named among potential candidates and were included in opinion polls .

For all these individuals, IMI counted only 47 news items during the week of the monitoring. The MPs from “Servant of the People” Mykola Tyshchenko (13 news), Oleksandr Dubinsky (eight news), and Iryna Vereshchuk (eight news) were in the top three. During the monitoring week, the first two were appointed to head the party's branches, so this was the main news they were mentioned in (Tyshchenko had eight sites reporting this news, and Dubinsky had six). As for Vereshchuk, four sites published news about her announcement of participation in the primaries of "Servants of the People".

Another MP "Servants of the People" Oleksander Kachura got into three news on different sites. RBC-Ukraine published his forecast that the government would remain without an road map, Strana spoke of the work of journalists in the Verkhovna Rada, and Segodnya reported on a surprise for Vakarchuk.

Showman Serhiy Prytula got into the news of the Obozrevatel website with a comment on Vakarchuk's resignation.

The MP from "European Solidarity" got into the news of three sites (UNIAN , Gordon and Segodnya) with information about another MP suffering from coronavirus. Three news items on Goncharenko on the website of the Pryamiy TV channel had criticism of the authorities - the President and the Prosecutor General .

Newsone TV channel’s website announced the participation of potential election contenders Yuriy Levchenko and Andriy Palchevsky in its programs. The Segodnya website published the news based on the statement of former Kyiv mayor Oleksandr Omelchenko about his participation in the elections. A possible candidate from Batkivshchyna, Vitaliy Nestor, got into the news on the Gordon website with his criticism of the MP Mykola Tyshchenko. The site also quoted its owner, Dmytro Gordon, on Ukraine 24 TV, where he asked Zelensky about the work of customs.

And none of the news about 11 candidates spoke of the problems Kyiv and its residents had. 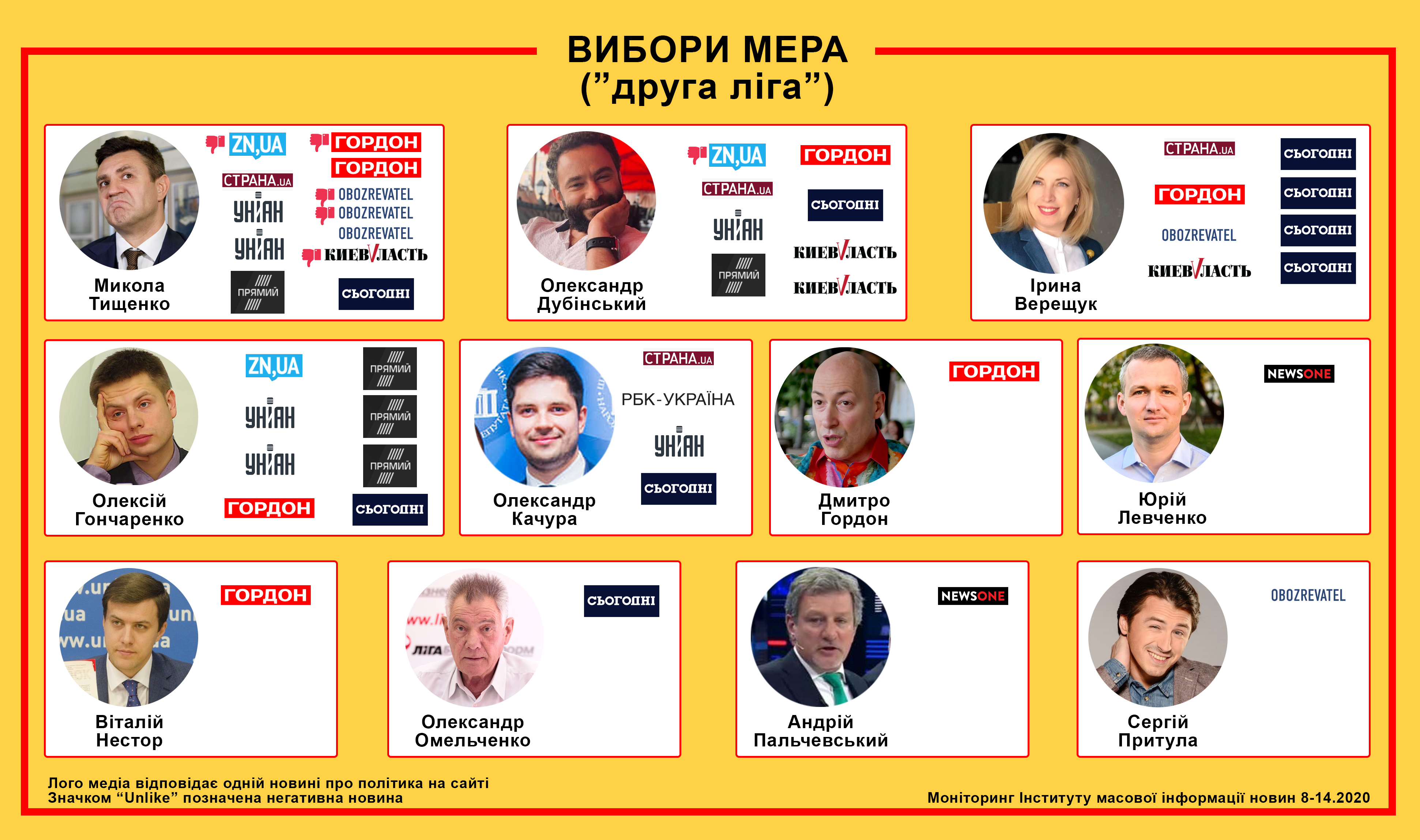 All politicians of the "second league" accounted for only six negative news over the whole week. Tyshchenko appeared in five negative news items, Dubinsky did in one.

Also with a negative accent, Dzerkalo Tyzhdnya told that Mykola Tishchenko took command of the party branch of "Servant of the People" in Kyiv. "Chernovetsky's team is coming back to Kyiv," the news read.

Gordon also mentioned Tyshchenko's relationship with Chernovetsky's people. The respective news quoted the MP from "Servants of the people" Geo Leros on the Censor.net site. The Obozrevatel also issued the same news based on the same interview that quoted Leros' words about Tyshchenko's 80 percent anti-rating score.

The same Obozrevatel, as well as KyivVlast published the news, based on Facebook post of ex-MP from "Svoboda" Igor Miroshnichenko who suspected Tyshchenko of stealing the sand.

During the monitoring, IMI did not identify stories with signs of being ordered and did not divide the news into positive and neutral for politicians. It should be understood that in the election run-up period, any mention of politician (other than negative) plays in his favor. So, the headquarters of potential candidates can order stories to the editorial offices in which it is not possible to recognize the signs of order. In particular, those related to quarantine.

On the other hand, in order to achieve some political goals, the media owners can instruct newsrooms to ignore a potential candidate and not to mention him in any news item. Even if it is related to the performance of his immediate duties or the dissemination of some important information about coronavirus and lockdown.

Thus, conclusions about the political preferences of the owners or about cooperation of the editorial boards with some politicians on a commercial basis can be made on the basis of comparisons of the mass media, how differently they cover the same politicians or topics. This is especially true for coverage or silencing of some negative facts involving the candidates.

Relevant conclusions can be made by the readers, on the basis of this study. IMI will abstain from voicing its own judgments, with purpose to protect oneself from eventual lawsuits the politicians would file against us.