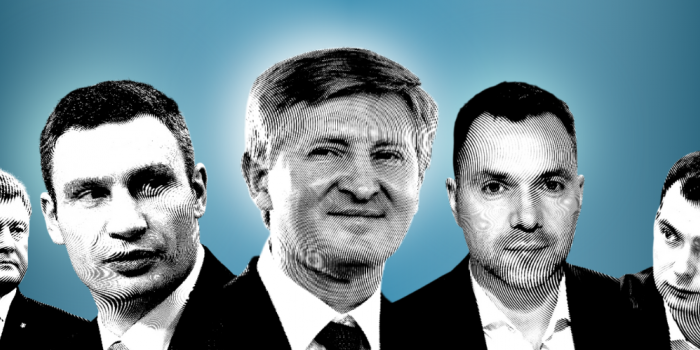 Russia's February 2022 invasion caused a very sharp drop in commissioned content in the Ukrainian media. Enormous safety risks, territories being conquered, attacks on infrastructure have had a negative impact on companies, as they were no longer sure about development strategies and markets. In the media, political topics were suddenly out, and politicians themselves have reformatted their activities. The media focused on conveying socially significant information about the war, security, and survival.

IMI monitoring for September 2022 showed that the jeansa market in the media is on the rise again. As of today, the jeansa content makes up about a third, or half, in some media, of the pre-war amounts. Commercial content with signs of commission is gradually growing in numbers. However, one of the negative consequences of the war was a decrease in the transparency of hidden advertising labeling.

These are the results of the research conducted by the NGO "Institute of Mass Information" across 19 online media, covering the period of September 20–21, 2022. The full content sample included over 7 thousand news items*.

According to the research data, commercial companies are currently the main contractors when it comes to content with signes of jeansa: they accounted for 49% of all such content.

Akhmetov and his companies rank second, accounting for 16.3% of content with signs of being commissioned. Despite Akhmetov's media resources officially leaving the market, he is still actively engaged in PR in the media space, although significantly less so than a year ago. We remind you that in the fourth quarter of 2021, Akhmetov and his resources were the main contractors for content with signs of jeansa. In third place in terms of quantities is questionably balanced content featuring advisers to state structures, namely Oleksiy Arestovych. 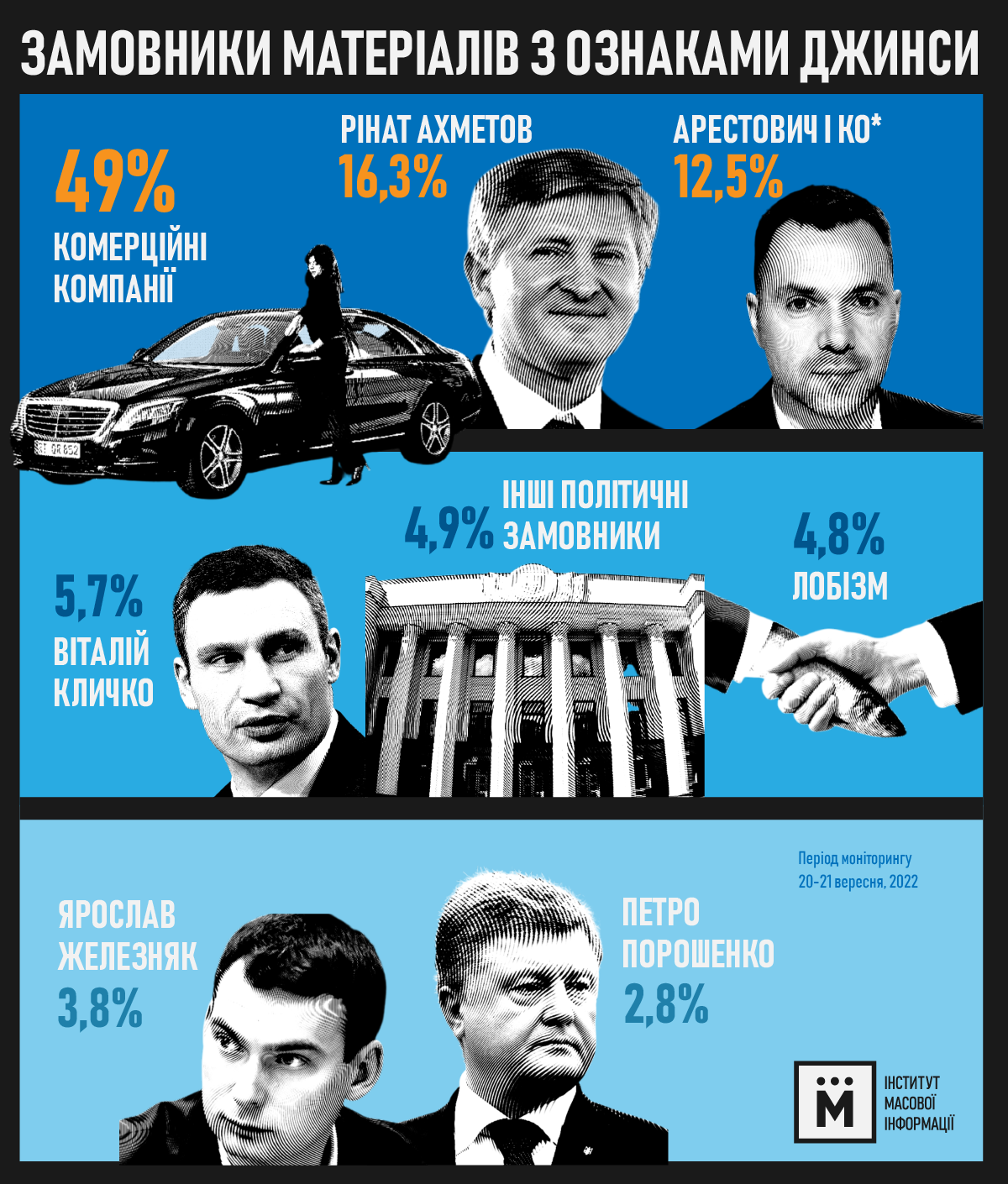 Among all the websites, the largest number of content with insufficient labeling was found on the UNIAN and Channel 24. In general, UP, NV, Focus, TSN, and Obozrevatel have also been labeling advertisements insufficiently.

No jeansa was detected on the websites of Liga, Suspilne, Ukrainska Pravda, Dzerkalo Tyzhnia, Babel, NV, Hromadske, Radio Liberty, Ukrinform, and Focus during the monitoring period.

OVERVIEW OF THE MAIN JEANSA CATEGORIES

Jeansa commissioned by commercial companies amounted to 49% of all content with signs of commission recorded during the monitoring.

A year ago, we noted a positive trend: back then, almost 80% of commercial content with signs of commission were labeled (at least as "Special project," "Content from partners," "News from companies," etc.). Currently, barely half of all commercial content is labeled as sponsored. Moreover, it is labeled unevenly: content about the same company can be labeled as advertising in one media, but not labeled at all in another. For example, this curious situation happened with Rukh football club president Hryhoriy Kozlovsky and his PR. On UNIAN, the report about him being "presented with a medal, diplomas, and other awards from the Ukrainian military again" was published with a "Topical" label. At the same time, other media posted this information without any labels:

In a similar way, Channel 24 published a report about Favbet bookmaker company with a "Special Project" label, whereas RBC-Ukraine, TSN, UNIAN, and Obozrevatel advertised Favbet without any labeling.

The full-scale war has changed the content of the hidden advertising for commercial companies significantly. Now, at least half of them are hyping themselves up through their own charity foundations, supplying cars and other equipment to the Armed Forces of Ukraine, donating to well-known foundations, or distributing humanitarian aid.

In the entire monitoring sample, there was only one article with a correct "Sponsored" label – on Korespondent's website.

Almost all the media that were included in the monitoring wrote about the opening of McDonald's restaurants in Kyiv. Most of these articles had balance issues, but IMI experts still considered them to be socially significant and did not count them as jeansa. We hope that big international corporations will show social responsibility and respect for Ukrainian citizens by not resorting to violating Ukrainian advertising legislation.

Akhmetov, his companies and foundations

According to the monitoring, 16.3% of content with signs of commission and balance issues were articles published in the interest of Rinat Akhmetov. The vast majority of these articles related to the humanitarian aid provided by the Akhmetov Foundation and his companies: 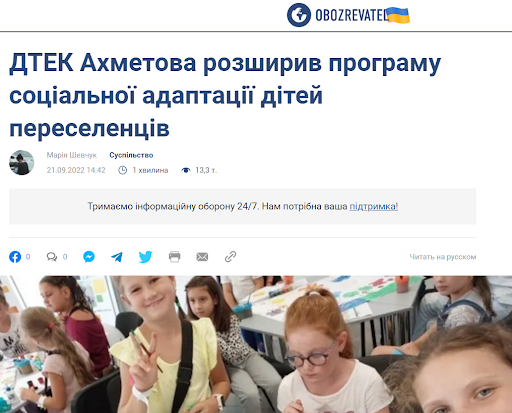 In third place in terms of quantity belongs to questionably balanced articles about advisers to state structures, in particular the President's Office. Some of these articles are socially significant and were not included in the monitoring. Still, there is an obvious imbalance in the media in terms of quoting these experts compared to other speakers. For example, the media are very active in citing Oleksiy Arestovych's Telegram channel where he comments on literally all events in Ukraine and in the world and at the same time promotes his video blog, which he runs together with the Russian politician and former lawyer Mark Feigin.

For instance, this is how often Arestovych's comments appear on the TSN website: 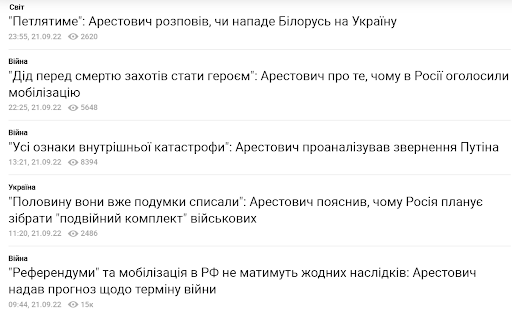 Commenting Arestovych's mission at the OP to DM, Podolyak said, "Arestovych's function is absolutely simple – he explains the psychology of war. He tells us about why war is a difficult process, and at the same time tries to give hope that we will handle it."

As Detector Media reported, in May 2022 it became known that Oleksiy Arestovych positions himself as a brand: his first and last names are registered for dozens of services.

The war has greatly reduced the amount of political content in online media. Accordingly, the amont of political content with signs of commission also dropped sharply. Individual politicians, as well as commercial companies, are now mainly promoting charities and commenting on the war. For example, Artur Palatny, a former member of parliament from European Solidarity, announces a crowdfunding for drones:

Poroshenko is supplying UAVs to the front line:

News about the Verkhovna Rada passing draft lawи, which come from individual people's deputies, also raised questions among the experts. For example, the head of the "Servant of the People" party Olena Shulyak spoke about post-war housing reconstruction:

Holos people's deputy Yaroslav Zheleznyak spoke about the draft bill on the military registration of women:

Such news items contain balance issues, and it would be worthwhile to get a comment on these events from other factions as well, if it is a socially significant matter.

We remind you that commissioned content is used for various purposes: to promote one's goods or services (commercial jeansa), to receive additional political dividends (political jeansa), to whitewash your reputation (image jeansa). But the purpose of such content is always the same – manipulating the public opinion.