Jeansa in online media. Monitoring report for the 1st quarter of 2020

The main sponsor of jeansa in online media outlets was the party "Opposition Platform - For Life", which accounted for 41% of the stories that had some attributes of being pre-paid stories, whereas all other political forces together numbered only 9.5% of the publications of the sort.

Such are the results of the survey held by the "Institute of Mass Information" NGO in March 2020 in 18 online media, the full sample was more than 20 thousand news items*.

The second place among the main sponsors of jeansa in online media was up to commercial companies, which accounted for 32% of such materials. Compared to the fourth quarter of 2019, in March the number of ordered stories from commercial companies fell almost twice.

During the monitoring period, the ratio of political and commercial jeansa was 62% and 38%, respectively. The increase in the number of political stories which had signs of being pre-paid in the first quarter of 2020, compared to the previous quarter, could indicate that the parties were preparing themselves for local elections. 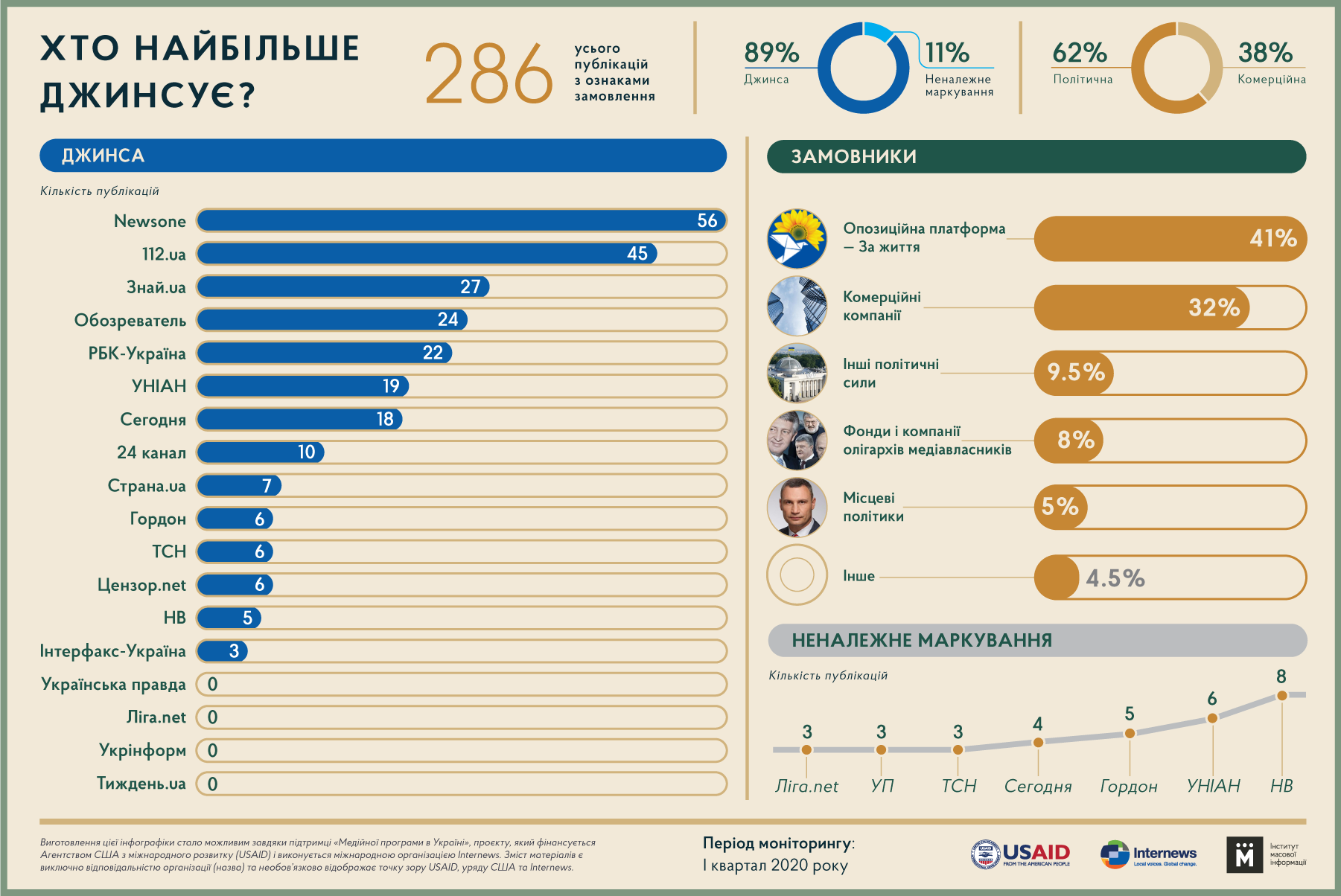 In total, 11% of stories with signs of being paid-for were conveniently marked as advertising. This marking does not comply with the law, so these materials were classified as improperly marked.

OVERVIEW OF MAIN CUSTOMERS OF JEANS

IMI's monitoring revealed two resources that can fully claim the title of party mouthpieces of the OPFL : The 112th Channel and NewsOne. These were the resources that came to the top position in terms of placing of pre-paid stories, in particular in favor of Opposition Platform- For Life (OPFL).

Most of the commissioned stories of this political party aimed at discrediting the government, especially the then Prime Minister Oleksiy Honcharuk:

The representatives of this political force were also outraged by the Minister for Foreign Affairs Vadym Prystaiko saying they would not celebrate May 9 (Day of Victory in the war over faschists). Vadym Rabinovych recalled the narratives of Russian propaganda about salvation of Ukraine from fascism and Nazism:

Materials in favor of OPFL were also found on the sites "Znay.ua", "Strana" and "RBC-Ukraine". 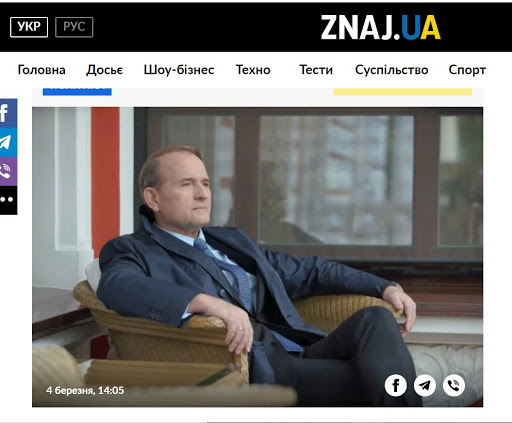 In total, 41% of the total amount of would-be pre-paid materials was placed in favor of this political force.

According to the IMI monitoring, commercial companies accounted for 32% of the total number of stories that would have been pre-paid.

Advertisement of alcoholic products, namely Dovbush Karpatsky cognac, was found on eight of the 17 sites subjected to the monitoring. Only two sites, "Censors" and "Strana" marked such materials were with the words "advertising" and "for advertisement purposes", respectively, they were not included to the survey, as they were properly labelled as advertising. Four other sites had "news items" about cognac were placed under heading such as "To the point" or "Company News", which is an inappropriate labeling. There were some disguised advertisement of cognac on Znay.ua and Channel 24 websites, which were not marked at all.

The Law of Ukraine "On Advertising" strictly regulates the advertising of alcoholic beverages, but contains some gap, which is related to online media. According to IMI lawyers, the law in this part is outdated and needs to be amended in accordance with actuality on the media market (in particular, regarding the labeling of native advertising). 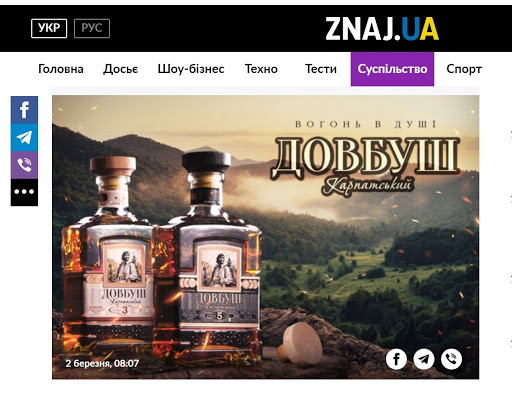 Disguised advertisement materials from commercial customers are often placed with tags such as "Company News", "To the point", "Window", "Special Project", etc. IMI reminds that such marking, even if it is explained in a separate section of the site, is not clear to the audience and does not meet the requirements of Ukrainian legislation.

Other customers included Rozetka, Uklon, Ukrlandfarming, Blago, automakers and smartphone manufacturers, Citrus, Alfa-Bank and others. At the same time, the number of commercial jeansa customers has almost halved compared to the previous monitoring period (4th quarter of 2020).

PR of other politically interested entities accounted for an average of 9.5% of the total number of materials with signs of being paid-for. For example, IMI experts found materials in favor of Petro Poroshenko:

Former Prime Minister Arseniy Yatsenyuk also spoke about the supply of water to the occupied Crimea:

The MP Oleg Lyashko, for his part, demanded that " the government immediately adopt a resolution on the indexation of pensions " (112) and "  to ban the import of Russian and Belarusian electricity " ( Sehodnya).

Funds and companies of media-owned oligarchs

A significant part of the would-be ordered materials, namely 8%, were trendy articles in favor of the oligarchs, including media owners and their funds and companies.

For example, Rinat Akhmetov, a former member of the Party of Regions, promoted his own fund. Most of these stories were placed in the media that are part of his media holding "Media Group Ukraine" , for example on the site "Sehodnya":

The activities of this fund targets Akhmetov's estate, namely the eastern regions of Ukraine.

Boris Kolesnikov, Akhmetov's former ally in the Party of Regions, also has his own foundation. He has congratulated women in occasion of March 8 and holds competitions for students .

Regional gas companies, which are connected with Dmytro Firtash, were actively promoted:

PR (and anti-PR) of local politicians accounted for 5% of the total number of would-be ordered stories.

In particular, a number of materials targetting the current mayor of Kyiv Vitali Klitschko were recorded on the Znay website:

Several stories in favor of the deputy of the Kharkiv regional council Yulia Svitlychna were recorded:

and the mayor of Dnipro Borys Filatov:

The publication was prepared based on the results of monitoring conducted on March 2-6, 2020 in 18 popular Internet media: Obozrevatel, Znay.ua, Channel 24, Gordon, Ukrainska Pravda, Novoe Vremya, UNIAN, "Sehodnya", TSN, 112.ua, NewsOne, RBC.ua, "Liga", "Ukrainsky tyzhden", "Interfax", "Strana", "Censor". The sample covers all news in a row that appeared on the sites during the specified period (more than 20 thousand news items).