Jeansa in online media. Monitoring report for 3rd quarter of 2020

Only 11 of 50 the most visited news websites did not had news items having features of pre-paid journalism. These are the results of the monitoring into 50 the most popular websites according to the rating of Similarweb, conducted by IMI.

70% of the stories with the signs of being ordered covered politics, as local elections approach. On the other hand, only 15% of ordered stories on economics were revealed during the monitoring period, 8.5% of them were news of lobbying or anti-lobbying nature. 6.5% of news were image-establishing news.

7.5% of ordered stories on politics were anti-PR. 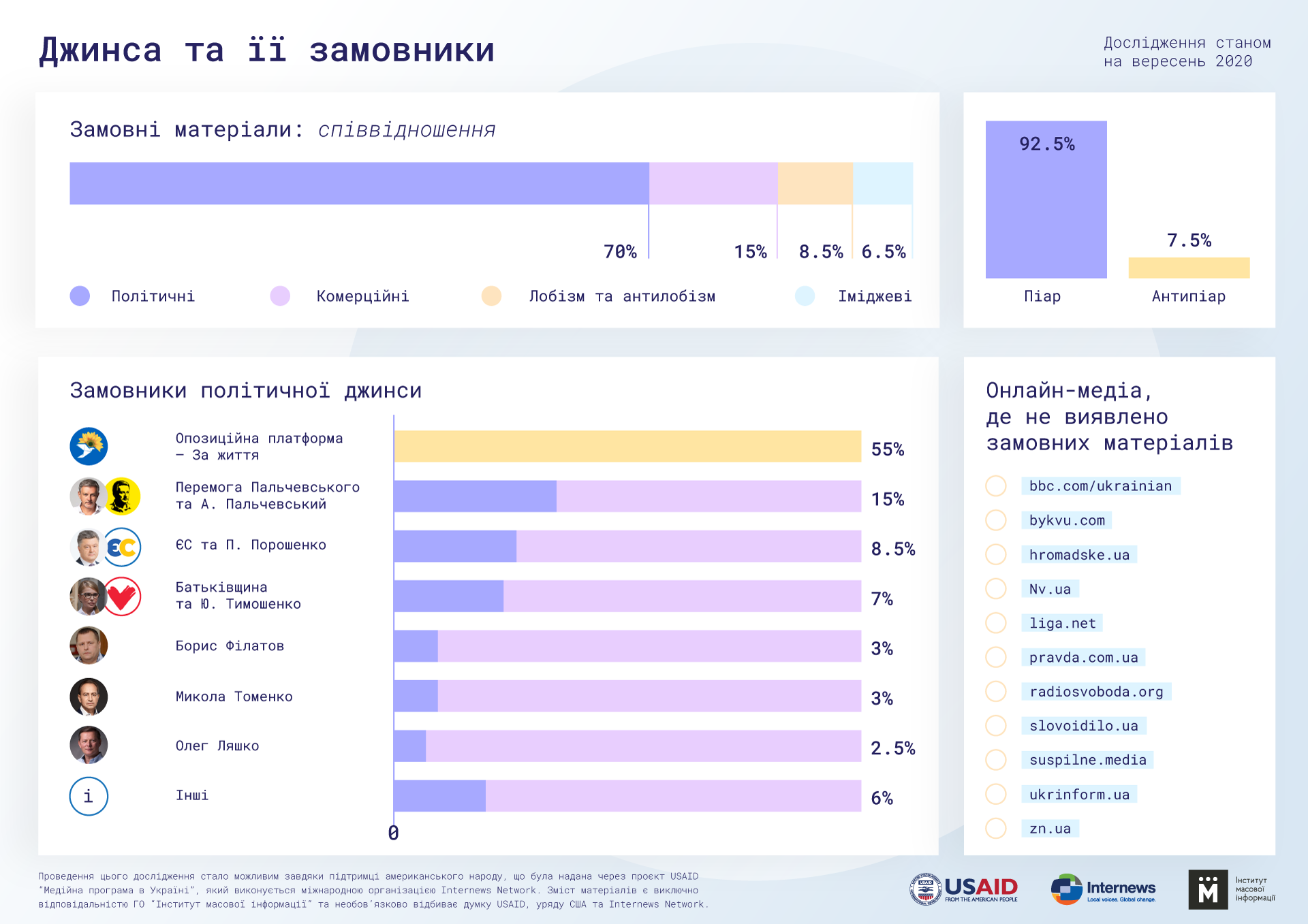 15% of the stories with signs of being ordered were news items covering the Kyiv Mayoral candidate Andriy Palchevsky and his party “Palchevsky’s Victory”.

The third political force among the three most active customers of political jeansa was the party of ex-president Petro Poroshenko "European Solidarity" (8.5%).

7% of the ordered stories were found out to be PR for Batkivshchyna party and its leader Yulia Tymoshenko.

Stories with signs of the political order

So, IMI experts divided the ordered stories on politics into

PR and anti-PR. One should note, anti-PR accounted for 7.5% of ordered political news. Most of these news targeted the current mayor of Kyiv Vitaliy Klitschko.

More than half of the ordered materials were the PR of the party "Opposition Platform - For Life".

Most of them were publoshed on the sites of TV channels associated with Viktor Medvedchuk: the sites of Channel 112, Newsone and ZIK. The media owner employed the channels under his control to promote the interests of the political force, which he is a member of.

So, it is quite easy to foresee that the main speaker in the stories in favor of OPFL was Victor Medvedchuk:

A pool of experts and commentators works to promote and protect the interests of Viktor Medvedchuk and the party.

For example, Vitaliy Romanchenko, political analyst and leader of the Union of Young Forces, said Medvedchuk was right, there was no alternative to the Minsk agreements, and political activist and blogger Mykhailo Chaplyha condemned Zelensky's alleged threats against Medvedchuk and points to his weakness and inability in the face of Putin. " Zelensky has already voiced threats against Medvedchuk, but immediately fell silent after Russian President Vladimir Putin himself replied ." Media expert Serhiy Salivon justified Medvedchuk with the story of the purchase, according to Saakashvili, of the ICTV channel: " Saakashvili and Pinchuk launched a story on Medvedchuk to hide the sale of ICTV to the Russian oligarch ."

In terms of number of unmarked PR, the second position was taken by the Kyiv Mayoral candidate Andriy Palchevsky: stories on him accounted for 15% of the ordered news.

Most of the news in his favor were published on the Khvylia, Znay.ua and RBC-Ukraine websites.

Palchevsky talked about his fearlessness and criticized his main rival, incumbent Mayor Volodymyr Klichko: " Palchevsky revealed the recipe for his fearlessness ," " Andriy Palchevsky pointed out mistakes in the infrastructure of the capital and the work of the current mayor of Kyi Volodymyr Klichko ." He also commented on the coronavirus cases developments (" Palchevsky doubted Stepanov's statistics on coronavirus "), IMF loans (" Palchevsky:With the IMF loans the government covers only a small budget deficit ") and, as once Korolevska had, he also has a dream (" Andriy Palchevskyy: "I believe that we can make Ukraine great ").

This politician also has his own pocket experts. Thus, political scientist Petro Oleschuk said : "The rating of the new political force" Palchevsky’s Victory" is a weighty application to form his own faction in the Kyiv City Council." Another political scientist, Anatoliy Oktysyuk, stood guard over the mayoral candidate's interests and assured that "Palchevsky's Victory" would be able to keep its high Kyiv rating for the whole Ukraine. "

The ex-president and his party account for 8.5% of the ordered stories. This indicator was mostly guaranteed to Poroshenko with the site of his Pryamyy Channel. Like other media owners, Petro Poroshenko actively influences the editorial policy of his channel to promote his interests and the interests of his party.

However, it should be noted that while Medvedchuk's channels, in fact, mostly promote Medvedchuk himself, Poroshenko gives priority to other EU members on Pryamyy TV Channel:

Poroshenko does not betray his main ideas "Army, faith, language": "Poroshenko came under the Parliament: The state language in Ukraine is attacked to the benefit of Kremlin ", " Poroshenko reminded of the 25th anniversary of the All-Ukrainian pilgrimage to Zarvanytsia ."

The news with signs of a commercial ordering accounted for only 15% of the total number of ordered news items.

In the context of the lockdown the companies which are engaged in delivery, Internet services, shops actively place the stories:

Interestingly, the pandemic brought to the market another jeansa’s customer which are pharmaceutical companies:

This category of ordered stories accounted for 8.5%. Such materials mainly lobby for the adoption or non-adoption of certain bills. During the monitoring period, these were the news on adoption of the draft law on gambling:

and against the bill:

This type of pre-paid journalism accounted for 6.5% of jeansa. These are mostly foundations of politicians or politically affiliated persons.

Media owners activelyemploy their media to promote their own political interests.

Politicians stock up on pocket experts and commentators for the period of election campaign.

The pandemic has made its adjustments to the order of economic jeansa.

Politicians and politically affiliates use their funds for their own PR.

Political and economic structures use jeansa to lobby or anti-lobby certain bills.

The monitoring was conducted from 13 to 17 July 2020 inclusive. All the news published in the newsfeed whine the monitoring period were analyzed.

We studied the 50 most popular online editions according to the rating Similarweb: