Commercial news items with attributes of order began to prevail over political jeansa in online media. 21% of the would-be commissioned news were aimed at promoting or opposing certain economic or political decisions, lobbying or anti-lobbying of bills, government decisions, etc. The second place (17%) was up to news items with signs of ordering in favor of commercial companies, banks and corporations.

For the first time in the last few years, jeansa in favor of OPFL (Opposition-for Life party) dropped to third place in the ranking of jeansa customers and moved to a new online edition, which is "Strana.ua" website.

These are the results of a study by the NGO "Institute of Mass Information", which was conducted on February 1-5, 2021 in 17 online media, the full sample was more than 20 thousand news *.

“Obozrevatel” (78 news items with order signs) and Politeka (49 news items) became anti-leader sites for placing news which had attributes of being ordered. Jeansa were not found on the sites "Ukrainska Pravda", "Dzekalo Tyzhdnya", "Suspilne" (UA;PBC), "Bukvy", "Liga" and TSN. 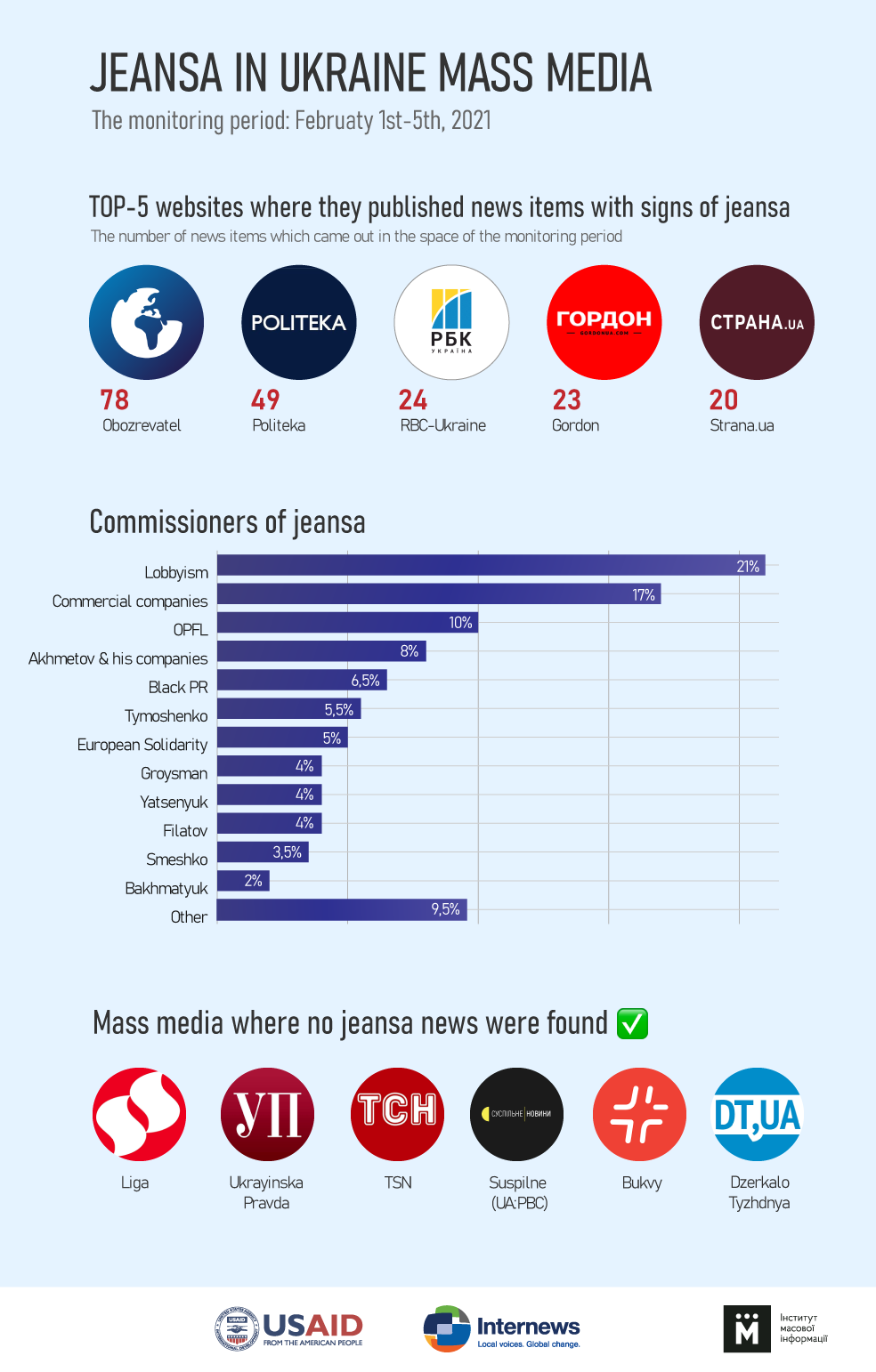 Another 12% of news items with signs of the order were marked with various symbols. The most inappropriate marking among all sites was found on TSN (12), in second place was on UNIAN (11).

Among the positive points that we would like to note : the site of Channel 24, which has updated its editorial policies, introduced special tags for marking commercial advertising and separating it from journalistic materials 24tv.ua. Expert assessment of compliance with special marks will be conducted in the next quarter.

The sites of channels 112 and NewsOne taken down from the list of analyzed sites, as these channels were subject to sanctions and were blocked in accordance with the decision of the National Security and Defense Council and the decree of the head of state. This affected the results and immediately reduced the number of ordered news items in favor of OPFL.

OVERVIEW OF THE MAIN CATEGORIES OF JEANS

21% of news items with signs of the order were aimed at promoting or counteracting certain decisions of economic or political nature, lobbying or anti-lobbying of bills, government decisions, etc.

For example, this is a series of messages calling for the abolition of import sulfuric acid quotas:

The Ministry of Economy created corruption schemes in the market of sulfuric acid, - a MP

MP Magomedov: The Ministry of Economy has single option: to remove corruption schemes of the previous government and to cancel quotas on import of sulfuric acid

First of all, such news items are beneficial for metallurgical companies that use sulfuric acid as a raw material.

In addition, Ukrainian metallurgical enterprises advocated the extension of the actual duty on scrap metal exports:

Metallurgists stand for extending the duty on scrap exports

Metallurgists stand for extending the duty on scrap exports - Kalenkov

These materials from different sites even had the same headlines.

IMI experts also included in lobbying a series of nerws that promoted the reform of Ukrzaliznytsia and the adoption of the relevant law:

UZ is trying to reform, but without the governmental support the process will take a long time - MP

If we want real reform of UZ, we need to pass the law, - MP

At the second place with 17% of all jeansa, the commercial companies were found out to be. Among the socially irresponsible advertisers who violate the rules of the Law "On Advertising" and order hidden, first of all we note the producers of alcoholic beverages, such as  "Morosha” vodka , "Carlsberg beer” ,  Shabo wine.

At the same time, there is a trend among commercial companies to place advertising under conditional labels.

How to increase the speed of mobile internet, tips from Vodafone

Jobs in Kiev: ATB trade network confirmed the title of the best employer in Ukrainian trade

We draw media attention to the fact that some not very honest commercial companies may place the same advertisement in different media, both with and without tags. In particular, this was done by manufacturers of equipment and mobile phones.

For the first time in the last few years, jeansa in favor of OPFL dropped from first to third position in the ranking of customers and moved to a new resource, which is “Strana” site.

In connection with the sanctions, IMI withdrew from monitoring the sites of channels 112 and NewsOne, which are controlled by this party. Respectively, the level of custom-made news items in favor of OPFL has decreased significantly. For comparison: in the same period last year, OPFL accounted for 41% of news items with signs of ordering, ie the lion's share of the jeansa market (or in this case, even the censorship of the media owner). During this monitoring period, the OPFL accounted for 10% of news items with signs of an order. However, even the sanctions did not prevent this political force from entering the top three of the jeansa customer rankings.

Medvedchuk declared illegality of Impositing of sanctions against his colleague Taras Kozak:

Closing the channels and sanctions against Kozak are a usurpation of power - OPFL.

Party members spread a fake news about the alleged ban on Mikhail Bulgakov and his cult novel “The Master and Margarita”.

"The political censorship imposed under Poroshenko under Zelensky has been reduced to absurdity. Almighty censors from the State Committee for Television and Radio Broadcasting have imposed bans on films and books at their own discretion. even works of classics of the world and Ukrainian literature " , - they said in the message of OPFL on “Strana” website. 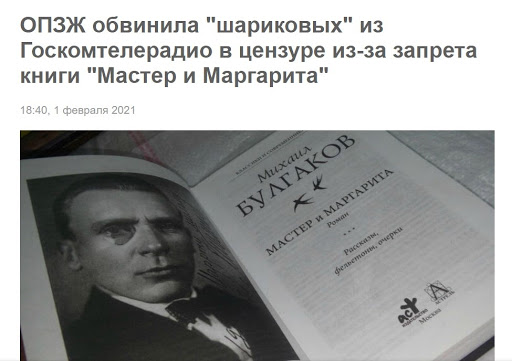 However, this information is not true: "It was forbidden to import only one specific edition of" The Master and Margarita ", which was made by the publishing house" Azbuka-Atticus ". The preface of that edition mentioned film director Yuriy Kara, actors Nikolay Burlyaev, Valentine Gaft  who expressed support of military intervention in Ukraine and so were put on the list of persons who pose a threat to national security, "as the BBC said.

“Strana” also actively broadcast anti-American and pro-Russian scare stories and narratives, such as:

“Firest of all, the authorities showed they have outspokenly danced to the Americans’s pipe(…)

Ukrainian oligarch Rinat Akhmetov's companies Metinvest, DTEK and the Akhmetov Foundation are in fourth place among customers of economic jeansa. These companies accounted for 8% of the total number of jeansa recorded in the online media.

The commissioned news in favor of Akhmetov's companies were mostly for the image, the companies "promoted themselves under cover" of their own charity projects, and a smaller part of the news was devoted to lobbying or speaking of their successes: 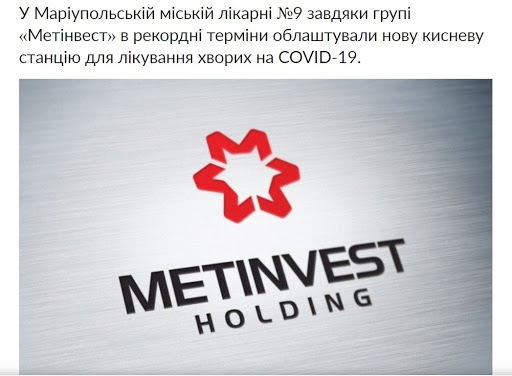 In favor of DTEK's operating company were the news on involved investments: "PJSC DTEK Kyiv Electric Networks has increased its investment program for 2021 by 35%":

In fifth place among the most popular categories of jeansa there were news with signs of black PR. They accounted for 6.5% of the total number of jeansa stories. Such newsitems were posted mainly only on Obozrevatel and Politeka.

Materials with signs of black PR were directed against NABU and anti-corruption bodies:

It all ended "as usual" - Zagorodny about the anti-corruption system

“Takes one for to know one": how the NABU bot network got burned while looking for bots

It is better to eliminate all anti-corruption bodies - Zagorodniy

And also targeted some individuals:

Coming-out of construction reform: what its author hid

The sample covers all news in a row that appeared on the sites during the specified period (more than 20 thousand news).