53% of IMI women journalists surveyed said they had been sexually harassed in the aspect of their professional activities. 47% of women journalists said that they did not face any harassment while performing their professional activity or due to it. These are the findings of an anonymous target-focused survey of media professionals conducted by the Institute of Mass Information in cooperation with the NGO "Women in Mass Media" and with investigative journalist Lyubov Velychko on June 14-25, 2021 *.

In addition, 33% of respondents said that they had witnessed sexual harassment of their colleagues in connection with journalistic activities. 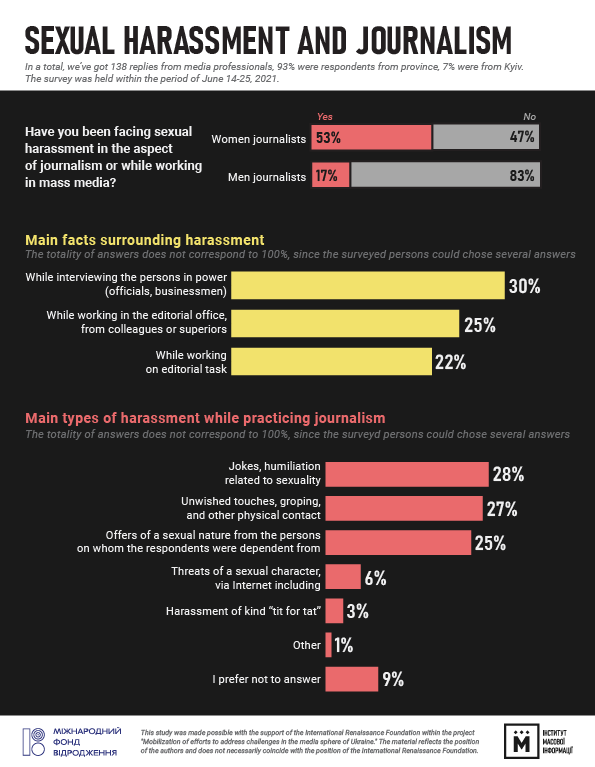 Circumstances, geography and types of harrassment

To the question "Where exactly have you personally experienced sexual harassment or noticed sexual harassment of others?" 30% of all respondents indicated that this happened during interviews with people in power (officials, businessmen). In second place, these were the facts of harassment in the editorial office, from colleagues, management or employer (25% of respondents mentioned this). And in third place there were facts of harassment while working on an editorial task (22% of respondents). Such results indicate a fairly high level of risk and low security of media not only outside the editorial office, but also in editorial teams.

Survey female participants told IMI anonymously about sexual harassment while practicing journalism. The vast majority of these stories were harassment of women journalists by men: government officials, officials, MPs, businessmen, and less harassment by media owners and newsroom managers. Among the examples, on condition of anonymity the respondents mentioned the following:

Regarding the geography of harassment, more than a third of the respondents who indicated that they had been sexually harassed were residents of the western regions (37%), followed by the central regions of Ukraine (33%). The less incidents occurred to the media professionals from the south (16% of all respondents who were sexually harassed) and eastern Ukraine (11%). Another 3% of respondents did not indicate their region.

Regarding the types of sexual harassment, female and male journalists most often have been encountering harassment, which manifested itself in the form of jokes and humiliation related to sexuality (28% of respondents) as well as unwanted touch, groping, and other physical contact (indicated by 27% of respondents).

Another 25% of respondents indicated that they had a negative experience in the form of offers of a sexual nature from the persons on whom the respondents were dependent from (25%).

6% of respondents were sexually harassed, including through the Internet, and another 3% were harassed as "tit for tat" **.

Most often in such cases, journalists report it to one’s friends or relatives (49% of respondents) or colleagues (47% of those who have been sexually harassed). Only 4% of respondents dared to write about their experience publicly on social networks or tell in the media **.

A quarter of journalists interrogated by IMI said they said they did not report it to anyone (25%). The main reason for the silence about such incidents was the lack of mechanisms to protect the rights of victims, because "it will still no help" (this was said by 16% of those who were sexually harassed). In second place, it was due to fear that no one will believe, because the victims had no evidence (7% of respondents). Another 6% indicated that they feared condemnation and misunderstanding from colleagues **.

The vast majority of respondents (93%) found that the perpetrators of sexual harassment are those who did not respect the personal boundaries of others.

According to the interviewed journalists, the most effective protection against sexual harassment at work is personal understanding and planning one's own risks, according to 63% of respondents. Among the most powerful tools of protection, journalists also mentioned publicity on social networks (45% of respondents). In third place, they found it was important to complain to the police (40%).

* The survey was conducted using an anonymous targeted online survey using an interactive structured questionnaire. References to the questionnaire were sent to potential respondents - working journalists and editors. A total of 138 responses were received from the media. 93% are respondents from the regions of Ukraine, 7% from the city of Kyiv. 83% of women, 17% of men The study was conducted during June 14-25, 2021 .

** The totality of the answers is not equal to 100%, because the respondents could choose several answers

This study was made possible with the support of the International Renaissance Foundation within the project "Mobilization of efforts to address challenges in the media sphere of Ukraine." The material reflects the position of the authors and does not necessarily coincide with the position of the International Renaissance Foundation.