IMI: Violation of freedom of speech was recorded in 11 regions of Ukraine in November 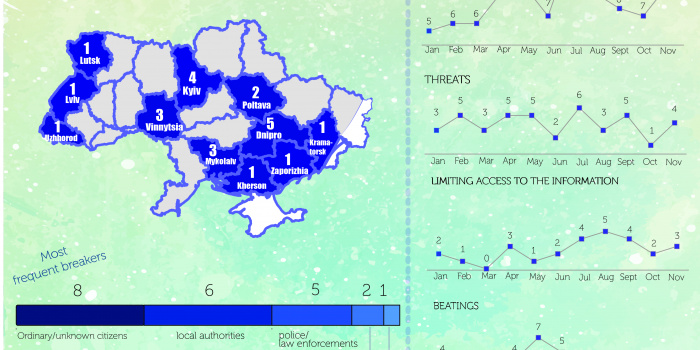 The main violation of the rights of journalists was obstruction of the professional activities of journalists in November, in Ukraine. Cases recorded in Zaporizhia, Vinnytsia, Volyn, Dnipropetrovsk, Kyiv, Kherson and Donetsk regions.

Mostly nameless citizens, guardians and representatives of the local authorities violate the right for professional activity in November.

Number of obstacles in November increased by half comparing with October. Since the beginning of the year, this category stays as the leader of violations of the journalists' rights. There were shuttings of cameras or tryings to pluck it off the journalists. Journalists were not allowed to the meetings in the municipal councils, there were forbiddings of capturing or selective allowness for open government events.

In Zaporizhia, the journalist  of TVchannel "24" Oleksandr Kryzhanivsky call on the police about the obstruction of his work by the guards of Zaporozhye Titanium & Magnesium Combine. The guard did not allow the journalist inside the territory and shut the lens of camera with his hand.

In Lutsk, journalists and the public couldn’t get inside the hall where was the meeting of the interim control commission of the Volyn regional council, which dealt with the question of dismissal the director of sanatorium "Prolisok"(Snowdrop). Myroslava Yakymchuk, the Head of Department on management the joint ownership of territorial communities of villages, towns and cities in the region council was standing at the door preventing journalists go to the meeting.

In the city of Pavlograd (Dnepropetrovsk region) the journalist of the local newspaper "Holos Shakhtaria" (Miner’s Voice) and representative of co-op (housing cooperative) "Leningradska str., 11/2" - Svitlana Honchar was withdrawn from the office where she came to prepare an investigative case. Svitlana Honchar told IMI that she already was at several court hearings on the case in which resident requires the chairman of co-op "Leningradska str, 11/2" to provide him with a number of financial documents relating to the activities of co-op.

In Kryvyi Rih (Dnipropetrovsk region) City Council officials asked journalists to leave the meeting of the City council working group which was reviewing the issue in setting tariffs for marshrutkas (routed taxicabs).

In Dnipro city representatives of the communal enterprise "Municipal Guard" blocked the entrance to the City Council, where was the meeting of the executive committee of the Dnipro City Council. As a result, neither the citizens nor the reporters could not get into the hall where the meeting was. Journalists appealed to the press service of the City Council, but security still didn’t let them through.

Oleg Yarmolynskyy, the journalist of TV channel "Pershy miskyy"(City’s first) was blocked in the elevator of the Kryvyi Rih city council (Dnipropetrovsk region). The journalist, due to his professional duties, tried to reach the floor where was conducted the search in the management of the Kryvyi Rih internal improvements office. A man in khaki clothes with a gun blocked journalist the way out from the lift, with no explanations about what is going on. Unknown hit the camera and repeatedly pushed media’s employee and didn’t let him out from the elevator.

In Kherson, the crew of Kherson TV Kratu was removed from the extraordinary meeting of the Academic Council of Kherson State Agrarian University. Board members voted by majority for the crew removal from the meeting and took a break.

IMI recorded a growing number of threats to the media - 4 (Kyiv, Poltava, Vinnytsia and Mykolaiv) in November. Journalists were threatened with physical contact or by phone. Mostly, unknown have been threatening. In one case – the threats came from Vyacheslav Apanasenko, the deputy of Mykolaiv City Council.

In Poltava, the unknown threatened Nina Korol, the journalist of the "Kolo"(Circle) media. The unknown was using offensive words and prohibiting publishing material on which she worked. The topic is a conflict situation that has arisen around the pond on the territory of Poltava Regional Psychiatric hospital.

In Mykolaiv, Vyacheslav Apanasenko, the deputy of Mykolayiv City Council from the "Samopomich" party, threatened Andriy Prokopenko, the journalist of "Svidok.info" media. The deputy said that journalist will answer as "a man" for publishing a criticism about him.

In addition, IMI recorded 3 cases of restriction of access to public information in November. The local authorities denied access to information for journalists - Lviv  and Kryvyi Rih city councils and the Office of Security Service of Ukraine in the Mykolaiv region.

Lviv City Council is not answering the request from the “Hromadske.Lviv” for more than two weeks, while the term for answers is 5 working days. The request relates the topic of Hrybovytske landfill, its reclamation and garbage removal from the city.

The Office of Security Service of Ukraine in the Mykolaiv region refused to give copies of the documents to Tetiana Medvedeva, the journalist of the Mykolaiv center of journalistic investigations. The documents are the declaration of assets, expenses and financial obligations for 2014-2015 years of the Head of the Office and his deputies. The reason of refuse – the information is a state secret.

There were 2 cases of lawsuits against journalists, all of them relating to upholding the right of Access to public information.

Journalists from the initiative "Vidkrytyi dostup" (Open access) filed a lawsuit to the Avtozavodskyi District Court in Kremenchuk (Poltava region). The lawsuit is against the municipal enterprise "Kremenchuk trolleybus management" (KTM), which refused to provide an information about financial statements on request. In particular, the company has not provided information on three requests. Journalists are asking the court to declare refusals of KTM as illegal and obligate the enterprise to provide the necessary information.

In addition, IMI recorded 1 case of cyber-attack, legal pressure, the attack on the office of the media.

The Mykolaiv Internet edition "Prestupnosty.NET" for two weeks is under the massive DDoS-attacks.

In Uzhhorod (Zakarpattia region) representatives of Uzhgorod Police Department of the Main Office of National Police, intervened in the work of the crew of the “CIA” special project of "24" TV channel near the Prosecutor’s office of Transcarpathian region. Journalists conducted a journalistic investigation  on the fortune of Ivan Shymon, the deputy prosecutor of Transcarpathian region. Journalists came to the prosecutor's office to talk with him; during the shooting the police car blocked the journalists’ car.

Thus, IMI recorded 1 case of murder, 97 cases of obstruction, 28 cases of beatings and attacks on journalists and 7 cases of censorship since the beginning of the year. 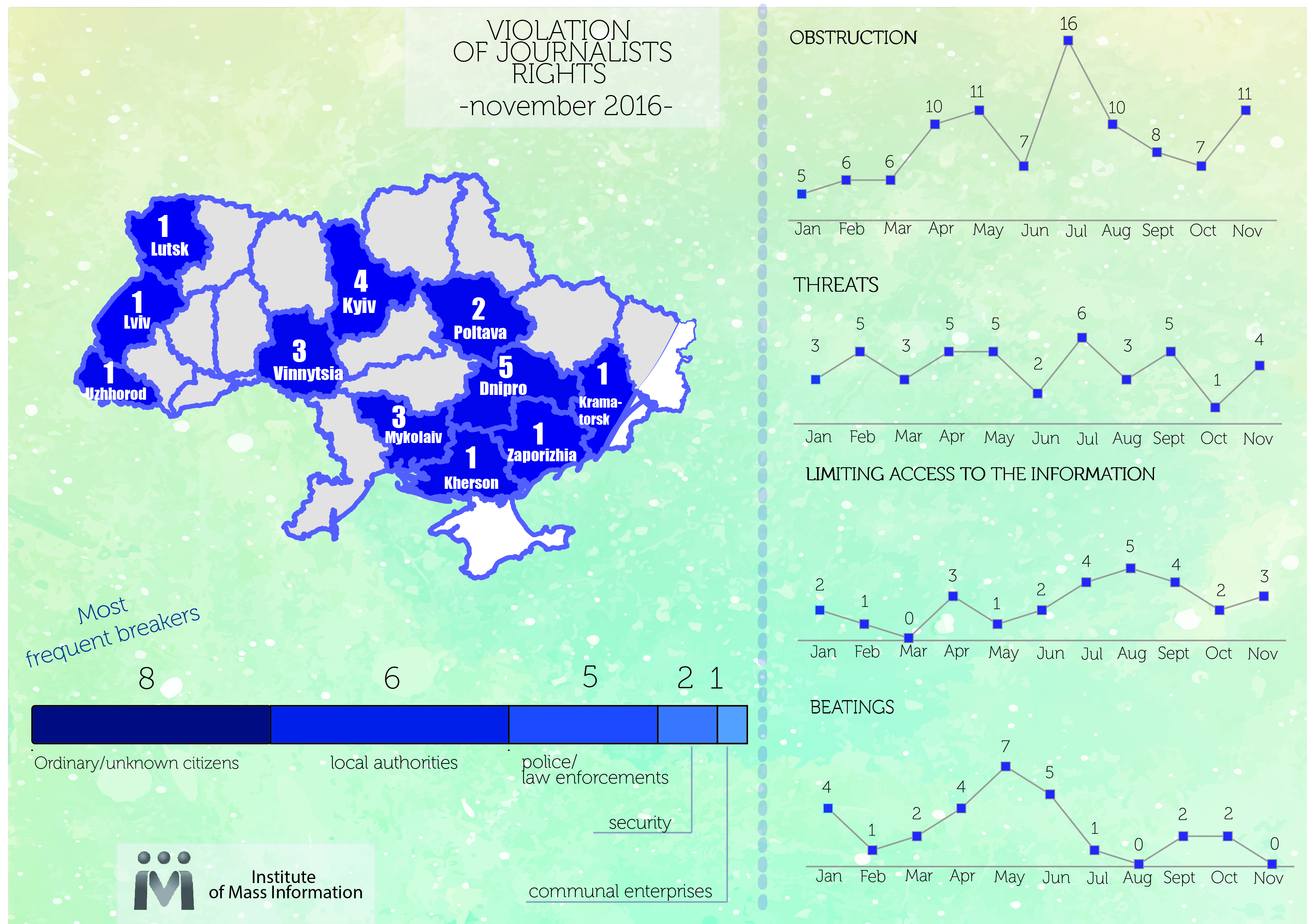 "Freedom of Speech Barometer" is an analytical product of monthly monitoring of freedom of speech in Ukraine, conducted by NGO "Institute of Mass Information" in support of "U-Media" project, implemented by "Internews Network" supported by the US Agency for International Development (USAID) and by support Non-Profit Organization "National Endowment for Democracy» (NED). The "Network of media observers", working within the "Freedom of Speech Barometer" project, funded with support from Freedom House, the international human rights organization, and the Foreign Ministry of Norway.

Attempts to reorientate state-owned TV channels Dom and Rada are a backtracking on democratic reforms - Media Movement’s statement
News
"We were the first to learn that Russian troops were approaching Kakhovka," says "Most" editor-in-chief
SBU issues suspicion notices to two Russian officers for shelling a TV tower in Kharkiv
"We knew an attack in the morning was very likely," says IMI representative in Kherson oblast about the Russian invasion
Human Rights Watch displayed a map where Crimea is marked as part of Russia – Lubinets
Do you want to be first to learn about the new research of the Institute of Mass Information? Subscribe to the newsletter!