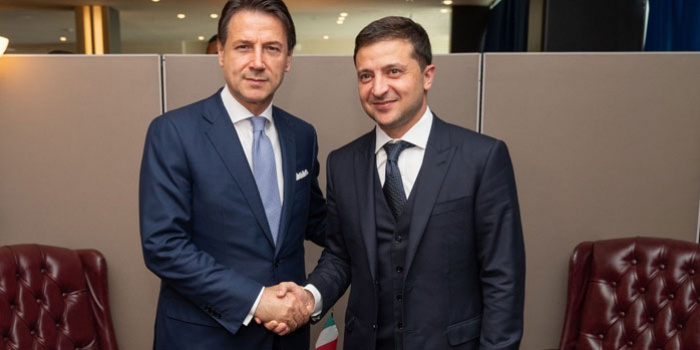 The president Volodymyr Zelensky proposed to the Italian PM Giuseppe Conte to form a joint group to investigate into the circumstances of death of Italian journalist Andrea Rocchelli, as it is said at the President's site.

He spoke of it at the meeting with the Italian PM at the 74th session of the UN General Assembly in New York. At the meeting Zelensky told he expected a comprehensive and objective investigation of the case of Vitaliy Markiv, Ukrainian citizen convicted for death of Rocchelli in Donbas region in 2014.

IMI reported, on July 122019, the court in Pavia (Italy) has condemned Ukrainian serviceman Vitaliy Markiv (who holds both Ukrainian and Italian citizenships) to 24 years of imprisonment. The prosecution said Rocchelli had been killed intentionally. As to them, while Markiv was on Karachun mount, he transmitted the data on location of the journalists to Ukrainian army. The defense of Markiv told the journalists being in war zone had no identificative marks of the press, so they got caught in the crossfire.

The Italian side refused to take investigative measures on the grounds and ignored proposition of Kyiv to form the common investigative group. Ukrainian counterpart denied Markiv having been guilty.