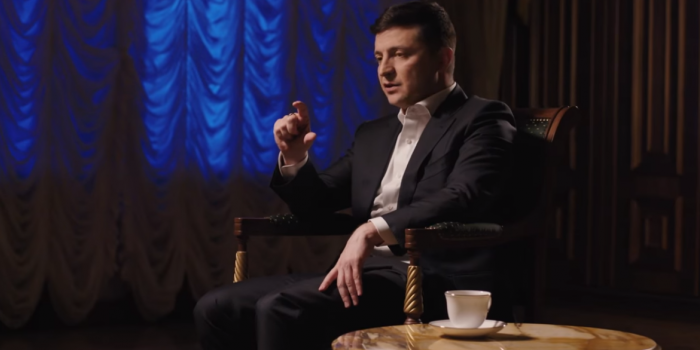 Photo credit: Screenshot from a film

The number of PR and "protocolar" of the president Volodymyr Zelensky in TV news in August doubled compared to May. This is evidenced by the results of monitoring of socio-political news for August 10-15, 2020, according to Detector Media.

According to the monitoring, Zelensky's PR appears in the news of all analyzed TV channels, except for the public broadcaster UA: Pershyy. In the spce of this week, Zelensky was mentioned 38 times in a positive context in prime-time newscasts. For comparison: in May, 17 mentions were recorded, in February - 24.

In such stories, the head of state commented on the coronavirus epidemic, spoke of cheap mortgages as achievement of his own policy, appointed a head of intelligence, met with school leavers, handed over apartment keys to victims of the Poznyaky explosion, inspected hospital repairs in Boryspil, and more.

On August 14, 1 + 1, STB, ICTV, and Ukraina aired similar stories defending the positive asects of the presidential bill on raising the minimum wage. All the stories spoke of some protagonists earning a small salary, and Zelensky and the chairman of the Council of the National Bank of Ukraine Bohdan Danylyshyn commented on this bill. Only at 1 + 1 one of the experts expressed doubts about the expediency of raising the minimum wage, but even there the general positive aspect prevailed.

Since 2015, the NGO “Detector Media” has been conducting a study of violations of news journalism standards, signs of ordering, censorship and omission of important topics in socio-political news of seven central TV channels - Inter, 1 + 1, STB, ICTV, Channel 5. , “Ukraina” and UA: Pershyy. This is the most thorough analysis of the quality of news on Ukrainian TV channels, based on the transparent methodology developed by Internews-Ukraine expert Ihor Kulyas. This resource-intensive (every digit is verified) study of news that are aired by TV channels through one week is conducted once a quarter.