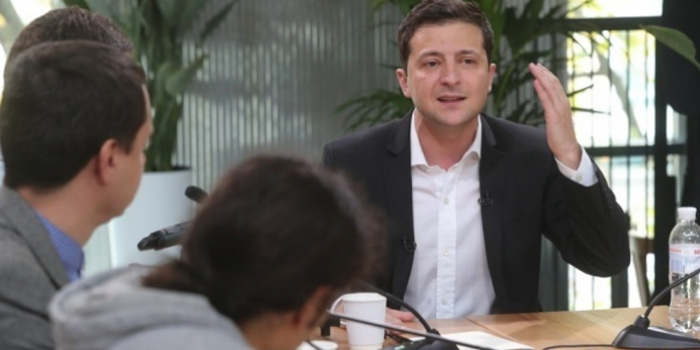 The President Volodymyr Zelensky has reproached “Novoe Vrema” with the fact that Tomas Fiala, a Czech Republic citizen, is the CEO of the Dragon Capital investment company that owns the magazine.

Zelensky burst into criticism of the weekly at the press marathon on October 10, after the journalist with “Novoe Vremya” Ivan Verstyuk asked him about the future of the system of individuals-entrepreneurs in Ukraine, as NV reported.

“I have always wanted to ask: where your company, “Novoe Vremya”, gets money from? Western? Fiala? Is he a citizen of Ukraine? "- asked the president the journalist, and in response to the fact that Tomas Fiala is a citizen of the Czech Republic, he continued:" I mean that the Ukrainian media are financed by foreign companies. Do I understand correctly ? ”

After that, Verstyuk explained to Zelensky that Dragon Capital is Ukrainian company and that all business assets of the investor Tomas Fiala are located in Ukraine. Zelensky then blamed the company CEO saying that previously, the assets would belong to the fugitive president Viktor Yanukovych.

"Do you mean all those assets after Mr Yanukovych escaped, being bought by Dragon Capital? <...> What Yanukovych is for here? Well, these are separate stories, this is, yes ... Why? Yes… to what: first, I always said about the media that they should be independent and Ukrainian. <...> Do you not think that the media and their independence, which should be all pro-Ukrainian, that the final beneficiaries should be citizens of Ukraine? There may be foreigners: come, for example - change your passport, hand over your passport (there is no dual citizenship), and then you protect Ukraine's interests, especially in the matter of information independence, ” Zelensky said.

Responding to this presidential phrase, NV journalist Ivan Verstyuk replied: "It seems to me that it would be better the EU citizens have to own mass media than corrupt oligarchs."

The Media-DK Publishing House incorporates the weekly magazine NV and the news site NV.ua, which began to function in 2014. A new stage of media development was launching of Radio NV in March 2018, which broadcasts in 40 cities of Ukraine.

The investor of Media-DK is the investment company Dragon Capital, whose CEO is an independent Czech investor Tomas Fiala.

According to IMI, President of Ukraine Volodymyr Zelensky believes that the final beneficiaries of Ukrainian mass media should be citizens of Ukraine.