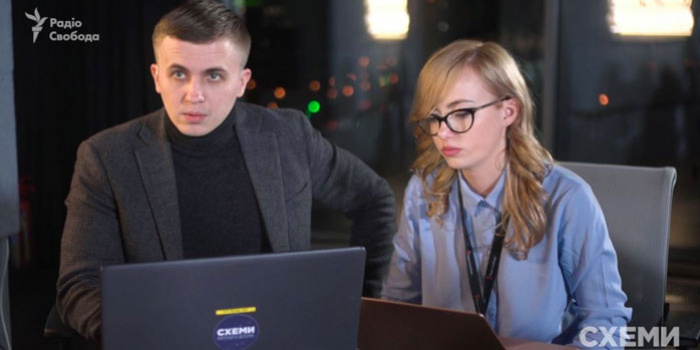 The president Zelensky found impertient the work practice of Mykhailo Tkach, journalist with Schemes, as he was gathering the information and followed the President's motorcade. Zelensky told it at the press conference held in Mariinsky Park in Kyiv today, as Znay.ua reported.

"Is there at least one country in the world where a journalist travels in the president's motorcade? Right inside the motorcade: whether he takes pictures or not, I don't care, there is  nothing to hide. Is there any president to whom bodyguards say it is inadmissible, isn’t it? , that this is contrary to the law, ask what to do , whether to stop, to seize the car, to talk to this journalist, whether they have to react? Is there such impertinence somewhere in the world? I think this is impossible anywhere. I think that between the government and journalism this is impossible to get it personal, it is impossible to break the law, whoever we are", - the president said.

Zelensky added, he didn’t react, "because we understood that the parents of these people had failed to do something, I cannot change that, I am not a dictator."

"Although it seems to me that this Mr. Tkach is disrupting the balance. It has nothing to do with any ethics, it is about the security of the state - that's what we are talking about," Zelensky added.

He asked journalist Maksym Savchuk about the correctness of this situation. However, it was not possible to hear what Savchuk answered. However, after his answer Zelensky said that "then I have no more questions to" Schemes ".

Zelensky drew attention to the fact that Radio Liberty, which project is the "Schemes" program, is funded by the US State Department, and said, "what a free country, a democratic one, what is the attitude towards the journalists who are funded not even to Ukraine, but by other countries. "

"I don't even see any problem that Mr. Tkach is where I live, where I travel, where I work. Every day he is always at watch as an employee of National security agency (UDO). I don't see any problems in that, the state even has to pay him salary, because it's big work ", - the head of state noted.

For his part, Mykhailo Tkach noted that Zelensky mentioned his parents because the president did not have arguments pertinent to his position.

"What motorcade of the president Zelensky did I joined, if they promised there would not be motorcades? Unfortunately, I did not attend the press conference to be able to answer immediately. The president switched to personality matters once more. And this time, he had no arguments at the level pertinent to the head of state, he spoke of my parents. My answer will follow soon, "Tkach wrote on Facebook.

Natalia Sedlecka, editor-in-chief of Schemes, also commented on Zelensky's remarks, noting that the Ukrainian authorities are annoyed by the work of independent media covering its shortcomings and unfulfilled promises. So, as she said, Zelensky decided to publicly complain about the work of journalists.

"Zelensky even passed to personalities, making an invective against Mykhailo Tkach, the author of numerous high-profile journalistic investigations into what is really going on on the sidelines of Ukrainian politics. "The editorial board of Schemes declares that every our journalists, Mykhaylo Tkach includingly, are acying within the norms of the law and in accordance with the journalistic standards of Radio Svoboda, edition of more than 65 years of history," Sedlecka wrote on Facebook.

She noted that the work of the edition was aiming exclusively at covering socially important information, which would otherwise remain secret or non-public.

"Our journalists are guided only by the interests of society, not by some specific government or a specific president - as is the case of an independent journalism. We are preparing a detailed answer to all of Zelensky's accusations against the Schemes," Sedlecka added.