Zelensky : final beneficiaries of mass media should be Ukrainian citizens 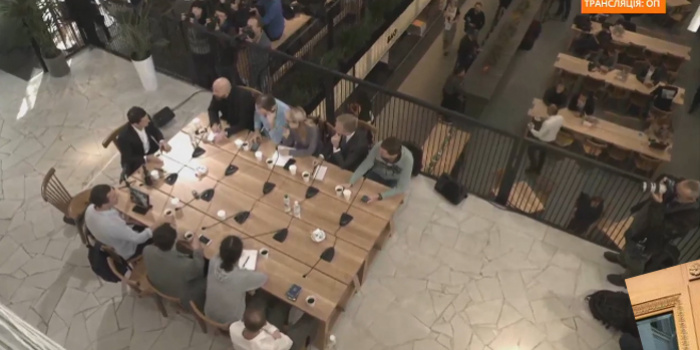 The President Volodymyr Zelensky believes that the final beneficiaries of Ukrainian mass media should be citizens of Ukraine. He said it on October 10 at the press marathon, answering the question of the journalist with “Novoe Vremya” Ivan Verstyuk about the functionning of individuals entrepreneurs in the fields of media, IT and marketing.

“I was always speaking about mass media that they must be independent and Ukrainian. Well, now we are talking about the land reform and say: this is our land, the Ukrainian land. Thus, the owners should be Ukrainians. I agree 100%. <...> Do you not think that if it is the Ukrainian media, the final beneficiaries, if it is a legal entity, must be citizens of Ukraine, don’t you? There can be  also foreigners come, change your passport, and then you protect the interests of Ukraine. Especially in the matter of information independence, ” the President said.

Journalist Ivan Verstyuk told him that he preferred the media to be owned by EU citizens rather than by corrupt oligarchs.

As IMI expert Olena Golub said, citizenship of the owners will not ensure protection of the Ukrainian interests in any way, but it can increase the influence on these citizens.

We will remind that in April 2019 in an interview with RBC-Ukraine, Volodymyr Zelensky said that he would like to seek maximum of Western investments to reinforce freedom of speech.

“But, in principle, the media should be as free as possible. The only thing, I would dream very much, since we are cut from the same clot, so to speak, from one niche, I would very much dream that the press would be independent economically, commercially. To prevent it from being paid for - articles, publications, TV programs. We think about it. We think with the guys over the bill that television is free. That they not only find money from the market. As long as the market is weak, there is no advertising market. I would like to seek western investment as much as possible to contribute to freedom of speech, ”he said.