Zelensky accused editor-in-chief of Censor.net Butusov of deaths in Donbass 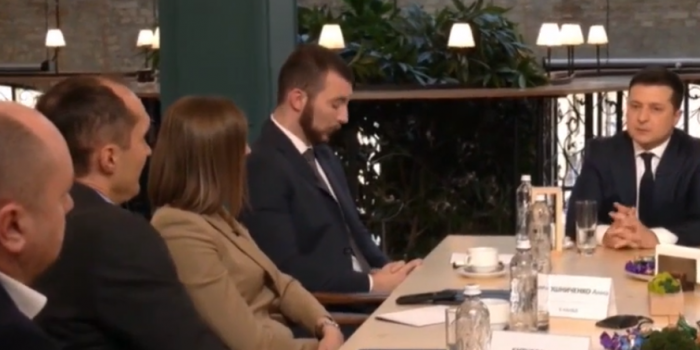 Screenshot from the video

The President Volodymyr Zelensky accused the editor-in-chief of Censor.net of deaths in Donbas due to publication of a video of a Bayraktar drone. Yuriy Butusov replied to the head of state, saying he lied, as LB.ua reported.

"Mr. Butusov, you are talking about responsibility for people's lives, for people's deaths. Since last week, I have been holding two or three international calls daily because of you, including the leadership of the EU, the USA, Great Britain, France, and Germany. Do you want me to tell why? You are the first person to show the information about the response of our Ukrainian drone against illegal formations in the temporarily occupied Donbass. You expose such information in the same way as you leaked information about Mr. Burba, ”Zelensky said after Butusov's incisive question about the current First Deputy Secretary of the National Security and Defense Council, Ruslan Demchenko.

"On your conscience, there are the death of people. After that, how many drone attacks and bombs were dropped on us! ” said the head of state.

He suggested that Butusov's actions and his bad attitude towards the authorities were due to soreness for not obtaining a position and the crackdown of the National Security and Defense Council on one of the sponsors of his publication.

In response, the journalist accused Zelensky of lying.

"Everything you have said here is a lie. And you say this in order to avoid to be responsible for yourself, for Ermak and for Demchenko. Your tactics are like this: to vilify people who write the things, to invent a lot of idle talk. Your lie is very visible to everyone, " Yuriy Butusov said.

We will remind, in the end of October it became known that the Armed Forces of Ukraine for the first time employed the Bayraktar strike drone in Donbass. The drone was used to destroy the artillery that was shelling the village of Hranitne.

Serhiy Harmash, Donetsk's representative in the Trilateral Contact Grouup, said that Ukraine had not violated the Minsk agreements when using Bayraktar.