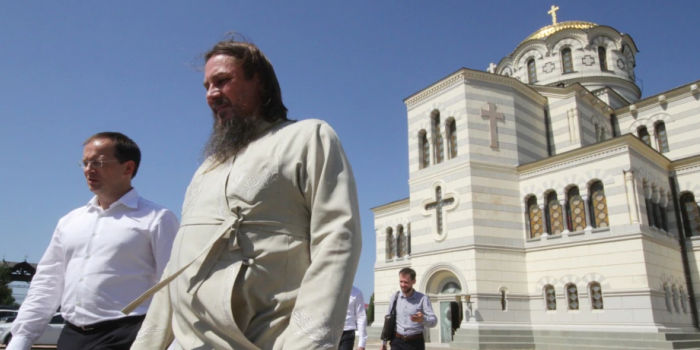 YouTube video hosting has deleted an interview with the chaplain of the Sevastopol district of the Ukrainian Orthodox Church of the Moscow Patriarchate, archpriest, dean of St. Volodymyr Cathedral in Chersonesos Serhiy Khalyuta for "hostile statements."

This is stated in a YouTube message that appears on the page where the video of the interview had previously been uploaded, Krym.Realii reports.

"In almost every (russian – Ed.) unit, in every unit, in every large brigade (of russian army – Ed.) There is a priest who does not leave his military formation. Unfortunately, there are clergymen who were wounded or died as a result of a special operation (as the russian authorities call the war against Ukraine – Ed.)," said the priest of the UOC (MP).

Priests of the Ukrainian Orthodox Church (MP) in russian-annexed Crimea and Sevastopol have repeatedly expressed support for the russian soldiers taking part in russia's war against Ukraine.

Earlier it was reported that the UOC (MP) priests in Sevastopol "reinforce the fighting spirit and maintain the right motivation" among the russian military.

On Easter, the websites of the Sevastopol denomination and the Simferopol and Crimean dioceses of the UOC (MP) published a message from the head of the Ukrainian Orthodox Church (Moscow Patriarchate), Metropolitan Onufriy, but removed part of the text.

On March 6, the head of the russian orthodox church, patriarch kirill, commenting on russia's military actions in Ukraine, did not say that he supported the russian invasion, but provided arguments to justify it. He believes that the current situation is due to the fact that some forces have been trying for eight years to destroy what exists in the Donbass – apparently referring to the armed groups "DPR" and "LPR", supported by russia. According to Kirill, there "there is a rejection, a fundamental rejection of the so-called values ​​that are offered today by those who claim to have power over the world."

On the first day of the invasion, Metropolitan Onufriy, head of the Ukrainian Orthodox Church of the Moscow Patriarchate, which is in prayer unity and partial subordination to the ROC, sharply condemned him, calling russian president vladimir putin's actions analogous to fratricide. A number of UOC (MP) dioceses stopped mentioning patriarch kirill during services.