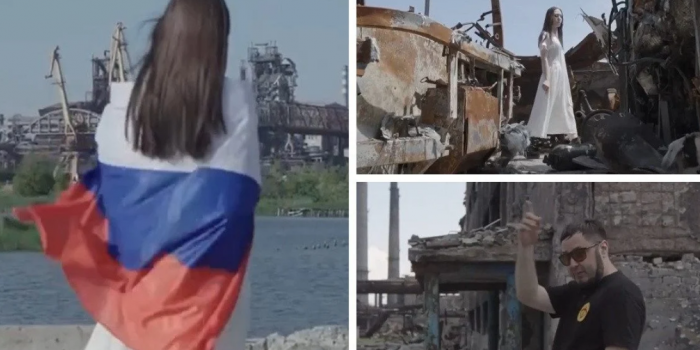 YouTube blocked the song "Plyve Kacha" by russian propagandist Akim Apachev and singer Daria Frey from Mariupol that had been posted on the propaganda channel "Power Is In Truth."

russian composer Alex Caspian (Taghir Mandzhiev), at whose request the music video was blocked, told Detector Media about this.

According to the musician, who is a resident of the Ukrainian label Ukraine Dancing, on July 7 he filed a YouTube complaint against this music video for promoting terrorism, and the video hosting company fulfilled his request.

"The reason why I chose this song and this channel is anti-Ukrainian propaganda. A cynical clip on the ruins of Mariupol, which was destroyed by the ruscists," said Alex Caspian.

The musician believes that YouTube should completely block the "Power Is In Truth" channel for spreading anti-Ukrainian propaganda. This channel now has over 90,000 subscribers.

The propaganda song "Plyve Kacha" premiered on YouTube on May 19 on Akim Apachev's channel. The song is written in a distorted Ukrainian language, which the author calls his "trophy." The clip was filmed on the ruins of Azovstal, using video footage of interviews with Ukrainian soldiers from the Azov Regiment. Editor-in-chief of the RT channel Margarita Simonyan stated on Twitter that the music video was filmed by the channel.

After the release of the music video, social media users called to file a complaint against it for promoting terrorism. But in the end, the the video was blocked for violating the hate speech policy – it provides for the removal of content that promotes violence or hatred against individuals or groups of individuals based on various characteristics, including ethnicity, combatants, etc.