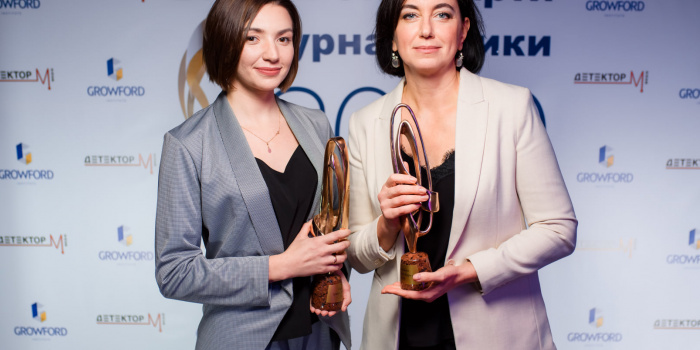 The winners of the national Award "High Standards of Journalism - 2020", were announced on December 12, as this was reported on the website of the award.

In the category "For a quality regional / niche media project", the prize was granted to the publication "Krym.Realii". Volodymyr Prytula, editor-in-chief of the Krym.Realii project, said that the monetary part of the award would be given to the children of Crimean citizens who became victims of the Russian annexation of Crimea. To the children of activists, citizens journalists detained for political reasons by the Russian authorities, including Mark Shaymardanov, the son of an activist, Timur Shaimardanov, who had gone missing during the Russian occupation of Crimea in 2014.

Liga.Life editor Iryna Andreytsiv was recognized the best in the category “For fast and high-quality development in the profession” . “I am convinced that only indifferent people who are grieved with can be high-quality and valuable journalists. (Persons – n/tr) who have enough patience to immerse themselves in the subject and, in particular, to read boring laws. Few have values ​​and dignity, but they are there. And I am glad to be among them today, ”Iryna Andreytsiv said at the presentation.

The winner in the category "For a sustainable, high-quality media project / product" was the journalist, TV presenter Myroslava Barchuk. “I don't see it as personal, but as a team award: often shadow work determines the quality of our product. I want to say a few words about this team. We try to conceptualize the classical standards. We try not to balance between truth and falsehood. We try not to pretend that lying is an alternative point of view. We do not give floor  to those who tries to cause a schism in the country. There is a clear distinction between impartiality and moral neutrality - the former is good and the latter is not. It is important for me that such things are noticed in our shop, ” Myroslava Barchuk said at the award ceremony.

This year the official event was opened by journalist, historian, expert of the award Vakhtang Kipiani with a lecture "Ukraine 2020: Lessons of Vasyl Stus".

The winners received cash certificates in the amount of 50 thousand hryvnias (around $1 700) and personal statuettes designed exclusively by Ukrainian sculptor Oleh Davydenko.

As IMI reported earlier, on November 9, the experts announced a short list of contenders for the award.