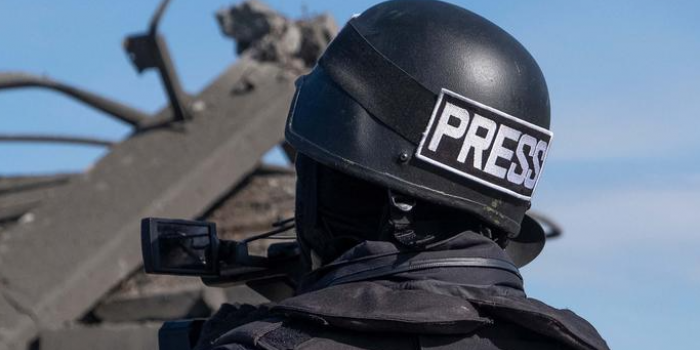 On May 31, the Verkhovna Rada passed Bill №7367 on the mandatory provision of bulletproof vests, helmets, and first aid kits to journalists that are being sent to work in the combat zone, as well as on the provision of insurance to them at the expense of the employer.

This was reported by Ukrinform with reference to people's deputy, Head of the "Servants of the People" party Olena Shulyak.

The document proposes to establish additional security guarantees for journalists working in conditions that are dangerous to their life and health, namely: in areas of military (combat) operations and/or in the temporarily occupied territories of Ukraine.

Thus, it is proposed to supplement Article 15 of the Law "On State Support of Mass Media and Social Protection of Journalists" with a provision according to which the media are obliged to provide journalists and other employees sent to work in areas of military (combat) operations and/or temporarily occupied territory of Ukraine with means of protection against firearm or shrapnel wounds, as well as with first aid kits.

In addition, Article 18 of the Law proposes a specified amount of one-time financial assistance in case of injury (concussion, trauma or wounds) suffered by journalists while performing their professional duties.

Also in the amendments to Article 7 of the Law of Ukraine "On Insurance" it is proposed to expand the list of mandatory insurance types.

As IMI reported, on April 11, Anastasia Lyashenko, a people's deputy of the "Servant of the People" faction, registered the bill №7367 that obliges media executives to provide bulletproof vests, helmets, and first aid kits to journalists that are being sent to work in the combat zone, as well as to provide insurance at the expense of the employer.

An International Journalist Insurance Fund has been founded in Ukraine. Representatives of independent media who go to the combat zone, the occupied territories, and the liberated territories (within one month after the liberation) can be insured. The foundation was initiated by six public organizations: Suspilnist Foundation, the Association of Independent Regional Publishers of Ukraine (AIRPU), Institute of Mass Information, Detector Media, the Center for Democracy and the Rule of Law, and the Institute for Regional Press Development.