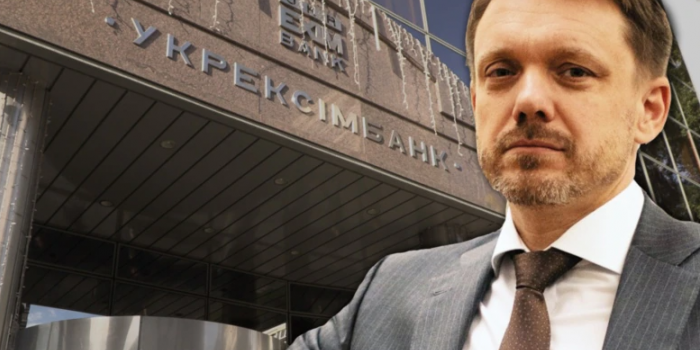 Chairman of the board of the state-owned Ukreximbank (Kyiv) Yevhen Metzher, who attacked the journalists of the Schemes TV program during the recording of an interview in the bank building, wrote a letter of resignation for the investigation period into the incident, the bank's press service said on Wednesday., as Interfax-Ukraine reported.

"My overly emotional reaction and unrestrained behavior towards journalists have no justification. I fully understand my responsibility. In order to remove at least some of the damage to the bank's reputation and divert the negativity towards its wonderful staff, I am immediately writing a statement of resignation as the chairman of the board during the necessary investigative actions of the National Police and an internal audit in the bank," the press service quoted Metzher as saying.

As Radio Liberty earlier reported, on Monday, October 4, the camera crew of the Skhemy (Schemes) television program was attacked during an interview with Ukreximbank Board Chairman Yevhen Metzher, allegedly because of one of the questions they did not like. According to the head of Schemes Natalia Sedletska, the bank employees took away two cameras, took away the cards on which the recording was carried out, and deleted the recorded video. According to journalists, all this time the camera crew remained locked in the office of the head of the bank's board in his presence. An hour later, the equipment was returned to the camera crew, but the video of the entire interview and the attack itself was removed.

The police in Kyiv reported that, at the request of journalists, the necessary investigative actions are being carried out, criminal proceedings have been started under Part 1 of Article 171 of the Criminal Code of Ukraine - obstruction of the legitimate professional activities of journalists.

Ukreximbank rejected the accusations of violating the law and, in turn, accused them of provocation and an attempt to seize banking secrets. According to the financial institution, the actions of the journalists contained signs of both illegal seizure of bank secrets and violation of the Code of Ethics of a Ukrainian journalist in terms of using illegal methods of obtaining information.

The bank said that in this situation, it is considering the possibility of contacting law enforcement agencies and bodies regulating activities in the field of television and radio broadcasting.

Metzher was appointed head of the bank's board in March 2020. The head of the supervisory board of the financial institution is an independent member Oliana Hordiyenko. Dimitri Chichlo, Serhiy Konovets, Dominique Menu and Laszlo Urban are also independent members of the Supervisory Board. The Cabinet of Ministers is represented by Yuriy Butsa, the Verkhovna Rada by Yuriy Terentyev, and the Office of the President by Viktoria Strakhova.

According to the National Bank of Ukraine, as of June 1, 2021, Ukreximbank ranked third in terms of total assets (UAH 252.350 billion) among 73 banks operating in the country.