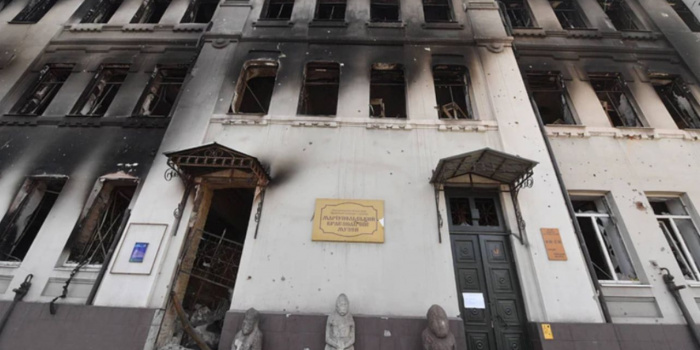 A narrative documentary podcast about the Russians' crimes against Ukrainian cultural heritage called "Why They Steal" is being launched in Ukraine.

This project is an initiative of the 435 FILMS company. According to the podcast's producer Anna Palenchuk, it will investigate the cases of Russians deliberately devastating and appropriating Ukrainian culture, writes Ukrainska Pravda.

Palenchuk noted that the Russian invaders have already destroyed hundreds of cultural heritage objects in Ukraine, took over the Melitopol museum with Scythian gold in it; the works of art that were stored in Mariupol local history and art museums have been taken away; a valuable collection of medallion art by Juchym Kharabet has been stolen, etc.

"The goal that our team lives by is that after the peace treaty is signed, Russia will give us back the cultural valuables ​​that are currently on its territory along with paying reparations.

The podcast's episodes will include opinions from lawyers, activists, directors of museums and nature reserves, as well as politicians, who will talk about the motives behind the Russians' stealing and tell the listeners about the evidence base. Also, the project will talk about possible ways to return the lost Ukrainian valuables.

"In this podcast, we remind people how much has been stolen from us and how much we need to get back, we talk about the rich and diverse Ukrainian culture, which Russia has been trying to turn into 'sharovarshchyna' for years," emphasizes the project's director Korniy Hrytsyuk.

The podcast will consist of five 20-minute episodes that will be released throughout October. The first episode about the stolen Scythian gold will be available starting October 6 on the "Ukrainska Pravda" website in the Podcasts section, as well as on Apple Podcast, Google Podcast, and Spotify.

As IMI reported, YouTube has created a special page for podcasts. Currently, the new feature is only available in the US.