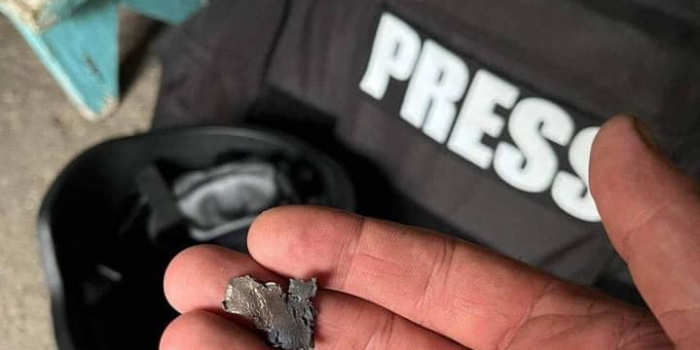 The Ukrainian Witness filming crew came under fire in Avdiivka on Thursday, August 11. The media outlet reported this on their Facebook page. The journalists believe that the shelling was deliberately targeting them.

According to the journalists, the serviceman who accompanied the group heard the sound of a drone, and shortly after that, targeted fire was opened. Journalist Оleksiy Prodayvoda pulled out a fragment from his bulletproof vest. "We are alright. Oleksiy is safe, alive, and healthy. Cameraman Оleksandr Davydenko, too. Our escort was also not harmed," reports Ukrainian Witness.

The publication quotes journalist Oleksiy Prodayvoda: "The three of us lay there for a long time – me, Sanya, and the soldier. We watched the houses burn after being hit by shells during the day; they saw us from their drone and fired eight rounds at us. Just a few meters away. Fortunately, there was a ravine and a ditch nearby, so we lay down there. Under the trees, too. I take off the vest and this thing falls out – a fragment. The soldier says that it got there on the way out already."

Separately, the publication notes that the UW filming crew was equipped in accordance with international requirements. "With PRESS written in large letters wherever possible. We have every reason to believe that those who opened the fire realized that they were shooting at journalists, since there are no military personnel in the area where the shelling took place. They aimed at people dressed in bulletproof vests with large PRESS inscriptions. Only the locals live there, and the local authorities come with a humanitarian mission every now and then," Ukrainian Witness said. 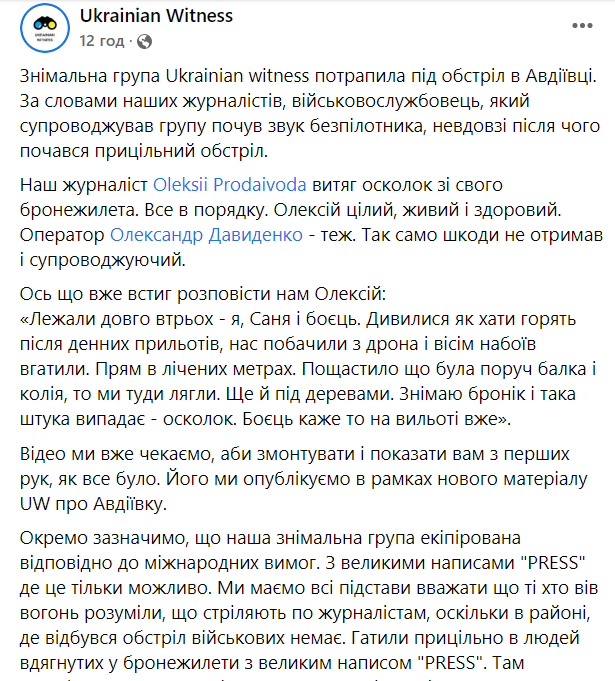 The journalists managed to shoot a video which they plan to publish as part of the new UW report about Avdiivka.

Ukrainian Witness is a new media project whose aim is to document the terrible events in Ukraine. The project was initiated by public activist Vitaliy Deinega, founder of the Come Back Alive foundation.