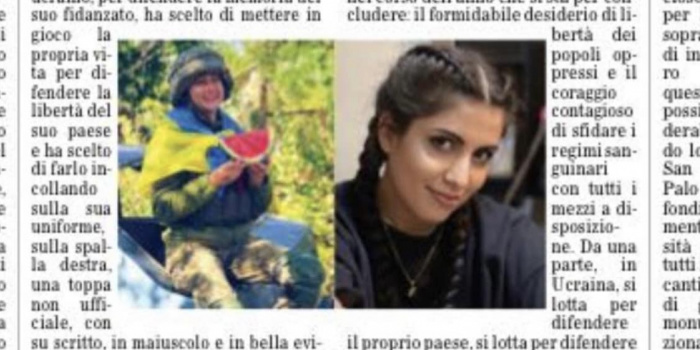 This was reported by the Ukrainian Embassy in Italy.

"Anastasia is defending Ukraine not only from Kremlin propaganda and lies on the information front, but is also fighting in the ranks of the Ukrainian Armed Forces. We are incredibly proud of our defender," the Embassy said in their statement.

Along with Anastasia, the publication chose Iranian journalist Maryam Vahindyan as the Person of the Year. She works for the "Harana" news agency – a media outlet run by a group of human rights activists.

"Anastasia and Maryam are our Persons of the Year because with their stories, their dedication, their strength they represent the feeling that has suddenly become prevalent during the past year – the oppressed peoples' fierce desire for freedom and their contagious courage to challenge bloodthirsty regimes by all means available," Il Foglio writes.

Anastasia Blyshchyk is a journalist and the fiancée of the late journalist and serviceman Oleksandr Makhov. In September, she announced that she had joined the Ukrainian Armed Forces. She worked for "Ukraina 24" TV channel.