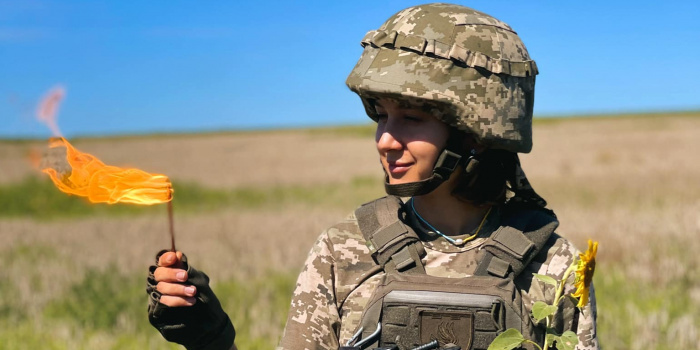 Journalist Anastasia Blyshchyk, fiancée of the deceased journalist and serviceman Oleksandr Makhov, joined the Armed Forces of Ukraine. She announced this on September 10 on her Facebook page.

"I can no longer remain silent. Have you seen the wonderful news from Kharkiv oblast? It's all because I'm here. Private Blyshchik for a month now. I serve the Ukrainian people!" she wrote.

We remind that Oleksandr Makhov, journalist and serviceman of the Armed Forces of Ukraine, was killed in action on May 4 near Izyum, Kharkiv region. He was 36 years old. In civilian life, Oleksandr worked on the channels Dom, Ukraina, and Ukraina 24.

On June 23, during the opening of photo exhibition The War Is Not Over Yet about journalists in the war, journalist, Ukraina 24 correspondent Anastasia Blyshchyk told the story of Oleksandr Makhov. He was posthumously awarded an Order "For Courage" III degree.

Anastasia Blyshchyk used to work on the "Ukraina 24" TV channel.