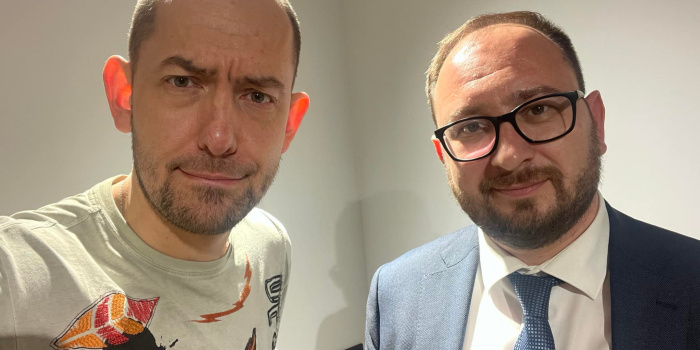 Mykola Polozov's Facebook
Roman Tsymbaliuk, UNIAN’s own correspondent in Moscow who is also Ukraine’s only journalist accredited in the Russian Federation, may be charged with extremism as several inquiries are set to be launched targeting him, as Ukrinform reported.

"The Russian government is so intolerant of any alternative opinion, except their own narratives, that they often go beyond common sense... The only Ukrainian journalist accredited in Russia, Roman Tsymbaliuk, seems to become outlawed in Russia. As usual, he is being accused of extremism. So far, they are going to initiate several administrative cases under Article 20.3.1 of the Code of Administrative Offenses of the Russian Federation (incitement to hate or enmity)," Polozov said.

According to the lawyer, it is important to understand the specifics of Russian law.

“The line between ‘administrative’ violations as regards extremism and ‘criminal’ offenses in the same field is very thin, largely depending on experts, whose contribution to cases where certain political interest on the part of the authorities is present is very predictable. Many experts believe that these articles are vague, blurred, and "flexible," which allows imposing the norm on pretty much any circumstances," Polozov said.

He stressed that an additional sign of a concerted attack on Tsymbaliuk was the latest spin across a number of fringe propaganda platforms of "various allegedly compromising reports, such as absurd allegations of espionage."

"Anyway, Russian authorities are exerting pressure on a foreign journalist, in fact depriving him of his right to freedom of expression and professional activity. I believe that such actions against journalists are unacceptable and the authorities will have to bear responsibility for them in independent international courts," said Polozov.

He added that he had agreed with Tsymbaliuk on representing his interests on all issues that "are of such interest to the Russian authorities."