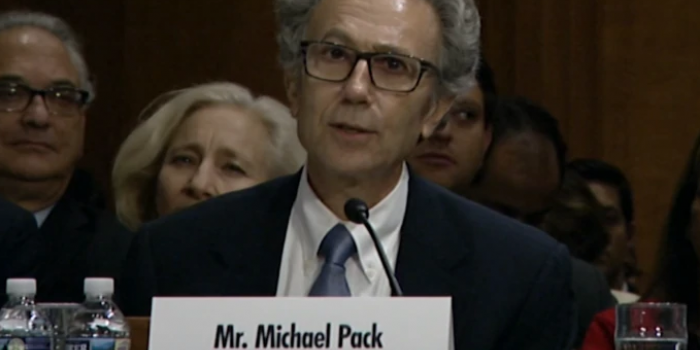 The head of the U.S. Agency for Global Media stepped down Wednesday afternoon at the request of President Joe Biden shortly after Biden took office, as Voice of America reported.

Michael Pack served for just over seven tumultuous months as the first chief executive of the agency under new legislation giving him expanded powers over the networks.

The former conservative documentary filmmaker’s tenure was marked with lawsuits, whistleblower complaints, a subpoena from Congress and court orders barring him from interfering with the operations of networks and grantees he oversaw, including Voice of America and the Open Technology Fund, which supports global internet freedom.

In a farewell statement to staff, Pack said he had been “solely focused upon reorienting the agency toward its mission and “to help the agency share America’s story with the world objectively and without bias.” Pack added that he believes “much needed reform” was achieved under his leadership.

Many of his actions, however, were condemned by critics on Capitol Hill and among press freedom and whistleblower groups.

In a letter shared by supporters of Pack and said to be his formal resignation, Pack described the incoming Biden administration’s request for his resignation as “a partisan act.” Pack added that his Senate confirmation had been for a three-year term so as to ensure the agency head was “untethered” to changes in administration.

A change in administrations typically has meant a mass turnover in political appointees or other high-ranking officials. Pack’s resignation came as many other appointees of former President Donald Trump resigned as the new administration took office.

Late Wednesday, the White House announced VOA program director Kelu Chao as acting CEO. An agency veteran, Chao has more than 20 years of experience at VOA, including as a field reporter, Hong Kong bureau chief, Mandarin service chief and East Asia division director. Chao last year testified as part of a lawsuit about editorial interference by Pack and his aides.

Chao will inherit several ongoing cases. Those include an investigation into alleged mismanagement of the agency ordered in December by the Office of Special Counsel.

There is also the lawsuit on editorial interference at VOA and two lawsuits related to funding and management at the Open Technology Fund and proceedings seeking to cut off OTF from federal funding. There is also a controversy surrounding the non-renewal of J-1 visas for international journalists working at the broadcaster.

More than 30 journalists from VOA’s language divisions lost their jobs and the right to remain in the U.S. over the last seven months because their specialized entry permits were not renewed under Pack.

Pack’s leadership at USAGM raised early alarms among the networks’ journalists and press freedom groups, who condemned his replacement of network heads and formerly bipartisan boards at the networks. Whistleblowers alleged numerous cases of gross mismanagement, retaliation and investigations into staff that had a debilitating effect.

On Pack’s last full day as CEO, a whistleblower protection nonprofit, the Government Accountability Project, sent a letter to lawmakers alleging that USAGM had spent at least $2 million in taxpayer money to pay a private law firm to investigate and compile dossiers on agency employees and the Open Technology Fund.

“This waste of government resources is shocking,” said David Seide, senior counsel at GAP, in a statement. “We believe it likely that additional investigation will further reveal violations of law, rule and regulation, abuse of authority and gross mismanagement.”

Pack’s actions also drew criticism from Republicans and Democrats in Congress. In September, the House Foreign Affairs Committee subpoenaed him after he canceled a scheduled appearance to testify.

“The U.S. Agency for Global Media’s mission is to further press and internet freedom around the world,” McCaul said. “In conjunction with the Open Technology Fund, the agency has a track record of success in providing internet access and other vital support to those in China, Iran, Russia and other authoritarian countries.”

McCaul added, “I hope the next CEO will focus on expanding the agency’s efforts around the world to promote a free and open press.”

Trump nominated Pack to lead USAGM, but the Senate delayed the confirmation for two years, until June 2020. It finally acted after Trump began attacking VOA’s coverage and demanded that Senate Republicans push the nomination through.

Democratic senators had raised concerns about the documentary filmmaker’s suitability for the role and about an investigation into alleged mismanagement at a nonprofit he founded.

The Washington, D.C., attorney general on Jan. 5 filed a lawsuit alleging Public Media Lab violated the District’s nonprofit corporation act and enriched Pack’s documentary company, Manifold Productions, by more than $4 million. The lawsuit calls for the court to order Pack to reimburse the funds and dissolve the nonprofit.

Manifold Productions did not respond to VOA’s request for comment.

In interviews with conservative media and talk shows and a January 15 op-ed in The Wall Street Journal, Pack defended his actions, saying he was working to address long-standing security concerns at the agency and perceived liberal bias in VOA content. Pack also accused his predecessors of “rubber stamping” J-1 visas and said the agency was using the process as a “pathway to citizenship.”

In his interviews, Pack often pointed to an investigation by his aides of VOA’s Urdu language service for airing a Biden campaign ad, as an example of that bias. In the Wall Street Journal op-ed, Pack said that as a Trump appointee he "would never have permitted a pro-Trump campaign ad to be broadcast on the VOA."

A whistleblower lawsuit alleging mismanagement and editorial interference says that around the same time as the Urdu investigation, VOA’s Spanish-language division published a President Trump campaign ad on social media. But in that case, the lawsuit says, VOA management dealt with the issue, unlike in the Biden example, where USAGM circumvented normal procedures in order to investigate directly.

USAGM policy states that editorial issues should be investigated by the news networks rather than outside officials.

At a court hearing in the VOA case in November, Pack and his aides were barred from directly interfering in the editorial independence of the network until the lawsuit is settled.

In his op-ed last week, Pack said the networks have “rebelled” against his decisions, claiming its journalists used contacts in media and Congress that led to an “unending flood of leaks, false press accounts, baseless lawsuits and inquiries from Capitol Hill.”

The op-ed was published days after at least 48 current and former VOA journalists and directors wrote to Pack, demanding the resignation of recently appointed VOA Director Robert Reilly and his deputy after one of the network’s White House correspondents was reassigned.

Pack received some outside support for his vision for the agency, including from two former employees. Ted Lipien, who until recently was editor of a blog frequently critical of the agency’s past leadership, and Reilly both said Pack was taking action to address long-standing issues.

In December, Pack appointed Reilly to lead VOA and Lipien to RFE/RL, and on Jan. 19 announced new conservative members for the network boards, including Roger Simon, a contributor to The Epoch Times who falsely described January’s deadly insurrection at the U.S. Capitol as a “false flag” operation, and Christian Whiton, who has defended Russia’s annexation of Crimea.

Pack was the first chief executive to enjoy expanded powers from Congress under 2017 legislation. More recently, lawmakers added more checks and balances to the role by inserting provisions into the National Defense Authorization Act.

The changes will prevent the CEO or federal employees from serving on any grantee board; and give the board power to advise the agency head to ensure they respect the integrity and independence of the networks, and to approve appointments or dismissals of network heads.

A massive spending bill passed in late December pauses these new limits for a period of 90 days, in effect giving Pack’s replacement or an acting CEO power to hire or fire network heads and make other changes within that time frame.