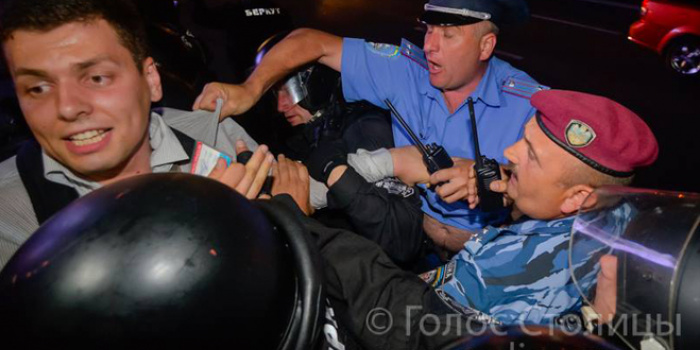 Kyiv. Ukraine. July 19 2013. Two biggest professional journalists’ associations of Ukraine appealed to the President of Ukraine with demand of urgent dismissal of Minister of Interior Affairs Vitaliy Zakharchenko few hours after the journalists beaten by the special police forces in downtown Kyiv. One of beaten journalists Andrew Kovalev of TV Channel 5 filed the complaint to Prosecutor General; the hospital confirmed his injures. The journalists were trying to cover the brutal police dismissal of a protest action at midnight at the Independence Square of capital Kyiv.

Independent Media Trade Union and National Union of Journalists in a joint statement call for dismissal of a minister and urgent reform of the police. Police brutality against journalists was a focus of attention of unions for long time. May 18 the police was calmly observing how two journalists were beaten in Kyiv; on July 19 the police attacked the journalists directly. Media unions consider the minister is not controlling his staff and demanding efficient investigation of police brutality from the Prosecutor General.

“The minister publicly promised to ensure the security of journalists; however he did not keep his word. In its present form the police is a danger to the society” – state media unions. The Ukrainian police had been notorious for violence, brutality and tortures against citizens and now it used violence against journalists.

The journalists unions call for police reform and demand to clear the police from uniformed sadists. The administration of the police should undergo re-certification in an open public process involving journalists and human rights activists. Independent Media Trade Union of Ukraine is ready to assign its members to observe police reforms.