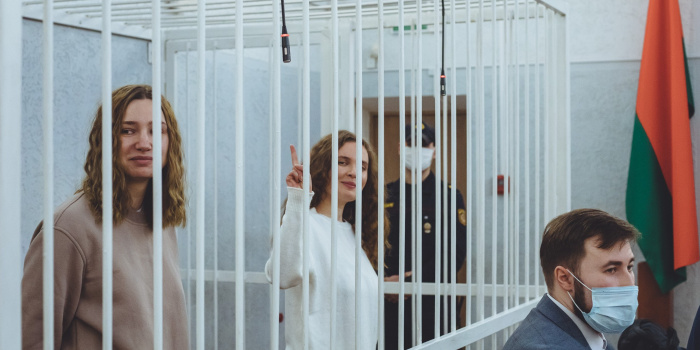 Two journalists for the Polish-funded Belsat satellite television station have gone on trial in Minsk on a charge of "organizing public events aimed at disrupting civil order," as Radio Free Europe/Radio Liberty reported.

Katsyaryna Andreyeva and Darya Chultsova were arrested on November 15 while they were covering a rally in Minsk commemorating Raman Bandarenka, who died from injuries sustained in a vicious beating by a group of masked assailants -- whom rights activists allege were affiliated with the authorities -- during rallies demanding the resignation of authoritarian ruler Alyaksandr Lukashenka.

The two journalists said as the trial started on February 9 that they were just doing their jobs as journalists at the event where they were arrested.

If found guilty, the two women face up to three years in prison.

Belarusian human rights organizations have declared Andreyeva and Chultsova political prisoners and demanded their immediate release and the dropping of all charges against them.

Lukashenka, who has run the country since 1994, was declared the victor of an August 9 presidential election, but opposition and public outrage over what they saw as a rigged vote has sparked continuous protests since, bringing tens of thousands onto the streets with demands he step down and new elections be held.

Security officials have cracked down hard on the demonstrators, arresting thousands, including dozens of journalists covering the rallies, and driving most of the top opposition figures out of the country.

Several protesters have been killed in the violence and some rights organizations say there is credible evidence some detained protesters being tortured.

Lukashenka has denied any wrongdoing with regard to the election and refuses to negotiate with the opposition on stepping down and holding new elections.

The European Union, United States, Canada, and other countries have refused to recognize Lukashenka, 66, as the legitimate leader of Belarus and have slapped him and senior Belarusian officials with sanctions in response to the "falsification" of the vote and the postelection crackdown.