TV crew with Pershyy Zakhidnyy driven out from hairdressing salon. Its employees farbade them to take pictures 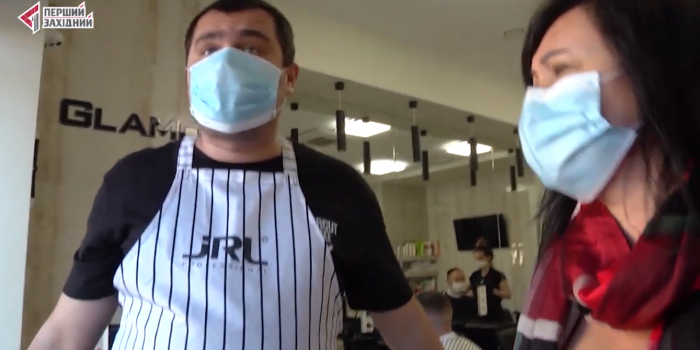 In Lviv, the journalists with Pershy Zakhidny TV channel were got out from a hairdressing salon, they forbade them to film, as Zaxid.net reported.

The incident occurred on 13 May in the hairdressing salon "Glamor" on the Soborna square in Lviv.

The journalist Ksenia Pavlyshyn and the cameraman Yuriy Kish were going to shoot a story on lockdown easing and on beauty salons and hairdressers resuming its work.

The video, taken by journalists, showed the journalists entering the hairdresser shop and asking permission to film. But they were denied to take pictures: the hair studio employees shouted at them and rudely kicking them out of the room. One of the hairdresser's employees used strong language.

The film crew left the premises and called the police. The journalists filed a complaint about fact of obstruction of their professional activity.

On May 14, the police probe into the fact.

According to Yaroslav Zhukrovsky, media lawyer and host of the Pershy Zakhidny TV, such an aggressivity would be caused by the fact that they have been violating some lockdown measures in the hair salon.

“In our opinion, this reaction was caused by the fact that there were more than 10 people in the room, not all workers wore face masks and gloves, as it was due under lockdown rules. All this is recorded in our video. The TV crew's staying there and the conversation indoors have been also filmed. We handed over all video materials together with the complaint to the police. Because if anyone prevents journalists from fulfilling their professional activities, they should be held accountable, ”Yaroslav Zhukrovsky said.