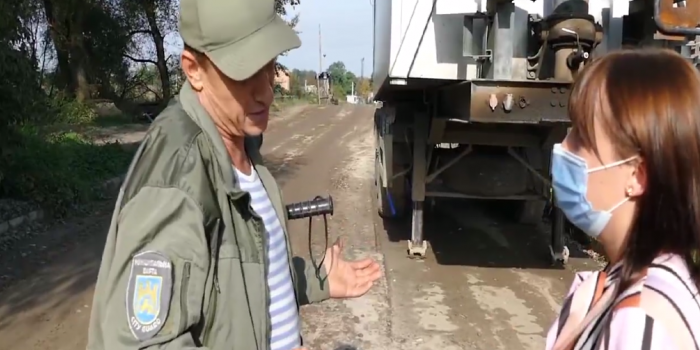 Photo credit: Screenshot from the video of The 5th Channel

On October 6, the TV crew of Channel 5 Lviv was driven away from the construction site of waste recycling plant in Lviv, as Channel 5 reported in its newsblock program "Chas Novyn” (News Time).

The security guard of the site refused entry for the journalist Olena Kordoba and cameraman Andriy Borysov to the territory, and threatened them with a rubber truncheon.

The employee approached the journalists, as soon as they started filming near the facility without entering the area. The video shows that the guard drove away the journalists, but it is reported that there is no sign of a "secured facility". The journalists were said that because of stories the journalists had been filming, the salaries of the workers who are preparing the site for construction were cut. "Our salary bonus have already been cut off, half a thousand ... because of you," he complained.

The journalist said that she had sent a letter to the press service of the Lviv City Council asking to comment on the incident.

In a comment to the IMI regional representative, journalist Olena Kordoba noted that they did not plan to file complaint with police, as they could film the story anyway and the security guard did not touch the equipment.