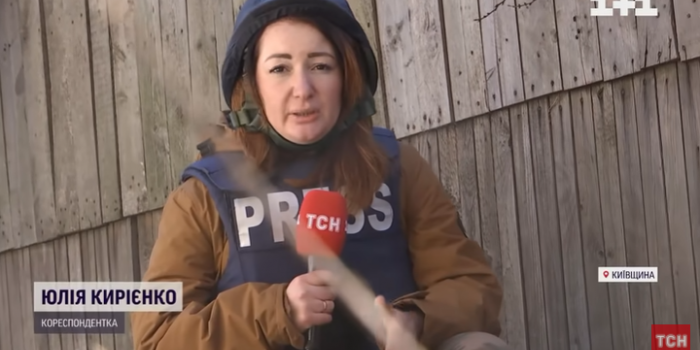 screenshot of the video of TSN

The TSN camera crew of Channel 1 + 1 came under artillery fire from the Russian occupiers in the Kyiv region on March 15, TSN reports .

Journalist Yulia Kiriyenko and cameraman Volodymyr Rybachok arrived at a position in the Kyiv region to interviewl the Ukrainian army how they detained Russian soldiers here the other day. They did not have time to begin filming, as the enemy began shelling from the occupied village. The shooting started as the TV crew was in the field and there was simply nowhere to hide. The only shelter for journalists was a ditch under the road.

During the calm, the group tried to escape by car, but due to the shelling they were forced to stop and hide in a private house.

"There were at least 10 explosions in those few minutes. The military was later told that an enemy drone was operating. The occupiers corrected the fire from it, ”Yulia Kiriyenko said.

Journalists still managed to escape. “It helped me that you prayed. I just felt the power of the word, ”said Yulia's colleague, military correspondent Borys Sachalko.

"We are used to seeing such a picture in Donbass, but here we still can't believe it's so close," said another military correspondent, Oleg Kornienko.

According to the journalist, enemy shelling in this direction of the front has not stopped for several days. "The occupiers are furious after the insane defeat when the military smashed their tank column. That is why they are taking revenge - shelling from afar both villages and roads used by civilians' cars, ”Yulia Kiriyenko said.