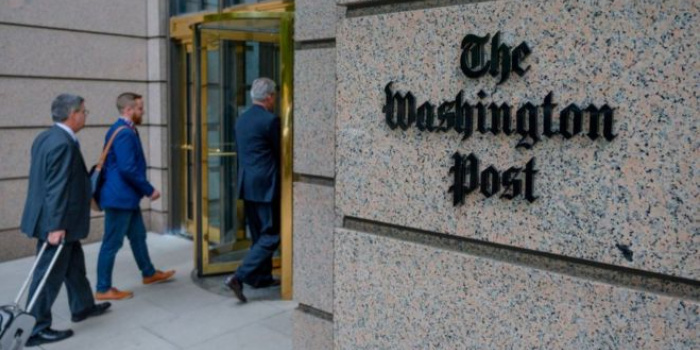 The Trump campaign filed a libel lawsuit against the Washington Post for “millions of dollars” on Tuesday for publishing “false and defamatory statements” about an alleged conspiracy with Russia, as Fox News reported.

The complaint obtained by Fox News was filed in the U.S. District Court in Washington D.C. by attorneys David C. Tobin and Charles J. Harder. It points to a pair of Post articles published in June 2019 that included statements tying the Trump campaign to foreign campaign interference.

“The statements were and are 100 percent false and defamatory. The complaint alleges The Post was aware of the falsity at the time it published them, but did so for the intentional purpose of hurting the campaign, while misleading its own readers in the process,” Senior Legal Adviser to Donald J. Trump for President, Inc. Jenna Ellis said in a statement, adding the Post reported “a conspiracy” as a fact.

The complaint claims that Greg Sargent’s June 13 article, “Trump just invited another Russian attack. Mitch McConnell is making one more likely,” contained the defamatory statement that Special Counsel Robert Mueller concluded that Trump’s campaign “tried to conspire with” a “sweeping and systematic” attack by Russia during the 2016 election.

The complaint called the remark “false and defamatory,” noting that the opposite is actually true.

“The Mueller Report concluded there was no conspiracy between the Campaign and the Russian government, and no United States person intentionally coordinated with Russia’s efforts to interfere with the 2016 election,” the complaint said.

A second Post article by Paul Waldman that was published on June 20 headlined, “Trump: I can win reelection with just my base,” included the comment, “Who knows what sort of aid Russia and North Korea will give to the Trump campaign, now that he has invited them to offer their assistance?”

The complaint said that this observation is also “false and defamatory” because there “has never been any statement by anyone associated with the Campaign or the administration ‘inviting’ Russia or North Korea to assist the campaign in 2019 or beyond.”

The Trump campaign feels the Post was “well aware at the time of publishing the foregoing statements that they were not true” but published then anyway.

“There also has never been any reporting that the Campaign has ever had any contact with North Korea relating to any United States election,” the complaint added. “Obviously, the Mueller Report is a public record that has been extensively reported in The Post.”

The complaint also claimed “there is an extensive record of statements from the Campaign and the White House expressly disavowing any intention to seek Russian assistance” and “there is not a shred of evidence that there have been any contacts between the Campaign and North Korea.”

The Trump campaign said it filed the lawsuit to “publicly establish the truth,” “properly inform” readers of true facts and “seek appropriate remedies for the harm caused” by the reporting.

“The articles at issue herein also are part of the Post’s systematic pattern of bias against the Campaign, designed to maliciously interfere with and damage its reputation and ultimately cause the organization to fail,” the complaint stated

“The Campaign was damaged in the millions of dollars, the specific amount to be proven at trial,” the complaint added.

In a statement to Fox News, vice president of communications for the Post, Kristine Coratti Kelly, said: “It’s disappointing to see the President’s campaign committee resorting to these types of tactics and we will vigorously defend this case.”

Ironically, the Post published an opinion piece on Saturday that declared the “lawsuit against the New York Times is almost certainly dead on arrival in the courts” and "exemplifies the threat the Trump presidency poses to First Amendment values and freedom of the press.”

The Times lawsuit seeks "compensatory damages in the millions of dollars," as well as punitive damages and legal fees. Knowing that then-Special Counsel Robert Mueller was about to exonerate President Trump, the campaign argues in the lawsuit, the Times sought to quickly "damage" the president's campaign "before the Mueller Report would be released debunking the conspiracy claims."

In a statement, the Times shot back: "The Trump Campaign has turned to the courts to try to punish an opinion writer for having an opinion they find unacceptable. Fortunately, the law protects the right of Americans to express their judgments and conclusions, especially about events of public importance. We look forward to vindicating that right in this case."