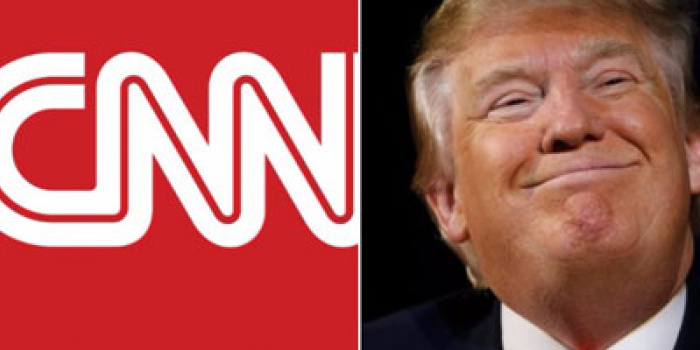 President Trump’s re-election campaign filed a libel lawsuit against CNN on Friday for publishing “false and defamatory” statements about seeking Russia’s help in the 2020 election, as Fox News reported.

"The complaint alleges CNN was aware of the falsity at the time it published them but did so for the intentional purpose of hurting the campaign while misleading its own readers in the process... the campaign filed this lawsuit against CNN and the preceding suits against The New York Times and The Washington Post to hold the publishers accountable for their reckless false reporting and also to establish the truth,” Senior Legal Adviser to Donald J. Trump for President, Inc. Jenna Ellis told Fox News.

Fox News obtained the complaint, filed in the U.S. District Court for the Northern District of Georgia where CNN is located. It states in part that CNN claimed Trump’s campaign “assessed the potential risks and benefits of again seeking Russia’s help in 2020 and has decided to leave that option on the table.”

The complaint said that CNN was well aware the statements were false “because there was an extensive record of statements from the Campaign and the administration expressly disavowing any intention to seek Russian assistance” but promoted the claim anyway.

“The Campaign therefore was left with no alternative but to file this lawsuit to: publicly establish the truth, properly inform CNN’s readers and audience (and the rest of the world) of the true facts, and seek appropriate remedies for the harm caused by CNN’s false reporting and failure to retract and apologize for it,” the complaint said.

CNN did not immediately respond to a request for comment.

Trump has long feuded with CNN and regularly refers to the network as “fake news.” Ironically, CNN president Jeff Zucker helped increase Trump’s fame when he greenlit “The Apprentice” while overseeing NBC years before Trump entered the world of politics, but the two have since had a public falling out.

The article referenced by the complaint was published on CNN.com on June 13, 2019.

Larry Noble’s CNN story, headlined “Soliciting dirt on your opponents from a foreign government is a crime. Mueller should have charged Trump campaign officials with it,” was labeled as an opinion piece and featured a disclaimer that Noble is a CNN contributor but the commentary is solely his own view. However, the piece states that Trump’s campaign “assessed the potential risks and benefits of again seeking Russia's help in 2020 and has decided to leave that option on the table” as a fact and was still on CNN’s website as of Friday afternoon.

The complaint notes that the Trump campaign “has repeatedly and openly disclaimed any intention to seek Russian involvement in the 2020 election” and “examples of this are too numerous to fully enumerate.”

“False statements are not protected under the U.S. Constitution; therefore, these suits will have no chilling effect on freedom of the press. If journalists are more accurate in their statements and reporting, that would be a positive development, but not why these suits were filed," Ellis added.

The complaint also references undercover video footage taken by controversial Project Veritas that showed Zucker instructing CNN staffers to focus on impeachment and employees complaining that the network is biased toward the president.

The complaint said Noble, the CNN contributor who penned the article in question, also “has a record of malice and bias against” Trump.

Noble did not immediately respond to a request for comment.

“Noble has written numerous articles accusing the President of criminal activity, and of campaign finance and ethics violations, and has lodged a complaint against a Super-PAC which supports the President,” the complaint said. “CNN clearly had a malicious motive in publishing the Defamatory Article, and acted with reckless disregard for the truth.”

The complaint said CNN never reached out for comment or verification before publishing the “defamatory” article. Trump’s legal team is seeking a trial by jury and punitive damages in the “millions of dollars” as a result.

“CNN’s actions show willful misconduct, malice, fraud, wantonness, oppression and that entire want of care which raises a presumption of conscious indifference to the consequences, and accordingly the Campaign is entitled to an award of punitive damages against CNN,” the complaint said.