Tribunal for murdered journalists to open in The Hague - RSF 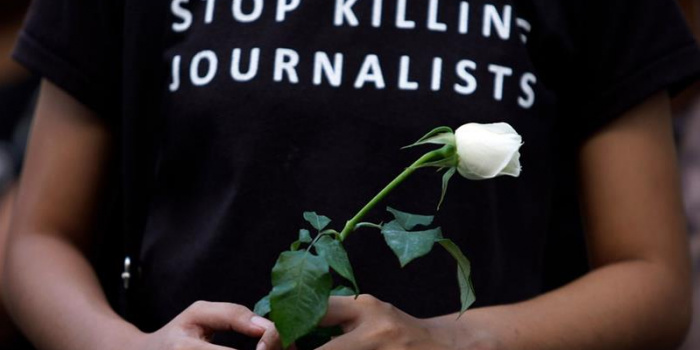 AP
In an unprecedented effort to achieve justice in the killing of journalists, three leading press freedom groups have launched a People's Tribunal to hold governments accountable. The Tribunal, a form of grassroots justice, relies on investigations and high quality legal analysis involving specific cases in three countries. The launch takes place in The Hague on 2 November and will be attended by international media and legal experts, as Reporters sans frontières reported.

Violence  against journalists is on the rise worldwide. Since 1992, over 1400 journalists have been killed, and in eight out of ten cases where a journalist is murdered, the killers go free. Responding to this ongoing impunity crisis, the People’s Tribunal on the Murder of Journalists, spearheaded by the Free Press Unlimited (FPU), the Committee to Protect Journalists (CPJ), and Reporters Without Borders (RSF) will officially commence on Tuesday, marking the International Day to End Impunity for Crimes Against Journalists.

The People’s Tribunal spans a six-month time frame, with this week’s opening hearing to be followed by three country-specific case hearings, and a closing hearing on May 3rd, World Press Freedom Day, 2022. The opening hearing will call on thirteen witnesses to deliver testimonies on the patterns of violence, the causes of impunity, and the responsibility of states. The Lead Prosecutor, renowned international human rights lawyer Almudena Bernabeu, will formally deliver the indictment to the panel of judges. The indictment contains charges against the governments of Sri Lanka, Mexico and Syria for failing to deliver justice for the respective murders of Lasantha Wickrematunge, Miguel Ángel López Velasco, and Nabil Al-Sharbaji.

People’s Tribunals are designed to hold states accountable for violations of international law by building public awareness and generating a legitimate evidence record, and play an important role in empowering victims and recording their stories. The People’s Tribunal on the Murder of Journalists consists of five hearings, taking place from 2 November 2021-May 3 2022, and will indict the governments of Sri Lanka, Mexico and Syria in three separate case hearings for failing to deliver justice for the murders of Lasantha Wickrematunge, Miguel Ángel López Velasco, and Nabil Al-Sharbaji. Each of these cases are marked by continued impunity, reflecting a wider pattern of violence against journalists.  By documenting these cases in detail,  the ways in which these States fail to honor their obligations under international human rights law will be illustrated, as well as the impact of impunity on victims, journalistic communities, and societies.

The opening hearing will take place from 09:00-18:00 Central European on Tuesday 2nd November 2021 in The Hague. To attend in person email [email protected], or online register via Zoom, or  tune into the livestream on the Tribunal website.

Almudena Bernabeu, Prosecutor of the People’s Tribunal on the Murder of Journalists, states:

“Freedom of expression is an essential human right. And yet, the frequency of grave violations committed against journalists coupled with prevailing high levels of  impunity  is alarming. It is time that states are held accountable.”

“I am participating in the People’s Tribunal to reveal the truth about how journalists are targeted by illegitimate governments who have so much to hide. The world needs to know the real facts and needs to act decisively to protect the free press.”

“I decided to participate in the Tribunal because I am worried about the attacks by states on our democratic rights. Statehood is a weapon that should be used to defend the liberties of the many. Wherever journalists are being murdered while reporting on corruption and organised crime, it is a sign that statehood is instead being used to protect the interests of the few.”