Trial over journalists started in Minsk 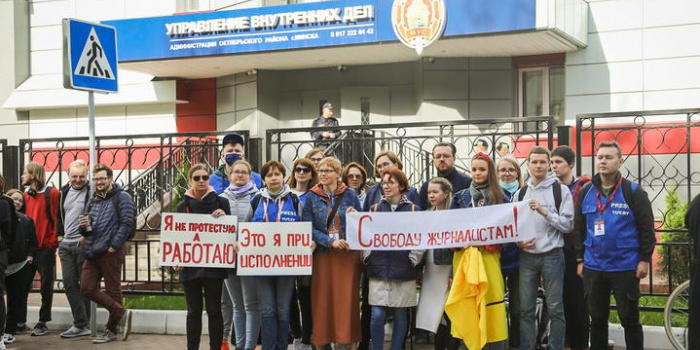 On September 2, the trial is to start over the journalists who had been detained on the eve, as they covered the student protests in Minsk. They are charged with participating in an unauthorized action, as Tut.by reported.

The journalists spent the whole night in the district police station of the Zhovtnevy district in Minsk, as Tut.by said.

Many people, including journalists came to support their colleaguesto the building of the Zhovtnevy District Police Department. Some journalists stayed the whole night under the ward in solidarity with the detained colleagues.

The journalists will be tried under Article 23.34 “Violation of the order of organizing or holding mass events”. It is punishable by a fine or administrative arrest.

The publication reminded that the reporters had been detained on September 1 near the Dynamo Stadium and taken to the Zhovtnevy District Police Department "for document verification." Reporters wore special "PRESS" vests. In addition, they had badges with a photo and the name of the publication they represented. During the detention, journalists performed their professional duties covering the events in Minsk.