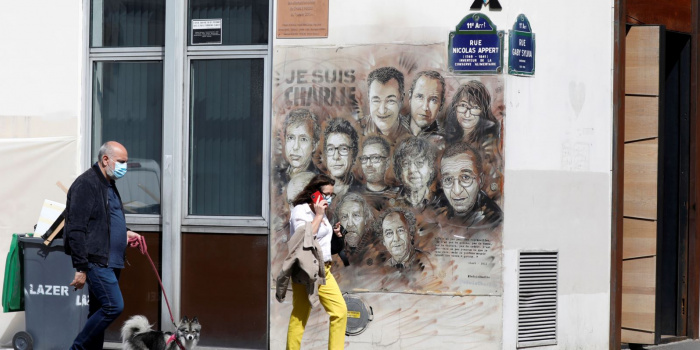 Fourteen alleged accomplices to the Islamist gunmen who attacked the French satirical magazine Charlie Hebdo in 2015 went on trial on Wednesday, as the country recalled a dark episode that marked the onset of a wave of militant violence; as Reuters reported.

On Jan. 7, 2015, Said and Cherif Kouachi, armed with automatic weapons, went on the rampage in the offices of Charlie Hebdo, whose satire on race, religion and politics tested the limits of what society would accept in the name of free speech.

They killed 12 people in an attack claimed by al Qaeda.

The next day, Amedy Coulibaly, an acquaintance of Cherif Kouachi, shot dead a female police officer. On Jan. 9, he killed four Jewish men at a kosher supermarket. In a video, he said he acted in the name of Islamic State.

The three were killed by police in different stand-offs.

Eleven of the 14 defendants appeared in courtroom modified especially for the trial, each watched over by two police officers wearing balaclavas and bullet-proof vests. They told the presiding judge they would answer the court’s questions.

Three are being tried in absentia. Hayat Boumedienne, Coulibaly’s partner at the time of the attacks, and brothers Mohamed and Mehdi Belhoucine, traveled to areas of Syria under Islamic State’s control days before the attacks and may be dead.

The defendants face charges ranging from supplying weapons and logistical help to financing terrorism and membership of a terrorist organization. No plea is entered under the French legal system.

“WE WILL NEVER LIE DOWN”

More than 250 people have been killed in France in Islamist violence since the attacks, which laid bare France’s struggle to counter the threat of homegrown militants and foreign jihadists.

Charlie Hebdo re-ran a series of cartoons on Wednesday depicting the Prophet Mohammad, including one of him in a bomb-shaped turban, that stirred outrage in the Muslim world when they were first published by a Danish newspaper in 2005.

“We will never lie down. We will never give up,” editor Laurent “Riss” Sourisseau wrote, explaining the decision to re-publish the cartoons.

Charlie Hebdo’s no-taboo journalism has for years divided France. Public opinion was again split over its move to re-print the cartoons. For Muslims, any depiction of the Prohphet is blasphemous.

“It’s an attempt at denouncing Muslims,” said retail worker Erraiss Loubna. “Charlie Hebdo ... puts them all in one box.”

Christophe Deloire, head of global media watchdog Reporters Without Borders, said it was an act of courage and a rejection of intimidation.

President Emmanuel Macron said France would remember those killed. The freedom to blaspheme went in hand in hand with the freedom of belief in France, he continued.

“Satire is not a discourse of hate,” the president told a news conference in Beirut.