"They were brainwashing the children ideologically," says hromada head of Shevchenkove about education under occupation 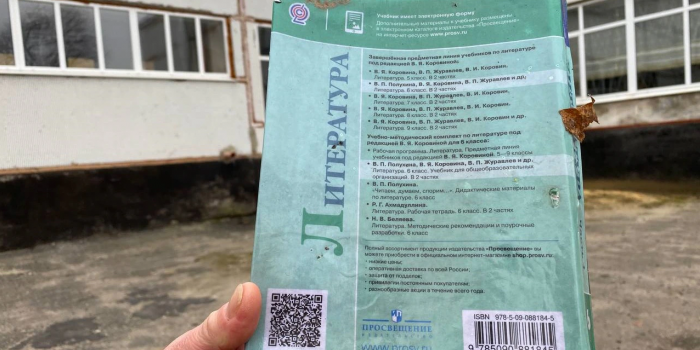 While a part of Kharkiv oblast was occupied, the Russians managed the children's education in Shevchenkove and Novomykolaivka villages, and planned to do the same in Velyki Khutora and Borivske. However, it only lasted six days, according to Radio Liberty.

In the ruins of a school recently destroyed by Russian missiles, one finds textbooks printed in Russia. According to the village council members, these books are "full of cynical Russian propaganda."

Some teachers from Shevchenkove (Kharkiv oblast) who kept working under Russia justify it by saying that they were "saving" the children's knowledge, says village head Valery Prykhodko. However, in his opinion, such "studies" exposed the children to danger due to the hostilities and the coronavirus.

Moreover, children were being brainwashed ideologically.

"The parents of one child came and told me about a so-called teacher, a brazen woman who had just recently resigned – she had said: saying "dobry den" ("hello" in Ukrainian) is wrong, say "zdravstvuyte" ("hello" in Russian) instead. She literally texted the parents: learn the word "zdravstvuyte" so that your child can say it when meeting someone," Valery Prykhodko says, recalling the details of teaching under occupation.

According to him, the invaders were using the teaching process to try and Russify the students, erasing everything Ukrainian. They wanted to start the school year according to Russian curricula and standards.

And now, the official says, there are three teachers left who refuse to resign and insist that by cooperating with the occupiers they were doing "good" and "saving" the children.

"And we all as the authorities, and, I am sure, our entire community will do everything we can to prevent these people from working with children: they are not worthy of teaching our children, they have betrayed them. And there is plenty of other fields to work in, besides education and schooling," Prykhodko believes.

Since September, Russian troops have no longer been able to shell the community with artillery fire. However, in October, rocket attacks began. The Russian army is trying to destroy the infrastructure: they have destroyed a part of the heating network; out of 11 schools, three have been destroyed completely, only four survived, the rest have no windows or doors; they are also destroying cultural facilities.

As reported by IMI, Kharkiv oblast prosecutors found Russian textbooks in the Lisna Stinka village gymnasium (Kupyansk district), which were imported here during the occupation.

While a part of Kharkiv oblast was occupied, the Russians were bringing in hundreds of textbooks that follow the Russian curriculum, and teachers were forced to attend "capacity-building courses" in Russian cities. Those teachers who refused to cooperate were taken captive by the invaders.