"They don't like how I'm breathing": Russian journalist documents her coronavirus-related death - RFE/RL 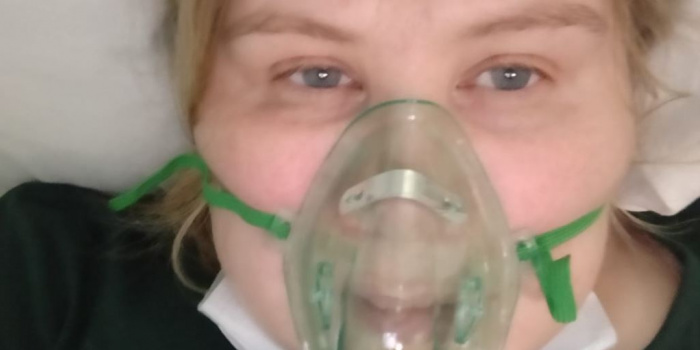 “Today should have been my first day of vacation,” Anastasia Petrova wrote on her Facebook page on the afternoon of March 23. “But instead it’s my first day of sick leave,”- as Radio Free Europe /Radio Liberty reported.

“During the night, I developed a high fever,” the 36-year-old journalist continued. “I had a sore throat and a nasty cough. I called the doctor and answered their questions about my contacts with people who had returned from abroad (there were three of them, but all had returned more than two weeks before).”

She added she’d been using ibuprofen in a bid to reduce her 38.4-degree Celsius fever.

Half an hour later, she wrote that a doctor had come to see her.

“She wouldn’t come in,” Petrova wrote on Facebook. “She questioned me from a meter away about my symptoms. She promised that someone would come to take a coronavirus test and that the results would come within 24 hours. In the meantime, she said I was not to leave the apartment for 14 days. But she added: ‘Don’t worry. No one has canceled the ordinary flu season this year.’”

That night, however, Petrova turned to Facebook again and wrote that her fever had spiked to 39 degrees and nothing was helping reduce it.

“No one came to take a coronavirus test and no one returned my calls, of course,” she wrote in the early morning hours of March 24. “I have no congestion, but am coughing.” Petrova noted that she set the privacy settings on her post to exclude her mother because “I don’t want to worry her.”

She called an ambulance, which took her to the hospital where she died on March 31. A journalist to the end, however, Petrova’s social-media posts and text messages to friends left a moving account of her lonely last days.

Petrova was a well-known figure in this Ural Mountains city of 1 million people about 1,500 kilometers northeast of Moscow. She was the respected editor of a business-oriented newspaper called Business Interest. Tatyana Cherepanova, head of the Perm branch of the Union of Journalists, told RFE/RL that Petrova moved the newspaper from one closely tied to the authorities toward an independent line.

“In conflict situations,” Petrova said in an interview with the professional journal Journalist in October 2019, “if we are talking about an honest businessperson who pays their taxes, we are always on the side of the businessperson.”

“Nastya was a hereditary journalist,” said Svetlana Danilova, editor of the Business Interest website. “She inherited all the best qualities from her mother -- including determination in pursuit of her goals. She was a smart, bright person. Nastya always won. She had the deceptive appearance of a Renaissance noblewoman, but was hard steel inside. It seemed as if everything came easily to her and that there was almost nothing she couldn’t do.”

A writer, painter, and single mother of two sons, Petrova was allergic to penicillin and had suffered several severe bouts of pneumonia over the years that left her lungs damaged.

In her next Facebook post on March 24, Petrova wrote that she sat for a long time in the ambulance in front of the infectious-diseases hospital while the paramedics argued by telephone over what to do with her. “They have no instructions about where to take people or how,” Petrova wrote. “No one has a clear idea about anything.”

In the end, she was taken to another hospital, where doctors cursed the first hospital for not admitting her.

Petrova was placed alone in a room with three beds, writing that as far as she could tell, many of the hospital’s other rooms were similarly occupied.

“They gave me a fever reducer and the standard medicines for treating the flu,” she wrote. “I was put on oxygen because they don’t like the way I’m breathing. Now I’ll have to stay in isolation for two weeks or get two negative coronavirus tests.”

A short while later, two respiratory therapists visited her and determined that she did not need to be placed on a ventilator. Nonetheless, she added, “When an emergency-room doctor is intently studying your chart, it is quite frightening.”

In the morning, Petrova gave samples for a flu test and a coronavirus test, as well as for “the entire traditional array of analyses.”

“Now, I wait,” she wrote. She posted a photograph of her breakfast, noting that it was served on disposable plastic dishware that she’d been instructed to throw away in a dedicated container.

Later that day, while still awaiting her test results, Petrova wrote to a friend that “neither my doctors nor I think that I have the coronavirus.” She added that “it isn’t necessary to close anything or set up a general quarantine because of me.” After an X-ray, she was officially diagnosed with pneumonia.

On March 25, she noted that for more than a day, her fever had held steady around 38 degrees. But she added that “I feel as if I’m constantly drowning in jelly. I don’t respond to anyone -- I don’t have the strength. I sleep about 90 percent of the time. I’m always thirsty. My results have not come back.”

The next day she wrote that her fever was on a “rollercoaster.” It spiked to 39 degrees until she was given medication. Then it spent five hours at 37 degrees, before rising again.

In the early afternoon of March 26, she reported that her first coronavirus test had come back negative. She confirmed that information in a second Facebook comment on March 29. Shortly afterward, she was placed on a ventilator, where she remained until she died on March 31.

In a press conference on April 1, Perm Oblast Health Minister Oksana Melekhova said Petrova’s diagnosis was “double pneumonia,” but that officials were still awaiting the results of her second coronavirus test.

Melekhova added that people who had been in contact with Petrova had been isolated and tested for coronavirus. “We have taken all epidemiological precautions,” she concluded, saying she would make public the results of Petrova’s test as soon as they were available.

On April 2, however, Petrova’s friend, local journalist Yulia Balabanova, posted a screenshot of a text message she received from Petrova on March 29 saying that “my second test was positive” and that she was feeling “very poorly.”

“I am publishing this fragment of our correspondence,” Balabanova wrote in a Facebook post that has since been deleted. “Nastya knew that her second test for coronavirus was positive. I don’t understand why her doctors aren’t talking about this. I think that it is important now that there be maximum transparency and complete information.”

Balabanova declined to comment further, telling RFE/RL she had already shared all the information she has.

A few hours after Balabanova’s post, Perm health officials changed Petrova’s official cause of death to “double pneumonia brought on by a coronavirus infection.”

Perm journalist Valery Mazanov told RFE/RL that Petrova’s story shows that officials are attempting to downplay the number of coronavirus cases in the country.

“By hiding such information, these irresponsible people are endangering dozens or hundreds or thousands of people,” Mazanov said. “After all, if a person dies of pneumonia, no one tests the people they have been in contact with.”

The numbers of pneumonia cases recorded this year are one of several factors feeding concerns that the authorities have been hiding the extent of the coronavirus in Russia and that the official figures -- which on April 7 stood at 7,497 confirmed infections and 58 deaths -- may be substantially lower than the real ones.

Dmitry Zhebelev, who heads the local Dedmorzim charitable foundation which grants wishes to orphans and ill children, told RFE/RL that local officials had told him they only received official results of Petrova’s second test on April 2 and they could not speak out officially before that.

He said that delays in publicizing such information could actually be beneficial because they might create the public impression that there are many undiagnosed cases at large.

“It might compel some people to minimize their social contacts out of fear of being infected,” Zhebelev said.

Acting Perm Oblast Governor Dmitry Makhonin responded to news of Petrova’s case by acknowledging that officials had been “silent” about her cause of death and declaring that “we must tell people the truth.”

“I will not tolerate lying in this regard,” he said on April 2, “especially by the region’s Health Ministry. Patients and the public must be told immediately about confirmed [coronavirus] cases.”

According to official figures, there have been 32 confirmed cases of coronavirus infection in Perm Oblast, as of April 7. Two people have died, while five people have recovered.

The region has been under movement restrictions since April 2, and police, National Guard troops, and volunteer formations have been patrolling city streets to enforce official orders.