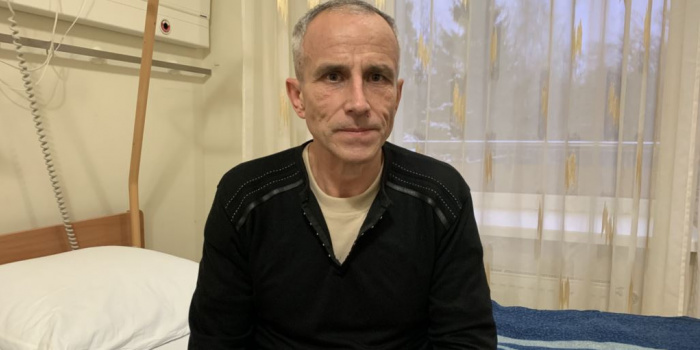 Released from captivity in Donetsk People’s Republic, Oleh Galazyuk, correspondent with Radio Liberty, said on December 29, that he had been accused of calling Donbass “occupied territory” and of taking DPR in quotation marks, as he said interviewed by Radio Liberty.

Oleh Galazyuk told, he had been detained on August 24, 2017 at the checkpoint Yelenivka (checkpoint of the DPR group), as he was leaving the territory.

“They put on a bag and drove me back to Torez. They have MGB in Torez. MGB is like SBU, people who had worked at SBU work there. Among them I saw my students whom I taught at the Torez Branch of the Kharkiv Institute of Economics and Market Relations. They recognized me and said: “Oleh Dmytrovich, what are you doing here?” So their attitude towards me was more or less tolerant. But I stayed with a bag on my head for three days, ” he said.

As Galazyuk told, these illegitimate detentions were made based on the articles of the Ukrainian Criminal Code: “Fighting Organized Crime”.

"That is, publishing stories on Radio Liberty was considered equivalent to “banditry” and “forming of organized criminal groups, " Galazyuk said.

He added his so-to-say "criminal case" mentioned that "my crime was that things obvious for all, like when I was saying “occupied territories”,  this was equated with "inciting ethnic hatred "and also" extremism”.

“They said it, they said I had committed crimes, since I called things by its proper names, that is to say, I said that the DPR was an area the world failed to recognize as such and it was occupied by Russia. There was also a conclusion of the so-called "expert" that I contested. This conclusion allowed to make equivalent putting DPR between quotation marks to a crime. I was going to write a story and to make such title for it: "For quotation marks of the word “DPR", you get 16 years in jail," - he said.

Oleg Halazyuk also told that the DPR had “sentenced” him to 16 years of “severe penal colony” and to four years of depriving him of right to publish stories in mass media and internet resources.

"I was sentenced on August 7, 2019 for espionage, extremism, inciting ethnic hatred and for cooperating with Radio Liberty," Galazyuk said.

Galazyuk said to have written truthful stories about life in the territories of Donetsk qnd Luhansk regions, which "helped people who left it to understand what was happening in the occupied territories."

Oleh Galazyuk is a professor of philosophy from Chistyakov (Tozer before the decommunisation), one of the authors of the column "Letters from the occupied Donbass" on the Radio Liberty, has been held in the captivity since August 2017.

As IMI reported, on December 29, 2019, thanks to exchange of prisoners between Ukraine and Donbas the journalists Stanislav Aseyev and Oleh Galazyuk, who were illegally detained in occupied Donetsk, could return to Ukraine.