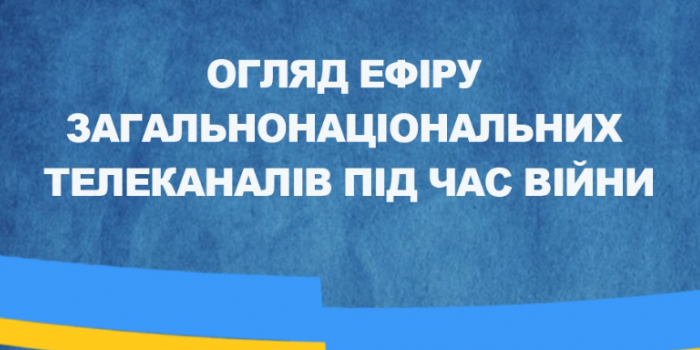 The Secretariat of the Commissioner for the Protection of the State Language informs that today, there are no TV channels in Ukraine that provide socially important information exclusively in the state language. These are the results of a review of the activities of 30 television and radio organizations that perform nationwide broadcasting under martial law, carried out by the Secretariat.

The review of the channels "showed the absence of information TV channels where the right of Ukrainian citizens to receive information about current events in Ukraine and the world in the state language would be fully realized."

Instead, the report said, a nationwide information marathon "United News #UArazom" was being broadcast on YouTube with a full russian simultaneous interpretation.

"In fact, these 15 TV channels have become the main source of information for Ukrainian citizens about events in the country and the world, which in numerous cases was presented in a non-state language," the Secretariat said.

"We note that the interviews and comments of Western leaders and their citizens, where a foreign language (other than russian) was being used, were mostly translated into Ukrainian. Only the information content (speeches, comments, words of support, appeals, etc.) made in russian was not translated (dubbed, voiced or subtitled, etc.) in the state language," the statement reads.

At the same time, on the YouTube platforms of some TV channels, the joint information telethon continued to be broadcast with simultaneous russian interpretation at the time of the review.

“Noting the rise of the Ukrainian language in the media, it should be noted that despite the full-scale war in Ukraine, the bilingual mode is being maintained in the information space. It could be assumed that the lack of a full-fledged Ukrainian-language information product during the war is due to lacking or limited financial, human, time resources and the need to provide important information about the events in the country as soon as possible. However, as we can see, there are such opportunities for a full simultaneous russian interpretation of a round-the-clock information telethon," said Taras Kremin, the language Commissioner.

In addition, violations of the Law of Ukraine “On Ensuring the Functioning of the Ukrainian Language as the State Language” were recorded in the activities of some TV channels.

In particular, NTN, contrary to the law, according to which distribution and screening of films in Ukraine should be carried out in the state language, showed the TV show "Evidence" and the movie "Only The Old Go To War" in russian with no state language dub.

NTN also recorded an advertisement (announcement) of two programs and a film announcement in a non-state (russian) language, which is a violation of the law, according to which the language of advertising on television and radio is the state language.

“It is worth noting that only five of the 30 TV channels broadcast exclusively in the state language. These are, in particular, those that mainly broadcast programs of enlightening and entertaining content, such as UA: Culture, UFO.TV, 'Inter-film,' 'Pixel TV,' 'PlusPlus,'" the statement said.