Such are the results of a national survey conducted by Rating sociological group on August 17–18.

34% of respondents use two languages to communicate at home, 13% use russian. More than half of the residents in the south and the east are bilingual, about a quarter are russian-speaking. The use of russian in everyday life has decreased by about half. 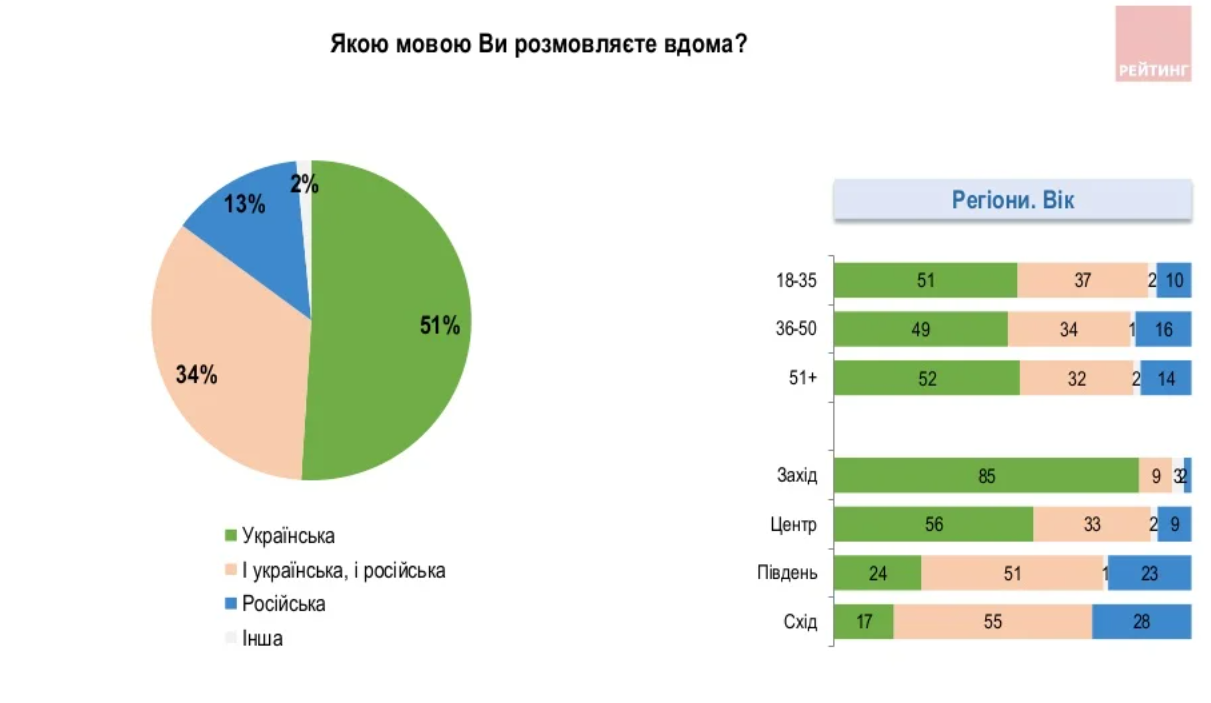 86% believe that Ukrainian should be the only state language. 10% support recognizing the russian language as an official in certain regions, only 3% are in favour of russian being the second state language in Ukraine.

Before the war, over a half of those interviewed used Ukrainian consistently, a quarter used the language sometimes, and every fifth respondent – occasionally or never. Over the past six months, the number of people who started talking in Ukrainian on a regular basis increased to 64%. 24% speak Ukrainian sometimes, 12% rarely or never. People living the south and the east, as well as IDPs, have started using Ukrainian more often. Since the beginning of the war, 19% of Ukrainians have switched to using the Ukrainian language always or more frequently. In general, since the beginning of the war, 41% of russian speakers and bilinguals began to speak Ukrainian more often, 24% of them now speak it constantly, 17% – more often.

The attitude towards russian-speaking Ukrainians is mostly positive (51%) or neutral (31%), only 14% reported a negative attitude. In general, as a result of the war, the attitude towards russian-speaking Ukrainians improved from 37% (April 2021) to 51% (August 2022), although in the last four months, the level of positive attitude has slightly decreased in favor of neutral, with no increase in negativity.

The survey interviewed 1,000 respondents aged 18 and older in all regions except for the temporarily occupied territories of Crimea and the Donbas, as well as territories where there was no Ukrainian mobile connection at the time of the survey.

The research was conducted via telephone interviews based on a random sample of mobile phone numbers. The representativeness error of the survey with a confidence interval of 0.95: no more than 3.1%.