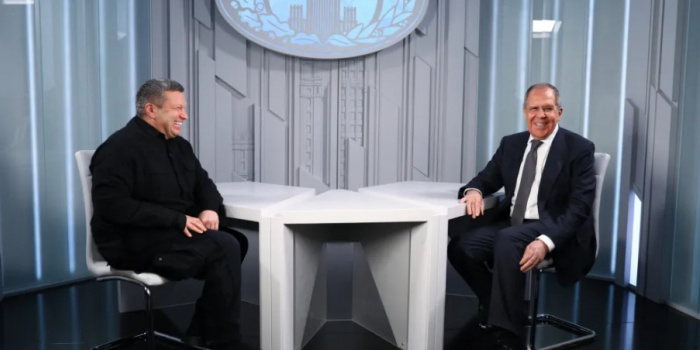 Dmytro Barkar, a journalist and analyst at the Institute of Mass Information, said that Russian propaganda has stepped up their anti-Western rhetoric lately, as they have nothing to lose and all diplomatic ties have collapsed.

He said this on Hromadske Radio, speaking about the ways that the Russian military and political leadership's propaganda has changed in 2022.

"Nowadays, they have stepped up their anti-Western propaganda rhetoric. Lavrov demanded a 'set of security measures' from the West, the Russian Federation showed a list of their demands to the US. They expected that the West would get scared and agree to something. Now that it has become clear that the US will supply weapons to Ukraine, Lavrov's rhetoric towards the West has become tougher, less diplomatic. One can hardly call him a diplomat. The difference between Lavrov and Soloviev is quite vague now – switch them one for the other, and no one will notice. The rudeness towards the West has increased, because apparently, they have nothing to lose in this direction, the diplomatic ties have collapsed," Dmytro Barkar noted.

He also pointed out that propaganda is having a hard time justifying the "special military operation" now.

"The consumer of Russian propaganda, who is used to this kind of tall tales, understands that special operations do not drag on for so long. They didn't make it in three days, so now they've switched to stressing that they would 'stand to the end.' The events are painted as a more global affair, as a 'war with NATO.' The standard of living has dropped due to sanctions and internal issues, military cemeteries are growing. These things are hard to explain by the 'special operation' alone," the IMI analyst noted.

Dmytro Barkar also added that the propaganda has been effective due to how long it has been working.

"The idea of 'Russia's invincibility' has been constructed for decades. Suddenly, the myth collapses and you have to make it work somehow. The nuclear threats peaked this summer. Now they are making excuses and try to imply that they meant something else: 'We have the weapons, we will use them if we are attacked.' All because there was a sense of a possible retribution; one must be careful in their statements if they are not sure of their triumph, because they will have to answer for their words," he said.