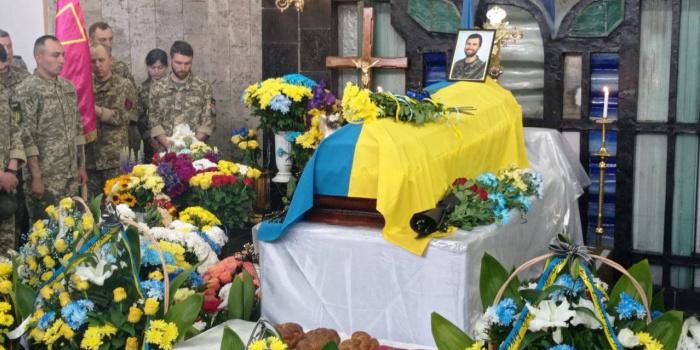 Ternopil bid farewell to 34-year-old journalist and serviceman of the Armed Forces of Ukraine Vitaliy Derekh.

This was reported by IMI representative in Ternopil region.

He was buried on the Alley of Heroes in Mykulynetsky Cemetery on June 2. He died on May 28 in Donbas while performing a combat mission.

According to the IMI representative, the day before, hundreds of Ternopil residents came to pay their last respects to the Archcathedral, where they traditionally bid farewell to soldiers killed in the russian-Ukrainian war.

It will be recalled that Vitaliy Derekh was a journalist for the "20 Khvylyn" newspaper, and had been on an editorial expedition to South Africa in 2013, among other things.

In 2013-2014, he participated in the Revolution of Dignity as part of the 15th Maidan Self-Defense Unit. He was rescuing people on Institutska Street on February 20.

In the spring of 2014, he volunteered for the Aidar Battalion, where he fought until July 2015. He was awarded the Order of Courage of the Third Degree, the Plast's Bronze Cross for heroic deeds (Vitaliy saved his comrade's life).

At the end of February 2022, he went to defend Ukraine again – in March, he took an active part in the battles near Kyiv, and then in Luhansk region.

He was curating the calibration of anti-tank weapons.

According to Vitaliy's friends, he died on May 28 in an air strike near Popasna.